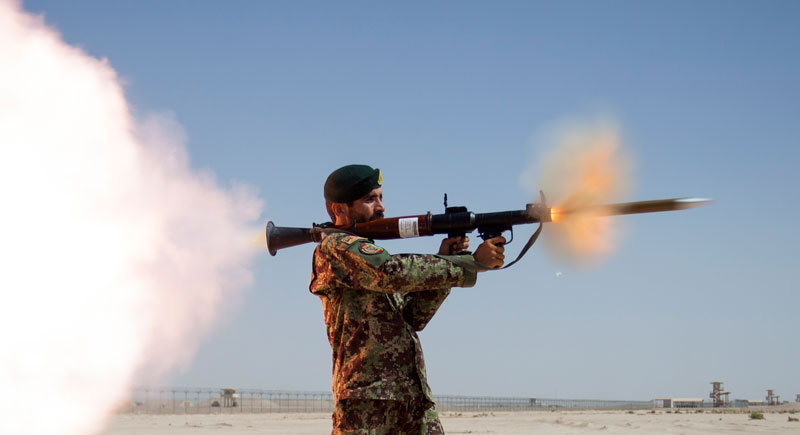 Since their introduction in operational service in 1961 the Rocket Propelled Grenade Mk 7 (RPG-7) over nine million RPGs have been produced, and hundreds of thousands fired in combat in war zones around the world.

Although RPG-7s proved their battle effectiveness in every conflict since the 1970s, NATO and coalition forces were surprised and ill prepared when they first encountered RPGs in Iraq in 2004. At the time these weapons were used primarily against heavy armored fighting vehicles, while Improvised Explosive Devices (IED) were directed at the less protected or unprotected tactical vehicles.

Realizing the gravity of this evolving threat, coalition forces began to protect their armored vehicles with add-on armor solutions designed to defeat RPGs. Since the PG-7VL High Explosive Anti-Tank (HEAT) warhead penetrates over 500 mm of steel armor with its shaped charge hitting the target, the only affordable solution was to eliminate the threat from hitting its target. Reactive add-on armor was an effective countermeasure applied to the heavier armored vehicles. Less protected vehicles were encapsulated with bar-armor cages.

The bar-armor cage is preventing RPGs from detonating their shaped charge close to the vehicle’s armor, thus penetrating the armor and causing severe internal damage. The cages are assembled from steel or aluminum bars. Bars are spaced in a form that would ‘trap’ the incoming warhead.

The operating mechanism of bar armor is simple and effective. As the RPG flies through the cage the warhead is smashed between two bars, deforming the conductive layers that form the ogive (cone) holding the piezoelectric precursor and covering the explosive charge. As the external liner bends in, it would touch the inner liner, causing a short circuit that disrupts the explosive triggering chain.

The first-generation bar armor made of steel or aluminum were relatively heavy, weighing about 20-30 kg/square meter. Follow-on solutions that included counter-RPG net came in much lighter weight but suffered from the same lower efficiency with the same neutralization mechanism. Although the method provided reasonable protection, it did not provide conclusive results. In fact, it is likely that every second RPGs would ‘slip away’ and defeat the bar armor protection, either with full hollow charge penetration of the shaped charge, or while having a secondary explosion and piercing the platform hull (without forming the plasma jet). Such risk is especially evident on the less protected parts of the armored vehicles. Ceilings are often composed of thin armor and are rarely protected by bar armor cages or nets; the windshield and side windows are also vulnerable to secondary explosions.

Hence, this RPG protection is referred to as ‘statistical protection’, since the efficiency of the armor is not conclusive, but dependent on where and how each RPG will hit. Typical effectiveness of bar armor in defeating various RPG-7 warheads depends on the type of warhead (different manufacturers produce HEAT warhead diameters from 70 to 90mm). Hence, statistical protection ranges from 50 up to 70 percent for first and second generation.

In recent years, new types of bar armor, net protection systems and various hybrid systems were introduced and applied to most of the vehicles deployed in Afghanistan. More recently, French vehicles operating in Mali and elsewhere in Africa are also equipped with counter-RPG protection, with high level of performance, attributed to the latest, most advanced non-bar type solutions.

The reactive armor, first introduced by the Israeli army in the first Lebanon war in 1982 proved highly effective against RPGs and anti-tank missiles, driving the development of tandem warheads. The RPG-7 received such a warhead, designated PG-7VR in 1988. These warheads were first employed against US armor in Iraq in 2004.

Insurgents, becoming aware of the bar armor and its weaknesses, have employed several methods to defeat bar armor, among them rudimentary extensions of the impact sensor (piezoelectric trigger located at the tip of the round). These extensions would cause the fuse to activate before the ogive is smashed by the armor, thus activating the shaped charge ahead of the armor.

While passive RPG armor technology is improving, particularly by reducing weight and improving the theoretical statistical protection, more progress on the side of the RPGs would render the systems relying on the ‘smashing‘ totally ineffective.

In recent years, RPG manufacturers have also introduced enhancements to overcome common bar armor techniques and nets technology. “RPG manufacturers are applying protective layers at the base of the cone, thus avoiding potential short-circuits caused by deformation,” an armor expert told Defense-Update. Challenged by these improved RPGs, armor designers are now seeking to find alternative solutions by employing mechanisms that would guarantee the defeat of the warhead regardless of the type of RPG they are encountering.

According to our sources, since 2012 some RPG manufacturers have added a durable plastic sheet between the two conductive layers forming the ogive. This sheet prevents the two layers from short circuiting in case they are smashed, thus rendering the ogive operational even after it has hit a bar or passed through a net. The damaged RPG will continue flying and will hit the vehicle, initiating the shaped charge on contact. “In fact, as it will hit at an angle, the behind armor effect could be increased, as the spall is distributed at a larger lethal cone, hitting more of the vehicle occupants,” the expert warned. “We are going to see more and more of these in the battlefield.”