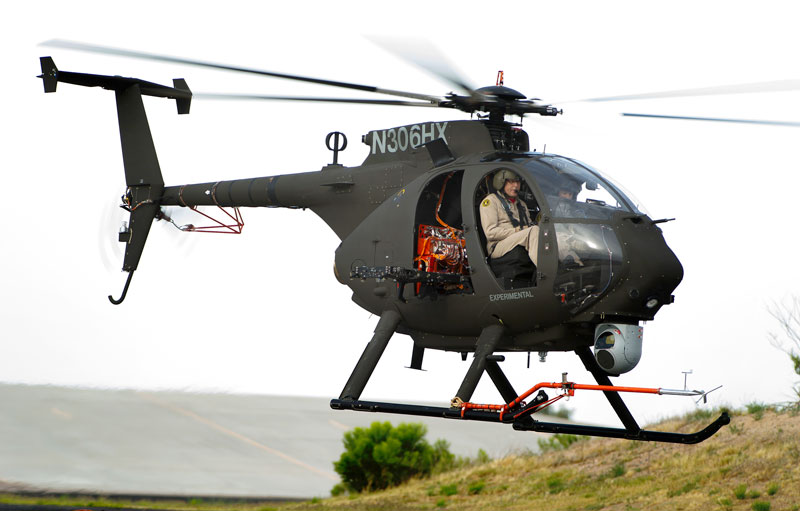 The AH-6i armed scout helicopter has made its first flight in its production configuration, moving the program another step closer to full-scale production, the manufacturer Boeing announced yesterday.

The AH-6i prototype of the helicopter flew on September 16, 2009. The helicopter is intended to provide close-air support for land-based forces and serve as an attack platform for destroying tanks, armored vehicles and fortifications. The new helicopter has been developed primarily for export, eying specific interest from several middle-eastern countries, including Jordan, Saudi Arabia. Chile has also expressed interest in the helicopter.

On that first flight Boeing pilots flew the aircraft for less than 20-minutes at low speeds in forward, rearward and sideward flight at low elevations during a recent test. Future tests will expand the flight envelope over the next several months.

“This first AH-6 flight in the production configuration takes us closer to delivering an advanced light attack and reconnaissance helicopter that meets the needs of defense forces around the world,” said Boeing AH-6 Program Director Scott Rudy. The aircraft will be produced at Boeing’s Mesa plant in Arizona, under the terms of an existing agreement with MD Helicopters.

The AH-6i is a single-turbine helicopter that is based on the combat-proven OH-6A Cayuse. It is an advanced variant of the AH-6M helicopter operated by the U.S. Army Special Operations Forces. Boeing has also proposed to provide SOCOM with an upgraded variant dubbed ‘AH-6S Phoenix’. According to Boeing, the new version incorporates advanced technologies from adapted from the AH-64E Apache attack helicopter.