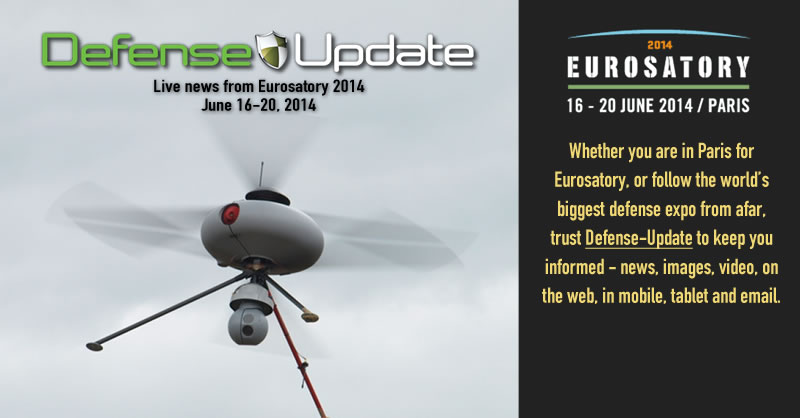 Eurosatory 2014, the biennial defense and security event takes place in Paris is just around the corner. As it evolved through the years Eurosatory has become the largest defense exhibition in the world. Taking place at the parc des expositions, Paris Nord, June 16-20, The exhibition is promising to be one of the largest defense and security events this year and sets the stage for the introduction of many innovations and breakthroughs in defense technology. This year Eurosatory will be hosting about 1500 exhibitors, up 5 percent from 2012.

Following are 10 exciting new technological areas and applications we intend to follow, that are likely to attract your attention:

Want to learn more about those trends? Subscribe to the full edition or join our email list to ensure you don’t miss the news!

Need a last minute hotel in Paris
for the next weeks?
For the best rates and 24/7/365 availability
we are recommending:

Our editorial team has based this list on countless visits, meetings, talks, conferences and exhibitions. But we also invite our readers to comment and send other suggestions for coverage, to enable our team to focus on the topics that are of importance to you. You are invited to send your suggestions through our groups in Facebook or Linkedin.

COGES, the exhibition organizers have analysed new trends from the list of exhibitors that have booked display space at the exhibition, and highlighted the following topics among the trends in this year’s event:

Among other exhibits and live displays expected at the event will be a wide range of weapons, ammunition, manned and remote controlled turrets, and over 250 different land and air vehicles, manned and unmanned to be displayed. Indoors, visitors can expect to witness the latest command, control, communications, networking and intelligence(C4) equipment and applications, as well as training systems and simulators.

Traditionally, Eurosatory provided much attention to force protection, in addition to aspects of early warning, countermeasures and active protection. While the numbers of combat vehicles being procured are diminishing, those vehicles acquired in the past decade were often designed with modular armor, which can be updated and improved. Additionally, applique armor are also provided for older vehicles, improving their protection against ballistic, blast, mines and IEDs, as well as biological, chemical or radiological (CBR). With the introduction of lighter and more protective armor systems, including revolutionary composites, ceramic/metal hybrids and nano-technologies, the protection for personnel, infrastructures and vehicles will undoubtedly continue to be a hot topic at Eurosatory.

Facing a growing irregular and terrorist threats, exhibitors at Eurosatory are also likely to highlight IED detection and countermeasures, mitigation, as well as counter-UAV capabilities, for early warning, targeting and defeat of these new threats.

The displays will also include a wide range of support capabilities, including fires – artillery and mortars, scout and reconnaissance and target acquisition systems (ISTAR) and combat engineering which nowadays include demining, route clearing and counter-IED missions. Combat service support also covers combat recovery and logistics which are also highlighted on the displays.

Eurosatory has become a key venue for companies involved in the manufacturing of very high-tech optical components. The event will host the entire supply chain of the Defense-EO market, from system integrators and Equipment manufacturers (OEM), to specialists in subsystems and key components such as detectors, optical components and assemblies, electro-optical and electro-mechanical assemblies for zoom, stabilization and measurement, glass, crystals, coating, fiber optics, lasers etc.

The field of ground robotics has undergone rapid changes in recent years. Military robotics was first implemented as means to replace the human operator in dangerous missions – particularly Explosive Ordnance Disposal. However, based on the vast experience of using robots in Iraq and Afghanistan in recent years, robots are increasingly used for area reconnaissance, or operations in hazardous environment, such as polluted areas. Smaller robots, equipped with advanced communications, used as repeaters are also becoming useful in operating inside buildings, or underground, in caves, tunnels, basements or sewers, where access by humans is difficult, hazardous or simply impossible.

Another evolving trend is the use of robotic vehicles in logistical and support missions, employing autonomous vehicles in unmanned convoys or carrying supplies in support of dismounted troops. These robotic ‘mules’ are supporting troops in more than one way – in addition to carrying heavy loads, they also deploy sensors, mount remotely controlled weapons, provide electrical charging, and carry protection systems for the troops. [Back]

As the military is shifting from the traditional, linear battlefield to asymmetric, rapid deployment contingencies, smaller task forces that are often required to operate far from home, must rely on extensive support thousands of miles away. Broadband, satellite communications is bridging this gap, providing deployed elements with efficient reach-back to support intelligence collection and assessment, command and control, combat service support and, in some cases, even kinetic operations. To sustain those capabilities military forces rely on dedicated military and shared commercial satellite operators, and new generations of small, compact and highly efficient terminals, enabling the use of broadband SATCOM on vehicles, on the move. In addition, manpack and pan portable SATCOM is also supporting dismounted teams and special operations, even when they are communicating from hidden, or covered locations. [Back]

Meeting the growing demand for power

Electrical power is a key aspect for all military operations, from the weapon systems, with rough surveillance and communication systems, to provision of automotive power. Coping with the growing demand for electronic devices, electrical power generation on vehicles and dismounted has been a major issue. Among the solutions currently discussed are the use of higher density batteries, backup solar power, wind power, harvesting power and more effectively managing power usage, as well as designing systems for overall low power consumption by the different applications employed by the soldier. [Back]

Defense Update will continue these previews, to be followed by on-site reports beginning on June 15. You are invited to join our email list to ensure you don’t miss the news!