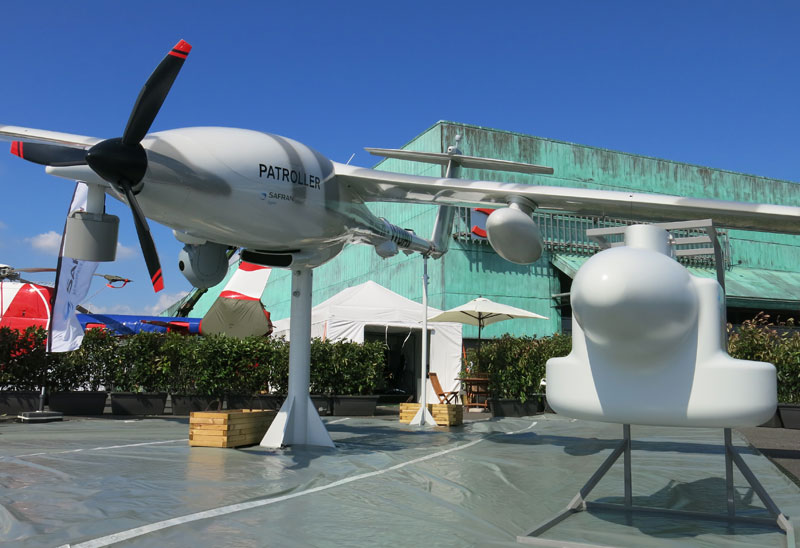 The acquisition of new tactical drones for the French Army was included in the current five year plan (2014-2019), released by the defense ministry earlier in 2014. At the time only one option was on the table – Watchkeeper, a mature tactical UAS system developed by Thales, that has recently won the British type certificate of operation after a long process that has taken years and delayed operational fielding of the drones.

The British side was eager to offer the drone, and the French buyers were also hopeful that the developmental cost associated with developping a new system could be avoided. But Paris wasn’t ready to remain a buyer, and demanded London to select  the VBCI developed for the French Army for British service.

Until further decisions are made, the British Army is intending to send the Watchkeeper to Afghanistan later in 2014, with elements of the 32nd field artillery regiment, where it is expected to support elements of the French contingent during their final deployment to the country. It will be an opportunity for the French Army to get to know the system – assess its contribution to its military forces on contingency operations.

Watchkeeper can carry about three times the payload weight of Sperwer, flying missions with about three times longer endurance. While originally developed to support launching by catapult, it is operated mainly from runways. The British requirements called for operation from unprepared runways, which required the redesign of carriage and wing mount. The French Army has been using drones since 2001, fielding 25 systems of the Système de Drones Tactiques Intérimaire (SDTI) developed by Sagem.

SDTI, also known as Sperwer is a delta-winged drone that takes off from a catapult and lands by parachute. This operational method enables the Sperwer to deploy with military forces anywhere they are sent, even to locations without landing strips. However, the relatively short mission duration and high speed of the delta design took a toll from these drones. Between 2008 and 2012 the French 61 artillery regiment that operated the SDTI in Afghanistan lost 12 aircraft, flying about 2,000 missions, 50% of the losses occurred on landing.

Since 2001 Sagem has produced 25 Sperwer systems and about 150 aircraft to support several operators – France, Canada, Netherlands and Denmark – of which only the French Army remained loyal to the system. The DGA continued to order replacement aircraft in 2012 (five) and 2013 (five). In addition, improvements were made to the EUROFLIR EO payloads, improving their geo-location capabilities.

Although Sagem introduced several improvements to the Sperwer, this specific line was discontinued for a different design, based on a commercial (manned) powered glider – the German Stemme S-15. The main reason for the decision was that such platform would be easier to receive flight worthiness certification in France and Europe, as it is based on an EASA-certified platform – an obstacle that is yet insurmountable for the US Predator and Reaper. The drone designated ‘Patroller’ is a one-ton class, long endurance UAS optimised for military, homeland security and maritime missions.

It carries payloads up to 350kg capacity combining a wide variety of sensors as well as a wide-band Satcom datalink carried at the payload bay, nose and under the wings. At Eurosatory the Patroller was displayed with several new payloads, demonstrating the new EUROFLIR 410 EO payload, radar and SIGINT that can be carried underwing.

The drone can operate on missions up to 20 hours, at an altitude up to 20,000 ft. Between April and June 2014, the Patroller flew 30 flights over France, as part of a test campaign, evaluating the new Euroflir 410 gyro-stabilised EO turret. This payload provides extended identification capabilities in day and night. In addition, this Euroflir 410 variant is fitted with very high resolution spotter and a Matis AP IR camera.

New options on the table

Seeking a replacement for these SDTI, the French Army has three basic options – obtain a modern aircraft that can fly longer missions and carry more payloads, but must operate from prepared airfields, or at least unprepared airstrips; choose a smaller drone that may fly longer missions, but carry less payloads, meaning that most of the investments in mission systems acquired for Sperwer would be lost. A third option could be to split the mission between different platform – carry out some on medium altitude, long endurance (MALE) drones that will be deployed from fixed sites while other other drones, designed for forward deployment with the tactical echelon will carry out other missions. These could be single payload carrying drones, launched by catapult or capable of vertical takeoff and landing (VTOL).

The hesitance of the French authorities to force a solution on the market is reflected by the expectations that the French procurement authority DGA will soon publish is an international tender, opening the tenders beyond the French primes, to bidders from two of the nations leading in the UAV market – the USA and Israel. Among the potential bidders for such programs, is Airbus Defense and Space that has displayed a model of the Shadow M2 from Textron at At Eurosatory.

Dassault also unveiled a model of its own MALE 2020, whose design can be traced to General Atomics Predator B Reaper with some modifications. Earlier in 2014 the governments of France, Italy and Germany announced their intention to fund a two-year study of a MALE 2020 concept to be based on European knowhow.

At the lower end, bidders could offer vertical take off and landing, such as a new version of the Drac, also displayed at Eurosatory by Airbus Defense and Space. It is equipped with quad-rotors and an improved gyro-stabilized gimballed EO payload mounting multiple sensors. IAI could also be playing a role, offering the Panther tilt-rotor aircraft that could support the forward area segment of the program, carrying various payload and supporting extended mission endurance by using a hybrid propulsion. Another US potential candidate worth consideration is Boeing/Insitu offering the RQ-21A Blackjack.

The system has entered operational service with the US Marine Corps and is also planned to enter service with the Dutch Army, that has used Sperwer in the past. It’s flight endurance is over twice that of the Sperwer, but the payload capacity is less than half. Moreover, the Blackjack is depended on proprietary launch and retrieval systems that could make its deployment more complex from a logistical point of view.

If the tender is indeed opened to international players it is likely that Israel’s Elbit Systems would also get involved with its successful Hermes 900, which has grabbed eight orders in less than five years. Hermes 900 has much commonality with the Hermes 450, that is providing the basis for the Watchkeeper. Elbit is also offering the Hermes 90 which is designed for catapult takeoff and landing on unimproved landing strips, an element that could be interesting for the French.