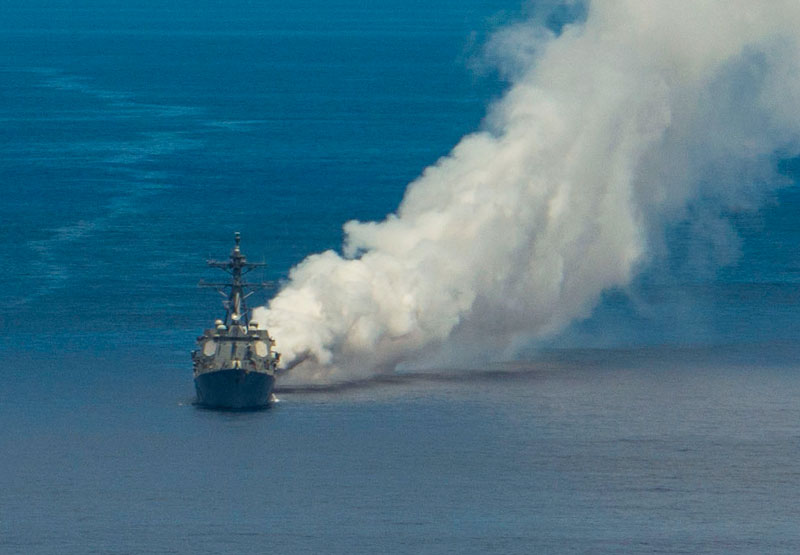 The US Navy has recently tested a new anti-ship missile countermeasure system using an obscurant generator prototype. The systems and tactics were tested under a variety of at-sea conditions using assets from the U.S. Army, Navy, and Air Force to evaluate how radar-absorbing, carbon-fiber clouds can prevent a missile from detecting and striking its target as part of a layered defense.

The Naval Warfare Development Command tested the maritime obscurant generator prototypes June 21-25 to assess their tactical effectiveness for anti-ship missile defense. The shipboard device generates carbon-fiber particles suspended in a cloud of smoke. These particles absorb and diffuse radar waves emanating from the seekers of incoming missiles, thus potentially obscuring the target from the missile’s seeker.

“Pandarra Fog showed the value of quickly bringing together scientific and joint forces to tackle our hardest warfighting problems. This isn’t just smoke or chaff, this is high tech obscurant, which can be effective against an array of missile homing systems,” said Antonio Siordia, U.S. Seventh Fleet’s science adviser.

The experiment demonstrated maritime obscurant generation can be a key enabler of offensive manoeuvre of the fleet despite the global proliferation of anti-ship cruise and ballistic missiles.

“We are developing a layered approach using a full spectrum of active and passive capabilities to give us the advantage. It is not just about the technology, but also practicing how the fleet will employ these emerging capabilities,” said Capt. David Adams, who leads the Seventh Fleet Warfighting Initiatives Group. “A defense in depth approach has a lot of advantages. Not only do we know the smoke is effective, it adds a level of uncertainty and unpredictability to the equation,” said Adams.

In addition to having a significant level of effectiveness, the systems are relatively inexpensive when compared to other countermeasures and can be tactically employed through typical fleet maneuvers. The materials are environmentally friendly and sized to maximize operational effectiveness. “Our initial assessment is the testing was very successful in terms of tactical employment, usability and cost-effectiveness,” said Adams.