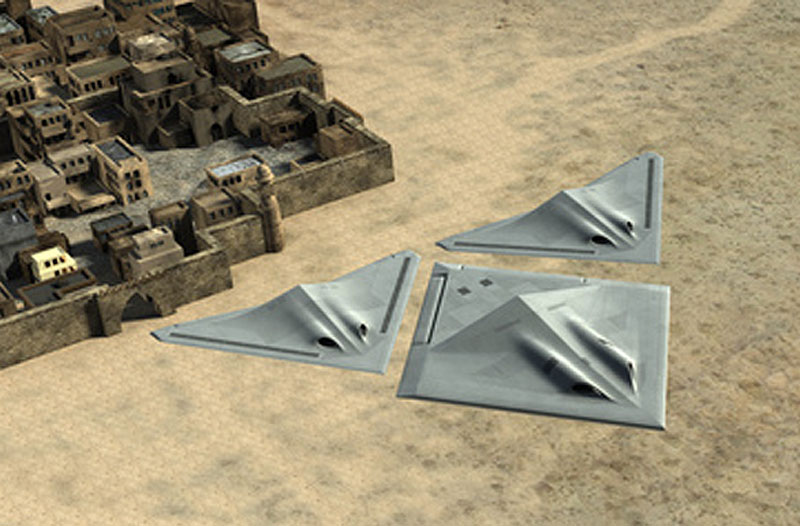 Scientists and engineers at BAE Systems have lifted the lid on some futuristic technologies that could be incorporated in military and civil aircraft of 2040 or even earlier.

Among the technologies depicted in this short video clip are self healing surfaces and airframe parts that can heal themselves in minutes. Another variant of this platform is shown in the video, used as an air defense platform is carrying a laser weapon to defeat precision targeted air-to-ground missile launched against a high value target.

Another concept depicted on the video is a that of an unmanned transformer aircraft, composed of several autonomously controlled elements that can be joined into a single flying platform, or split, to carry out individual missions.

An intriguing twist of the ‘transformer’ concept is the use of on-board 3D printing to create an ad-hoc ‘single use’ UAV to perform a specific mission. On the video clip, such UAV comprised of two individual vehicles, a reconnaissance carrying an embedded heavy lift quadcopter are printed on board a ‘mothership’, launched on a mission to find and rescue a person.

Experts at BAE Systems’ Research and Development team at Warton are offering an unique insight into some ‘drawing board’ technologies that would normally be kept well under wraps. The team works with the UK’s leading aviation thinkers from universities, Government and a whole range of companies to predict and explore how aircraft engineering might evolve. Based on their thinking, the four futuristic concept aircraft technologies have been brought to life in short animations.

Nick Colosimo, a Futurist and Engineering Manager within the R&D team said: “Of course we don’t know exactly what sorts of aircraft technologies will be used in 2040 with any certainty, but it’s great to be able to show the public some concepts that might be possible through projecting where today’s technology could get to. BAE Systems has a rich heritage in research and development, and our team builds on literally decades of previous R&D work by thousands of scientists and engineers.”

Research and development has always played a key role in BAE Systems’ defence, aerospace and security business, with the Company investing £117M of its own capital in R&D in 2013.