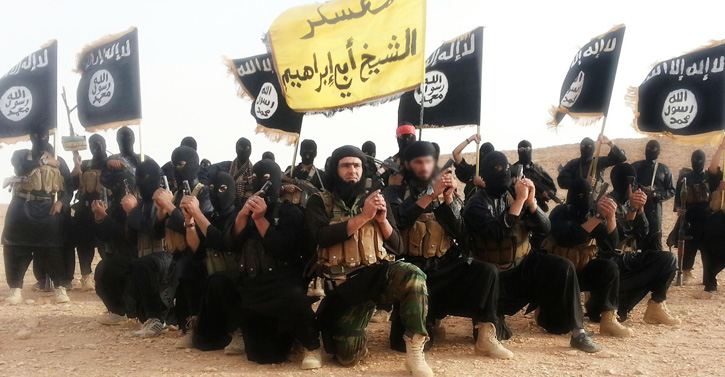 In hindsight however, these borders, drawn by the victorious British and French soldier politicians under the 1921 Sykes Picot agreement divided the Ottoman Empire and forged the map of the Middle East without regard to religion, ethnicity, tribe, family and clan or even geography.

All this proved illusory from the start. New states were created by Britain and France to reward wartime allies, to protect key imperial routes and to assure access to oil. But these new states rarely aligned with the tribal, religious or other realities of the region. The so-called “nation states”, like Iraq, Saudi Arabia, Jordan, Syria, Lebanon and others, have established coherent political spaces. Others were only held together by force.

The “Arab Spring” became a catalyst for those rapid new changes. Dictators were toppled, leaving a vacuum and lacunas of power. Islamists of every stripe rushed into the vacuum. Thus the Middle East in the 21st Century is no longer a group of nation-states. The new map of the Middle East is based on ethnic groups – Sunnis, Shiites, Kurds, Alawites, Druze and Jews along with various minorities such as Christians and Yazidis.

They come from “time immemorial” says Israeli Professor Uzi Rabi, Director of the esteemed Moshe Dayan Centre for Middle Eastern. “The aftermath of the “Arab Spring”, saw a kind of combustible situation emerge that allowed rival ethnicities, tribes and religions begin to fight for their rights with dictators now absent from the scene”.

And that soon exploded in total turmoil. Syria, of course, lit the match. The old Syria is already breaking at least into three different pieces. And that effect has rippled across borders, challenging traditional boundaries established a century ago. As in Iraq, which is already tearing itself apart into Kurdish north, Shia south and Sunni west, the latter now fully under control of the Islamic State of Iraq and Syria (ISIS), busily reviving the Islamic Caliphate.

“A New Beginning” – June 4, 2009 – U.S. President Barack Obama gives a speech in Cairo, Egypt, outlining his personal commitment to engagement with the Muslim world, based upon mutual interests and mutual respect, and discusses how the United States and Muslim communities around the world can bridge some of the differences that have divided them. – Video source: the White House

Of all events happening since the outbreak of the “Arab Spring” ISIS is perhaps the most dramatic. What makes it so, is the speed and power play, with which they operate. Over the last year ISIS has captured vast territory in Iraq and Syria raising fear and unrest from Saudi Arabia, Yemen and Sinai to Egypt, Libya and Algeria.

ISIS is among the fastest-growing and richest terrorist groups of all time. After initially funding its efforts with extortion, smuggling and private donations, it literally struck gold last June, when it seized millions of funds from the Mosul central bank. ISIS is already earning huge sums from captured oil fields, selling the resources on the black market.

In fact, the Islamic State has recently introduced its own currency – coins made of gold, silver and copper that avoid dependence on the international monetary system. Its weapons arsenal has grown from simple guns to sophisticated war fighting systems taken from the US hardware supplied to the Iraqi army. ISIS achievements are not only remarkable feats of arms, but highly challenging to all non Muslims and even Muslims not fully acceptable to ISIS extremist religious doctrine.

Over the last year ISIS has captured vast territory in Iraq and Syria raising fear and unrest from Saudi Arabia, Yemen and Sinai to Egypt, Libya and Algeria

According to Rabi, there is a lot more going on related to ISIS than the beheadings of westerners that have dominated world headlines: “The terror causes people not to stand up and fight ISIS. They caused Iraqi Forces to withdraw because of the horror and fear, leaving their American donated weapons freely to ISIS. They are not just lunatics. They already run a state.

With brutal efficiency, the Sunni extremist group has carved out a large chunk of territory that has effectively erased the border between Iraq and Syria and laid the foundations of its Islamic state. They already have almost ten million people under their control. They tax people, maintain a doctrinal educational system, and possess sovereignty. They strive for an Islamic Caliphate. Their inspiration is the revival of the Abbassids of the 10th and 8th century. They believe that they will be victorious.”

Ancient Religion is brought into the conflict. ISIS does not respect the right of the other to exist, if he is not member of their cult. Abu Bakr al-Baghdadi, as the leader of the new caliphate, or Islamic state, called on Muslims everywhere, not just those in area under the organization’s control, but all over the world, to swear loyalty to him. If not blocked in time, his new Caliphate might well be on the path to fulfilling its own Islamic “prophecies” and, at this point, will not allow anyone to get in its way. Few weeks later, on 13 of November 2014, ISIS officially announced that groups from Saudi Arabia, Yemen, Sinai, Algeria and Libya have joined the state, with smaller Islamic groups in Iran (Khurasan), Chechenia and the Caucasus, Indonesia, Philippines and Nigeria joining as followers of the new Caliphate.

At the heart of the Islamic State’s area, a huge sectarian war is being fought between Sunnis and Shiites, creating a storming gale of terror. It is becoming the key conflict in the Middle East – certainly not the Israeli-Arab conflict – which still persists making those mediocre headlines in backward Europe. In Iraq the violence is genocidal, it is an all out fight over the dominance of the Islamic religion. Ethnic and religious divisions are how one must view the Middle East in the 21st century, not states. War and armed conflict between the sectors is consuming broad swaths of the region. With hundreds of thousands killed, there are already 14 million hope- and helpless displaced people filling unsuitable camps in Lebanon, Jordan and Turkey.

Looking back into recent history, it turns out that America’s biggest error following the 9/11 disaster was to topple Saddam Hussein. He may have been a bloodthirsty tyrant, but also the ardent stabilizer of the secular Middle East – holding Iranian and extremist Islamic threat to this explosive region in check. No doubt the “Arab Spring” would have eventually happen, as the political scene was ripening for it in the authoritarian ruled post colonial region, but the Islamic extremists would not have gained too much power with Saddam’s iron rule in Iraq still intact.

The dramatic arrival of Da’ish (ISIS) on the stage of Iraq has shocked many in the West. Many have been perplexed – and horrified – by its violence and its evident magnetism for Sunni youth. But more than this, they find Saudi Arabia’s ambivalence in the face of this manifestation both troubling and inexplicable, wondering, “Don’t the Saudis understand that ISIS threatens them, too?”

It appears even now, that Saudi Arabia’s ruling elite is divided. Some applaud that ISIS is fighting Iranian Shiite “fire” with Sunni “fire”; that a new Sunni state is taking shape at the very heart of what they regard as a historical Sunni patrimony; and they are drawn by Da’ish’ strict Salafist ideology. But more devout Saudis are deeply disturbed by the radical doctrines of Da’ish (ISIS) – and are beginning to question some aspects of Saudi Arabia’s direction and discourse. Saudi Arabia’s internal discord and tensions over ISIS can only be understood by grasping the inherent (and persisting) duality that lies at the core of the Kingdom’s doctrinal makeup and its historical origins.

It was based on Abd al-Wahhab’s Jacobin-like hatred for the religious decay that he perceived all about him – hence his call to purge Islam of all its heresies and idolatries. ISIS’s project therefore, is to them nothing more than reviving the Wahhabism of the founding generation and this worries the royal House of Sa’ud because, this time, reforming the Wahhabi project comes from outside the Saudi state and undercuts its legitimacy.

The royal House of Sa’ud noted that a Wahhabi resurgence was launched from outside the border this time, representing the biggest and most dangerous threat faced by the Saudi regime since its inception.

The Saudis fought the religious regimes that emerged after the Arab Spring. They allocated a huge budget to overthrow the Muslim Brotherhood rule in Egypt in order to prevent the emergence of a model of Islamic rule that competes with and undermines the legitimacy of the Saudi regime.

As it currently enfolds, ISIS strategy seems to base on partial conquests, by creating internal unrest in target nations to instill growing influence, with ultimately achieving full domination. For the foreseen time, it seems that they will continue to avoid direct confrontation with strong adversaries, like Iran, Turkey and even the difficult mountain region of Kurdistan and try to gain access to those territories by influence of their Islamic doctrine, acts of terrorism and destabilizing order by subversion.

Using such strategy they will bid time to consolidate their gains, gather military and economic power and experience, relying on those Western educated Muslim youngsters that join their ranks. Some of these certainly received military and technological skill in the host nations, which they abandoned for ISIS. With all this building up into a highly effective military and economic power base, the Islamic State might become an increasingly dominant element in Mid Eastern politics. Using terror and insurgency in Europe and later the US, they might achieve their global aspirations of the Islamic Caliphate by challenging, what they regard as western decadence with Shariya law.

What could stop them seems to be not American “boots on the ground” but active intervention from local and determined, concerted action by moderate Sunni nations. The Kurds are already spearheading this effort, supported by US weapons and supporting airpower. Unfortunately, both seem at the moment insufficient to become game changes in the mortal combat against the determined ISIS fighters.

Much will depend on the attitude of Ankara, Riyadh and foremost the part which Tehran will play, as the Kurds enfold their fighting capabilities against ISIS with more modern weapons. Most and foremost, the fate of the new Middle East now enfolding will depend on a radical change of mind in the White House to enter its global responsibilities into the Middle East turmoil before it will be too late.

Our next article will assess the Kurdish fighting potential and its success or failure to save the Middle East from becoming a highly dangerous and ruthless Islamic Caliphate.