The Russian Navy successfully test-fired a Bulava intercontinental ballistic missile for a second time in two months, proving the new Russian submarine launched ballistic missile (SLBM) has improved its reliability and is now ready for deployment. The test was performed at night, on Friday November 28, 2014 was the third successful flight in a series of five developmental testing designed to verify the missile’s reliability after it suffered a series of failures in earlier flights. The Russians plan to launch two additional Bulava missiles next year as part of their routine operational readiness testing plan.

Another imminent test expected in the upcoming days is the last test launch of the solid propellant inter-continental ballistic missile RS-26 (also known as Avangard and Rubezh). On this test the missile will be launched from a mobile surface vehicle. There are no plans for its silo deployment.

RS-26 is designed as a derivative of the operational RS-24 Yars missile. The next test, announced to be the ‘last in the test series’ has been scheduled for December, Russian news agency Tass reports. According to the current plans the new missile is to enter duty in 2015. RS-26 offers improved combat capabilities over previous Russian ICBMs. It also carries multiple warheads, and is lighter than its predecessor RS-24 Yars.

The Defense Ministry said the Alexander Nevsky nuclear submarine test-fired a Bulava missile from an submerged position in the Barents Sea. The missile’s warheads reached designated targets at the Kura testing range in Russia’s far eastern Kamchatka Peninsula. On this test the submarine was loaded with a single Bulava missile. In October the lead submarine of this class, Yuri Dolgoruky carried out a similar test launch with a full load of Bulava missiles on board. Yuri Dolgoruky was the lead ship of the Borei class – the 4th generation ballistic missile submarine of the Russian Navy.

Bulava’s recent series of successful test flights seems to indicate that the missile’s problems have been solved.

The Russian Navy now has two operational Borei-class nuclear submarines armed with the Bulava SLBM. Alexander Nevsky is this is the first serial ship of Project 955 “Borey” after the commissioning of lead ship Yuri Dolgoruky. It was built by the Sevmash shipyard in Severodvinsk and commissioned into service on December 23, 2013. The third one – Vladimir Monomakh, has been completed and is waiting to be formally commissioned by the Navy. Two additional submarines of this class are currently under construction. Overall, eight Borei-class submarines are set to be built.

With Soviet-built nuclear submarines approaching the end of their lifetime, the Kremlin has made replacing them a top priority in the arms modernization program. The Bulava has a range of more than 8,000 kilometers (nearly 5,000 miles) and is capable of carrying up to 10 independently targeted nuclear warheads.

Bulava testing has encountered several failures in the past. In September 2013, during trials of the Aleksander Nevsky nuclear submarine a Bulava rocket engine malfunctioned two minutes after launch. Following this incident, Russian Defense Minister Sergei Shoigu ordered five additional launches of Bulava missiles. All recent missions were successful. Two additional missions are set for 2015. Despite the test failures, the Russian military insisted there was no alternative to the Bulava as the main armament for Russia’s new Borey-class strategic missile submarines that are expected to become the backbone of the Russian Navy’s strategic nuclear deterrent force. 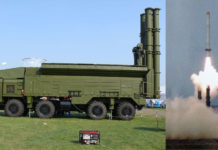