The Suspected person wearing traditional ‘niqabi’ vail has Killed an American Teacher and later targeted an American doctor with an improvised bomb. Analysts consider the brutal attack could be part of a ‘lone wolf’ campaign inspired by extremist Islamic terrorists, directed against countries participating in the coalition the Islamic State.

Security and police forces in Abu Dhabi arrested a woman suspected to be the the “Niqabi killer”, who brutally murdered an American teacher earlier two days before the arrest. According to Lt. General HH Sheikh Saif bin Zayed Al Nahyan, Deputy Prime Minister and Minister of Interior, the suspect was identified in less than 24 hours, and arrested in less than 48 hours.

According to police authorities, the day after the first murder the suspect also attempted to kill an Egyptian American doctor women at another location, using an improvised explosive device. The police forces were able to dismantle the bomb before it was detonated.

“The two consecutive incidents involving the murder and the bomb led us to believe there was one suspect for both crimes due to the matching descriptions.” Colonel Dr. Rashid Borshid, Head of the Criminal Investigation Department (CID) at Abu Dhabi Police said.

Authorities believe the suspect targeted her victims based on nationality alone, and had nothing to do with personal issues. This may hint on the crime being a ‘lone wolf’ terror attack similar to attacks in the US, Canada, Australia and Europe, inspired by ISIS or Al Qaeda.

Sofar most of the Gulf’s emirates, including Abu Dhabi were spared from attacks by Islamic extremists, partly due to the generous contribution the emirates are providing Islamic aid organizations. Yet the increasing weight of the Islamic State (ISIS), particularly druve toward economic self sufficiency could indicate possible change of wind in the Emirate’s protected status.

The Security Media Department displayed a video explaining the details of the crime which included images taken from CCTV. The video also highlighted the search and inspection procedures conducted by the police and security forces, which eventually led to the arrest of the suspect solving the mystery behind the crime.

A niqab is a cloth and veil which covers the face of the women as a part of sartorial hijab. It is worn by some Muslim women in public areas and in front of non-mahram adult males. While being a fundamental cultural and religious symbol for certain Moslems, Niqab is also a major security concern in Moslem countries and abroad, as it prevents the identification, identity or gender of person wearing it. Niqab or similar Burka are worn by women in the Arabian Peninsula such as Saudi Arabia, Yemen, Oman, and the UAE. 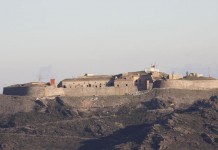