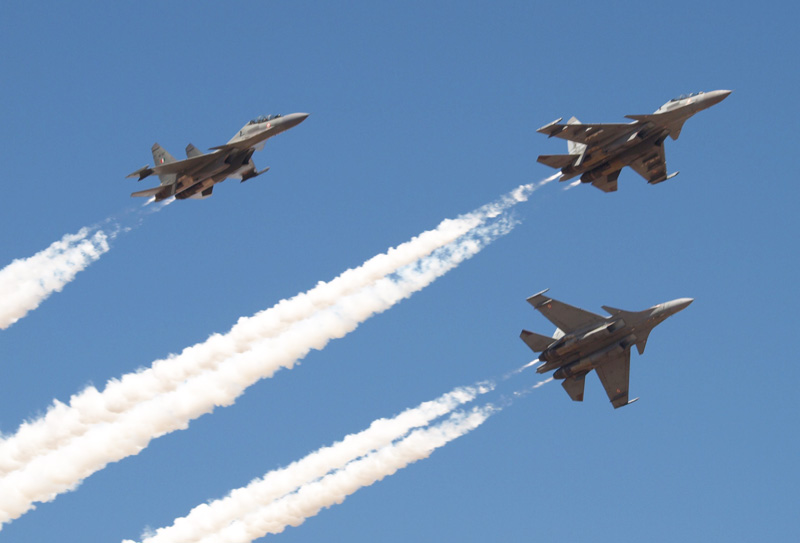 For the first time since January 31, 2012, when the French Rafale fighter was chosen as the future medium multi-role combat aircraft (MMRCA) for the Indian Air Force (IAF), it has been officially admitted that there are serious problems in negotiating the purchase with the French vendor, Dassault. the Indian Business Standard reports.

Speaking to the media on Tuesday evening, Defence Minister Manohar Parrikar said there were “complications” in the negotiations, already on for almost three years, with the French side reluctant to meet commitments that IAF had specified in the tender. Parrikar mentioned that local production of Su-30 MKI by HAL would be adequate for the Indian Air Force (IAF) in case India will not procure the Rafale.

Past reports cited the reluctance of the French side to assume responsibility for the local production of 108 Rafales by Hindustan Aeronautics Ltd (HAL), mandated by the tender. Unnamed sources told the Times of India the Indian MoD is also upset with Dassault’s attempts to “change the price line”, which led to its selection over the Eurofighter Typhoon as the L-1 (lowest bidder) three years ago, by deciding the “costing” for HAL on its own. “It will amount to a de facto hike in the L-1 price”.

The IAF currently plans to have 272 Su-30MKI fighters by about 2018. HAL’s Nashik production line is building the fighter at $56 million each (358 crore Inr.), less than half the estimated cost of the Rafale.

In another reversal of previous ruling, Parrikar reiterated his intention to permit foreign arms companies to station “representatives or technical consultants” in India. India imposed a ban on ‘agents’ that after the Bofors gun scandal of 1987-88.

“Changes will be made to the Defence Procurement Policy. Company representatives will be allowed but commission, or percentage of profit for the deals will not be allowed.” Parrikar said, adding that representatives have to be registered with the ministry and remuneration shall be declared by the company.

According to The Tribune, a draft of the changed policy is ready and the final draft will be ready in the next few days and the process will be completed in 45 days. “The interests of the military would be taken care off” Parrikar declared.

Parrikar also indicated that may opt to lift lift the ban on blacklisted firms if the equipment they supply is crucial to the armed forces. The Minister made it clear that “success fees will not be allowed”. The Minister gave an example that Bharat Earth Movers Ltd (BEML) has been allowed to deal with the original Tatra company but not Tatra UK, which was banned following allegations of kick-backs.