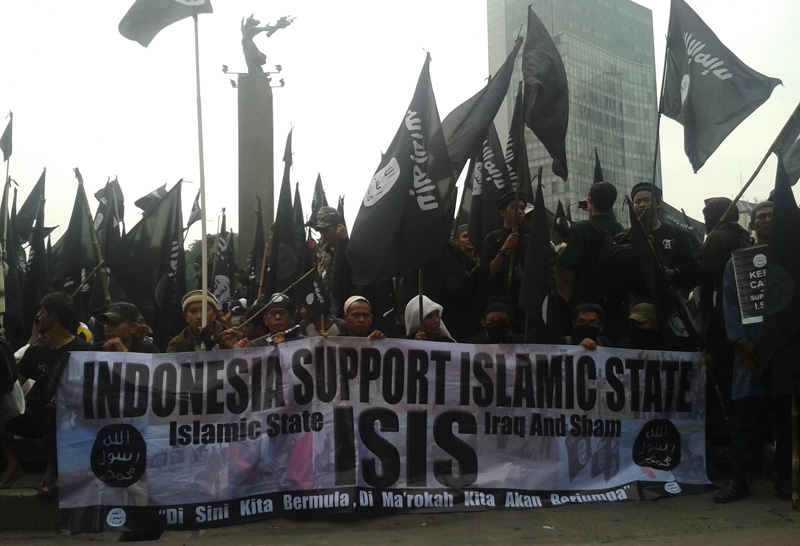 As the Islamic State continues its armed campaign in Iraq and Syria, its ideology is drawing fans and fighters from as far as Southern Asia and China. Importantly, four new terrorist organizations are already aiming to establish an Islamic Caliphate in the Far East region called Daulah Islamiyah Nusantara that is to comprise Malaysia, Indonesia, Singapore, southern Thailand and southern Philippines.

In these countries, Muslim cells have emerged and are embarking on an aggressive recruitment drive to join the Islamic State (IS). Its desire to form an Islamic Caliphate in the Far East will become more and more feasible, as extremist Islamic elements grow in strength, deeply encouraged by the dramatic fighting in Iraq and Syria and the European Muslims already joining the Jihad in greater numbers.

The latest development in the creation of the revived Islamic Caliphate comes out of China. Although the Beijing government and keeps strict security measures on all information, recent photos are nevertheless circulating online in China of what is suspected to be Chinese citizens fighting for the Islamic State militant group (ISIS). Though the photos initially surfaced some time ago, there still has been no official confirmation on the identity or nationality of the suspects.

However, Iraqi military sources claim to have caught a Chinese citizen fighting for the Islamic State militant group. China’s Muslim population is known predominantly in the western regions of the country, which is often marginalized by the officially atheist Chinese government. Yin Gang, a West Asian and African Studies scholar at the Chinese Academy of Social Sciences, reported in a western news media that hundreds of Chinese nationals are currently fighting for the Islamic State, citing previous examples of Chinese citizens joining al-Qaeda in Afghanistan.

ISIS’s growing influence across Southeast Asia indicates trouble for the region. Malaysia will remain under threat, and IS-inspired fighters will worsen the low-intensity conflicts in Indonesia and the Philippines. By default, this puts ever-vigilant Singapore at risk, which is always in the crosshairs of Islamist jihadists. IS might also inspire Thailand’s otherwise local Islamist-Pattani nationalist insurgency that has increased violence in the face of failing negotiations with the government. According to the rebel manual, ‘Fight for the Liberation of Pattani’, they want a local caliphate, too. Burma’s small Muslim vs. Buddhist conflict has already spilled over into Indonesia and Malaysia with a few bombings and assassinations. Therefore, it is candidate for IS provocation as well.

On July 22, the IS media company Al-Hayat released a video in which a group of eight jihadist fighters from Indonesia were shown to have arrived in Iraq and were part of the Islamic State. In the video, Abu Muhammad Al-Indonesi, one of the fighters, delivered a message urging Indonesians to join the Islamic State and swear fealty to Al-Baghdadi.

In May 2014, a group of jihadists from the Philippines declared support for the ISIS. In August, it released a video in which the jihadists, who belonged to Jama’at Ansar Al-Khilafa (JAK), formally swore fealty to Abu Bakr Al-Baghdadi. The video, in which the faces of the jihadists were blurred, was produced by the jihadi media outlet Al-Battar.

In August 2014, it emerged that scores of Filipino jihadists have joined the Islamic State in Iraq. Fidel Ramos, the former president of the Philippines, told a newspaper: “At least a hundred of our young Filipino-Muslims have infiltrated Iraq where they get training and they can launch jihad when they come back to the Philippines.”

Malaysian authorities recently stopped a major ISIS-influenced attack, and Indonesian and Philippine officials are scrambling to prevent their own growing flocks of Islamic inspired terrorists from going on the rampage. The Philippines’ Foreign Ministry says that 200 of its citizens have gone to war under ISIS’s flag in the Middle East. Most of these are orphans of dead fighters from domestic Islamist insurgent groups such as the Abu Sayyaf Group (ASG) and Moro National Liberation Front.

The plan for a regional Islamic caliphate – Daulah Islamiah Nusantara – was also confirmed in August by Ayob Khan Mydin Pitchay, the Malaysian counter-terrorism official whose investigations led to the arrest of the 19 jihadists in Malaysia. Ayob Khan confirmed that the militants “had visions of establishing a hardline Southeast Asian caliphate spanning Malaysia, Indonesia, Thailand, the Philippines and Singapore, and planned to travel to Syria” to learn from the Islamic State.

ISIS is currently the greatest actual security threat China faces in the world. Chinese Muslim Uighur separatists who have been have been joining ISIS in Iraq and Syria. Eventually (if not already) these battle-hardened Uighur separatists will begin to make their way back into China and begin a campaign of terrorism on a scale previously unimaginable in China.

The Muslim Uighurs are part of the population of the Xinjiang region in Western China. Many Uighurs have joined ISIS in Iraq and Syria, where they are trained in terrorism and combat. These terrorists are building a valuable network of different Muslim extremist groups who can supply them with weapons, as well as logistical and ideological support.

So far the effectiveness of Uighur attacks in China have been limited because the separatist groups are largely unorganized and fractured. But as ISIS-trained Uighur extremists begin to trickle back into China, the Chinese government will find itself battling an entirely different.

Once this happens, the world can expect to see a China that is much more willing to involve itself in military intervention creating a historic precedent for China in international disputes. This willingness to use force will have profound implications on China’s ongoing territorial disputes with surrounding Asian nations, in which Pyongyang has already been flexing its military might in this context. Should the influence of ISIS escalate into an organized terror threat inside China, one can expect a new military superpower, as China expands its military capabilities.