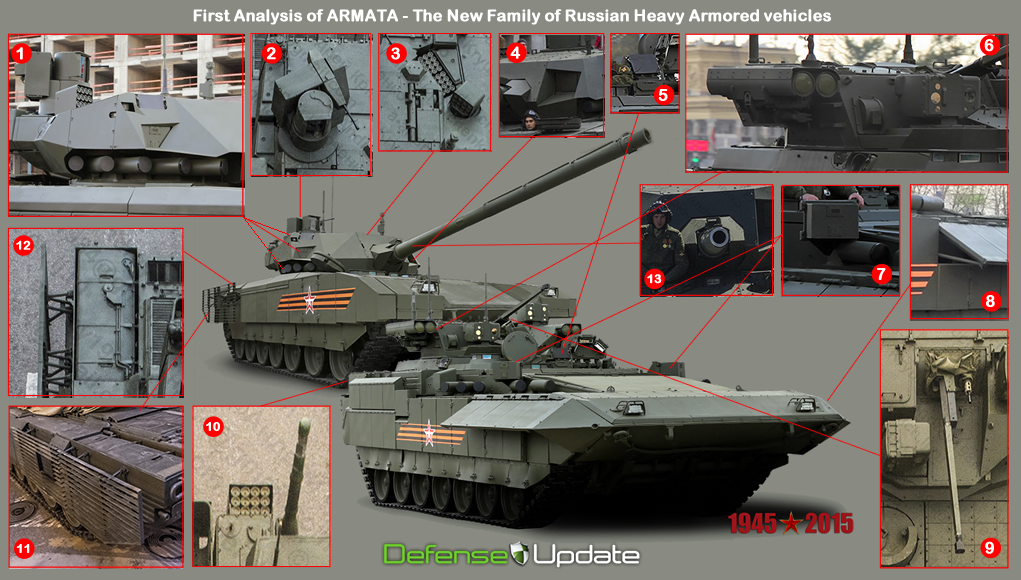 The Russian Ministry of Defense today publicly presented the first members of the Armata family of heavy armored fighting vehicles (AFV) – the T-14 Main Battle Tank (MBT) and T-15 armored infantry fighting vehicle (AIFV). The two vehicles are designated to become the spearhead of the armored formations of the Russian Army – replacing the T-72, BMP-2 and MT-LB-based platforms. In Armata-centered formations, these two combat vehicles will be augmented by additional variants that have not yet been unveiled, which could include a combat engineer and counter-mine vehicle (BREM), support platforms mounting automatic cannons, missiles (Terminator) and thermobaric rockets (TOS), self-propelled guns (Coalitzia), bridge layers (MTU), and armored recovery vehicles (ARV).

The 24 Armata platforms shown on the May 9th parade in Moscow are likely to be part of the early production series, some were especially prepared for the parade, according to a Russian MOD tender published in November 2014. Nevertheless, these models represent an innovative ‘clean sheet’ design of an armored vehicle. Although the two vehicles presented have different configurations they also have much in common, as their designers have used common subsystems to simplify training, improve field support and reduce life-cycle cost. These common elements include the suspension system, tracks, drivetrain, and some of the armor and active protection systems. Both vehicles use seven torsion bars with shock absorbers for the rubber-protected road wheels.

The optronics, however, are tailored specifically for each weapon system, and therefore differ considerably in each application. Seating arrangements are also similar, with two crew members seated side-by-side and a third in tandem with the driver in the T-14, and with the commander, in the T-15. According to some sources there are ‘dozens of cameras’ on the tank, providing full situational awareness around the tank and beyond, in day, night and under adverse weather conditions.

Due to the wide interest in the new Russian armored vehicles we are opening our analysis to all readers. This kind of analysis is regularly provided to subscribers on regular basis. You are invited to join our Gold membership today.

The armor suite used on the T-14 also seems to share some common elements with the T-15. Many of the passive armor modules are similar, if not identical, in some locations. Same concepts are also employed – steel, hybrid and reactive armor, mine countermeasures in front, bar armor protecting the engine compartment and dual active protection system. Both vehicles employ remotely-operated weapon turrets, separating the crew from the armament and ammunition. Both vehicles are operated by a crew of three. The T-15 can also accommodate an infantry squad in the passenger compartment. However, unlike the BMP-2, these soldiers do not have periscopes, firing ports or individual access hatches. Therefore, the infantry squad would come into effect only after dismounting.

The current turret mounts a 125mm smooth bore cannon, without a coaxial weapon (previous reports indicated it had a 30mm coaxial gun and 7.62mm machine gun). While the turret has a distinctive shape dictated by the panels covering its various systems, its basic structure is likely to be thinner, providing a framework for a modular weapon system that could also support cannons of various calibers, automatic mortars or other support weapons.

The shrouded 125mm 2A82-1M cannon is different from previous models used on the T-90 and T-72. The main difference is the absence of a bore evacuator (since the gun compartment is separate from the crew compartment, extracting the combustion gasses from the gun is not necessary for crew safety.) A small box likely to be a gun reference system is located above the gun, providing exact measurement of barrel deformations for ballistic calculation (13). A meteorological mast is also located on the turret of the T-14, or the rear section on T-15 (10), feeding data to the ballistic computer. The cannon fires standard ammunition as well as gun-launched missiles, with a range of eight kilometers.

The T-15 uses an ‘off the shelf’ KBP EPOCH turret, also used on the Kurganets-25 BMP. This turret integrates a single 30mm cannon with 500 rounds (AP/HE), a 7.62mm coaxial machine gun, four Kornet-EM missiles (two on each side), and two fire control systems, integrating electro-optical sights, a laser rangefinder and laser guidance system (for the Kornets). The two systems are contained in ballistic protected modules, adding resilience to this combat vehicle. (6, 9)

A 7.62mm machine gun is mounted on the remotely-operated weapon station, integrated with what seems to be the independent, panoramic sight of the commander. (2) The gunner’s main sight (4) is located in a protected cell to the right of the main gun, enabling the gunner and commander to engage different targets.

(1, 7) The T-14 turret also houses two active protection systems, comprising the Afghanit hard-kill APS (five launch tubes recessed at the turret base), and four soft-kill countermeasure launchers – two are positioned on rotating pedestals and two are pointing upwards (3, 10). These are likely to launch salvos of projectiles instantly creating a thick, multi-spectral smoke screens designed to defeat guided missiles, laser and targeting systems by blocking infrared, visible light and millimeter-wave radar radiation. These soft-kill countermeasures are designed to protect the vehicle from 3rd and 4th generation missiles such as direct attack Hellfire, TOW and BILL, or Brimstone, JAGM, Javelin or Spike missiles, approaching at high trajectory, as well as from nearly vertical top-attack by sensor-fused weapons (SFW).

A total of 10 Afghanit canisters are used, five on each side of the turret. When the turret points forward, they protect the forward arc (about 60 degrees on each side). When a threat coming from the sides or rear is detected, the turret will automatically slew toward the threat, enabling the APS to launch. Lacking this turntable function, T-15 uses the same five tubes in fixed positions, on both sides of the vehicle, covering only the forward arc. The tube objects are seemingly a smaller, more efficient evolution of the Drozd ‘explosive screen’. Afghanit is likely employing these countermeasures at close range, neutralizing incoming threats before they hit the tank armor. A previous version of APS from Russia, the Arena, employed an explosive ‘cassette’ launched above the incoming threat, firing a screen of blast and fragments downward.

Each of the APSs has its own sensors as well, mounted on each side of the turret, covering the rear and front quadrants left and right. The sensor (5) coupled with the pedestalled and upward pointing fixed countermeasures seems to be covered by a flat panel. Several sources indicated the Armata (T14 and T15) have the capability to detect, and simultaneously track and locate 40 land targets and 25 air targets. If this is indeed that sensor, it is likely to be AESA radar panels. There is no indication of such radar on the vehicle except those flat objects mounted on both sides of the turret. There are four such sensors on each vehicle (T-14, T-15), providing hemispheric coverage, thus detecting potential top attack threats before they enter a lethal zone (SFW).

Although the two designs share the same suspension and drive train, the layout of those systems is different. Both have seven road wheels, four suspension idlers and steel tracks. The T-14 has the turbo-charged diesel engine is mounted in the rear section, with a rear sprocket and front tension wheel. This design places the main weapon system in the center and the crew in the front for best visibility. The T-15 has its engine in the front, with the sprocket pulling its tracks also placed in the front and a tension wheel at the rear. This design clears space for the infantry squad at the rear and also adds some protection up front.

The engine develops 1,500 hp (moderated to 1,200 hp for optimal range). Serving the engine air intakes, cooling and exhaust require special armor adaptations. The T-14 uses a slat armor (11) to protect these elements and the engine compartment from RPGs, leaving the necessary space for air intake and exhaust. The T-15 uses a skirt (8) of oblique armor panels covering the exhaust from above, but these leave enough space to direct the exhaust gases away from the vehicle. The external fuel tanks (12) positioned on the engine’s sides also add protection. Unlike the jettisonable barrels used on the previous Russian tanks, these external tanks are fixed, and, therefore, are likely to be consumed first to reduce vulnerability in combat.