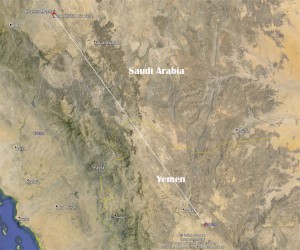 In a potential escalation of the months long war, Iranian backed Yemeni Houthi rebels fired a Scud ballistic missile at Royal Saudi Arabian Air Force (RSAF) King Khalid Airbase west of Khamis Mushait, one of the kingdom’s largest military bases. The attack was launched from an area near the Yemeni town of Saada, about 180 km (111 miles) south of the targeted Saudi airbase.

This is the first missile intercept of a SCUD by a Patriot missile since the 1991 Gulf war. In the recent intercept which took place at dawn on Saturday June 6, 2015 two Patriot missiles were launched scoring a successful target kill. In 1991 four Patriots were fired against each SCUD, achieving marginal results. The performance of the Patriot in 1991 was controversial, due to conflicting US, Saudi and Israeli assessments studying the missiles’ performance in each theater. During the 2003 Gulf War the Patriot was used against Iraqi Ababil 100 and Al-Samoud 2 short range ballistic missiles, but no SCUDs were fired.

Saudi Arabia has been leading a regional coalition fighting against the Shiite Houthi rebels that have overthrown the Sunni government in Sanna two months ago.

Yemen’s ballistic missiles were the major targets for the Saudi attack. Yemen had a stock of some 300 Scuds, the majority of those missiles were destroyed by the coalition attack. The recent attack indicates not all Scuds have been destroyed and the Houthis still have the military power to threaten cities along the Saudi southern border with Yemen.

The coalition responded to Saturday’s attack by targeting and damaging the Scud launcher, which was located south of the Houthi stronghold city of Saada, according to SPA.