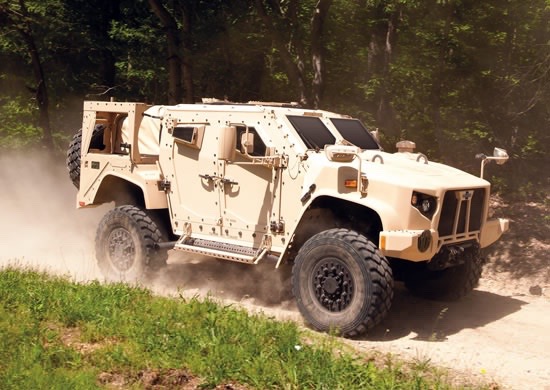 Oshkosh, Wisconsin Based Oshkosh Defense company was awarded yesterday $114 million firm-fixed-price contract for two-year low-rate initial production of Joint Light Tactical Vehicle (JLTV) for the U.S. army and U.S. Marine Corps. The company is likely to win follow-on orders under options of that contract, worth over $6.7 billion, under the  and full-rate production phase expected to open in 2018 and carry the program through 2024, producing 17,000 vehicles. The full scope of the program will span over 25 years, producing 55,000 vehicles, worth well over $22 billion.

Oshkosh grabbed the contract after a long competition with Lockheed Martin and AM General, the manufacturer of the current HMMWV tactical vehicle. Unlike its competitors that received government funding for their prototype development, Oshkosh entered the race at the Engineering Manufacturing and Development (EMD) with a vehicle based on its Light Armored Tactical Vehicle, based on the combat proven and matured MIne Resistant Ambush Protected All Terrain Vehicle (M-ATV), over 9,000 of these vehicles are currently operational with the Army.

Oshkosh JLTV is 30 percent lighter than the M-ATV, while offering similar level of protection. Other key improvements the JLTV has over HMMWV and M-ATV, are significant improvement in power to weight ratio, better power availability and payload reserve, and integral electronic architecture, while offering superior protection, at a level similar to the current M-ATV, also produced by Oshkosh.

When JLTV becomes operational in 2018 it will improve the mobility, survivability and energy efficiency of Army and Marine Corps vehicles, allowing combat forces to operate more effectively in modern battle. It will also be able to be air lifted by current CH-47 and CH-53, something the current, heavy protected vehicles could not do.