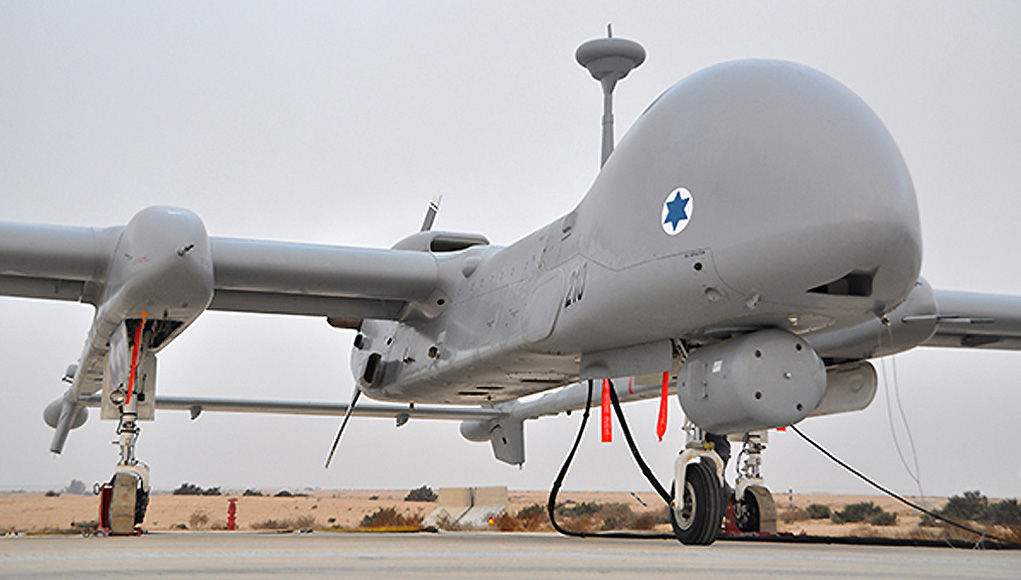 These new drones will be operated by the Indian Air Force (IAF), which already has a large fleet of Searcher and Heron I reconnaissance drones. Both are produced by Israel Aircraft Industries (IAI). The IAF also has a fleet of Harpy UAVs from Israel – designed as loitering radar-supression weapons. In addition,India operates the HAROP, a spin-off variant of the loitering weapon, designed to attack other surface targets. (Both Harpy and Harop are also made by IAI).

The proposed sale of the Heron TP to India had been on the table since 2012, but, only after the election of the new Modi government, did it receive the necessary political backing.

The IAF has been seeking an unmanned, precision attack capability as a matter of high priority. But the transfer of such systems from foreign suppliers has been blocked by article II of the Missile Technology Control Regime (MTCR), which limits the transfer of unmanned means of delivery capable of carrying payloads of 300 kg. or more across distances exceeding 500 km.

The Indian Defense Research and Development Organization (DRDO) has been working on the development of an indigenous, armed reconnaissance drone for several years, but its Rostum II has been delayed and isn’t expected to reach operational status in the foreseeable future.

In a recent clarification of MTCR Article II, some drones were excluded from the list of forbidden systems, partly due to the fact that they cannot carry a single payload of this size. This clarification paved the way for the the export of Israeli Heron TP and US Predator B (Reaper) drones to foreign customers, as well as some Chinese drones capable of similar performance. Such drones can be operated on armed reconnaissance missions with a full sensor suite, enabling operations in day, night and adverse weather conditions.

Heron TP has been operational with the Israel Air Force since 2012, but has not been exported so far. It can carry a payload of 1,000 kg., both internally and on under-wing hardpoints. Its payload options include the new M19HD long-range electro-optical payload, enabling surveillance and target acquisition at stand-off range and high altitude. The Heron TP can also carry a ground- surveillance radar to provide similar capabilities under all weather conditions, enabling the drone to locate and strike targets even through dense clouds.

IAI also offers an extended-range version of Heron I, already operational with the Indian Air Force, Army and Navy. This ‘Super Heron’ is also configured to carry external payloads, although less than the larger TP.

The Indian Military has suffered repeated cross-border attacks in the Himalayan mountainous region in Northern India, where the Army and Air Force lack deterrence or retaliation capabilities. One recent attack in Manipur in June 2015 took the lives of 18 Indian soldiers. The Indian Military considers armed drones to be an appropriate means of deterring such attacks. Pakistan has recently fielded its own weaponized unmanned aerial vehicle called Burraq, which recently have been deployed on its first combat mission against Taliban forces in Northern Pakistan. China is also using a weaponized version of its Wing Loong UAVs, equivalent to the U.S. MQ-1 Predator class.

IAI has pitched Heron TP to a number of international customers, the most recent being the Royal Australian Air Force, currently operating Heron I drones. Australia is considering to upgrade its unmanned systems capability, with the deployment of Medium Altitude-Long Endurance MALE) type system, and is currently considering the Israeli Heron TP and US Predator B as two possible alternatives. Germany and Poland are also considering the Heron TP as a future MALE system.