Updated | Designated Coastal & Island Defense System (CIDS), the new system provides authorities with the tools to enforce national sovereignty over coastal areas, islands and archipelagos, protecting interests throughout a national Economic Exclusion Zone that can extend up to 200 miles from the seashore. A version of the system has already been activated in Vietnam, where it is deployed as part of the country’s ‘Killer’ anti-landing system. The Vietnamese application integrated by IMI uses coastal defense systems provided by IAI’s Elta Systems, Orbiter 2 mini-UAVs supplied by Aeronautics, and extra rockets provided by IMI. 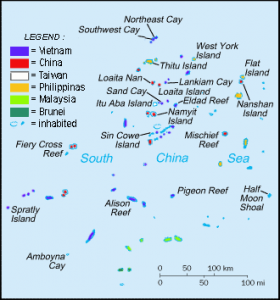 While cruise missiles and artillery have been used for coastal defense for many years, until now, ballistic missiles and rockets have lacked the range and precision necessary to deter naval vessels. With its high precision, CIDS can hit targets at sea at long range, while they are still hours of sailing distance from shore. The system’s radars and optional UAVs provide the early

warning, location, speed and heading data necessary to identify and lock onto targets in order to exploit its extended range and precision. The introduction of GPS guidance transforms the system’s rockets into precision, guided weapons, with accuracy of better than 10 meters. Moreover, with their ballistic attack trajectory, these weapons are difficult to defeat by conventional naval defenses.

Two weapons of this class include the Chinese DF-21D and the Iranian Khalij Fars, derived from the Fateh 110 short-range ballistic missile. Both use vehicular-launched ballistic missiles. The system introduced by IMI Systems offers a similar application in an operationally flexible, distributed and affordable configuration.

A rocket-based island defense system such as the Vietnamese ‘Killer’ system is particularly suited to protect the country’s territorial claims in the disputed Spratly Islands of the South China Sea. Its coverage, which extends over 80 nautical miles, is sufficient to enable a small garrison to protect approaches to key islands and many of the atolls and small islands in the area.

Updated: August 11, 2016: In the summer of 2016 Vietnam has discreetly fortified five of the islands in the disputed South China Sea with these mobile rocket launchers. Some of the sites are within striking range of China’s runways and military installations across the Spratlys, Reuters reported. According to these reports, only launchers have been deployed that could be made operational with rocket artillery rounds within two or three days. Deputy Defence Minister, Senior Lieutenant-General Nguyen Chi Vinh denied that Hanoi deployed such rockets to the islands but said Vietnam reserves the right to take such measures. Military analysts say it is the most significant defensive move Vietnam has made on its holdings in the South China Sea in decades.

IMI Systems offers the CIDS as an integrated coastal defense solution, integrating sensors and command, control and communications elements to create, update and process a situational picture over a wide area in real time. Configured for mobile, stationary or hybrid formations, CIDS supports flexible deployment in remote theaters. The system employs precision, guided ballistic rockets such as those of the ACCULAR family, that can hit pinpointed targets at sea and on land, at distances of up to 80 nautical miles.

The rockets used by the system enable coastal defenders to respond rapidly and decisively, engaging multiple moving targets simultaneously. CIDS offers a cost-effective alternative to coastal artillery and missile systems, offering superior performance in range and precision over coastal artillery. It also provides a higher degree of operational flexibility, through remote control and the ability to engage targets both at sea and on land.

CIDS elements can be distributed in multiple locations for optimal coverage and response. These elements can be controlled remotely from the system’s central command post. Redundant communications links ensure secure control over all distributed assets.