Designated the Lynx Wildcat by the UK MOD, the AW159 is the multi-role helicopter chosen by the British Army and Royal Navy to replace the Lynx helicopter and to meet maritime combatant and land utility and reconnaissance requirements. The helicopter has also been selected as the Naval-ASW platform to be operated by the Navy of the Republic of Korea. The AW159 can be configured to carry a number of submarine-prosecuting systems, including active dipping sonar (ADS), sonobuoys, and torpedoes. Besides ASW, the platform can also be configured for anti-surface warfare and armed with anti-ship missiles, rockets, and guns. 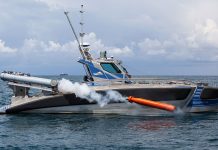 An Unmanned Seagull That Fires Torpedoes!