A US air strike on an Islamic State training compound in Libya probably averted a mass shooting or a similar attack in Tunisia, a Pentagon spokesman said Monday. The IS compound destroyed near the city of Sabratha on Friday was “very focused on training to conduct operations, the type of operations that we saw in Tunisia,” Pentagon spokesman Captain Jeff Davis said. “We are confident that what happened Friday with that strike prevented a larger tragedy with there being an external attack of some sort,” he added. “Both the type of training they were doing there and the proximity to the Tunisian border suggest that some larger plan was in the works.”

The training facility hosted as many as 60 jihadists at any one time who were being schooled in carrying out “the types of attacks you’ve seen in Tunisia,” Davis said, adding: “This was a site that we had watched very closely for many weeks and never at any time did we see any indication that there were civilians present or being held there”. 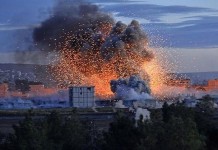