The Danish Prime minister and defense minister Denmark confirmed today the Danish government recommendation to buy 27 F-35A Lightning II aircraft for the F-16A/B Fighter Replacement Program (FRP). The three competitors have submitted bids for 24, 30 and 36 aircraft to the Danish ministry of defense Project Office. Denmark had originally sought bids for up to 48 aircraft to replace the Danish Air Force’s aging F-16s, acquired in the 1980s. The program is expected to cost $4.5 billion.

Although Denmark invested $291 million in becoming a partner in the JSF program, so far the aircraft was not selected for the Royal Danish Air Force.

Part of an ongoing process that began in 2005, the recent announcement reaffirms the Danish plan to buy the plane, following the downselection process through open competition. The next phase is an open debate in parliament, which should last approximately one month before Denmark officially approves its decision.

The Joint Strike Fighter was evaluated by the Danes, against the Boeing F/A-18E/F Super Hornet and Eurofighter Typhoon.

In order to provide the best possible basis for a political decision on the fighter aircraft type selection, the three candidates have been evaluated within four specific areas:

Strategic aspects: the ability of the candidates to support or fulfill overarching Danish defense and security policy objectives, including the potential for cooperation with other countries.

Military aspects: the ability of the candidates to successfully conduct fighter missions (mission effectiveness), the candidates’ survivability, opportunities for keeping the aircraft operational and technically relevant within its expected lifespan (future development) as well as the risks associated with each candidate that cannot be economically quantified (candidate risk).

Economic aspects: the estimated life cycle costs of the candidates, including costs associated with procurement, ongoing operations and sustainment as well as quantifiable risks.

Industrial aspects: the ability of the candidates to support significant Danish security interests through industrial cooperation with the Danish defense industry. The evaluations are based on an operational period of 30 years for the new fighter aircraft (2020-2049). Additionally, the evaluations have assumed a continuation of the current tasks and level of ambition of the Danish F-16 fighter capability to conduct national and international tasks within NATO collective defense tasks. 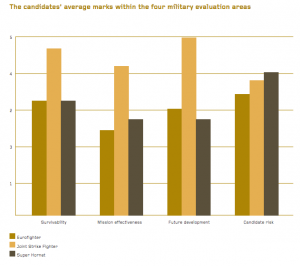 The Danish MOD detailed the evaluation process in a recently published report, in which the recommendation for the F35 was unanimous. Following are excerpts from the study:

Under survivability and mission effectiveness, the Joint Strike Fighter comes out better than the two other candidates. This is due to a number of circumstances, including for example the low radar signature of the aircraft as well as the application of advanced systems and sensors that enhance the pilot’s tactical overview and ensure the survival of the aircraft and efficient mission performance. In terms of survivability and mission effectiveness, the Super Hornet does slightly better than the Eurofighter.

Future development evaluates the extent to which the fighter aircraft is expected to constitute a relevant operational and technically applicable fighter aircraft capability throughout the entire 30-year lifespan of the fighter aircraft, whereas the evaluation of candidate risk considers the risks that cannot be quantified economically. The economic costs that will incur provided the individual risk occurs were considered in the economic evaluation. This applies also to the costs associated with risk-mitigating measures.

The New Fighter Program has carried out a large number of technical and operational analyses. Expert panels have subsequently given the candidates marks and ranked them on the basis of the analyses. Using the Delphi method within each of the four sub-areas, the experts fact that the experts have had the opportunity to rank the candidates evenly.

The reasons are, among other things, that the aircraft is expected to be produced in a large number and that the contractual and development basis for keeping the aircraft technically and operationally relevant throughout its lifespan is present. With regard to the Eurofighter and the Super Hornet, the expert panel’s evaluation is that the candidates’ future development is at the same level.

In relation to the sub-area of candidate risk, the Super Hornet has been assessed to carry the least risk of the three candidates even though the candidates in this area are almost equal. The reasons are, among other things, that already today the Super Hornet is used operationally by other countries, and that risks associated with, for example, the procurement and implementation of the aircraft are assessed to be low. The risks associated with the Joint Strike Fighter and the Eurofighter are assessed to be higher. 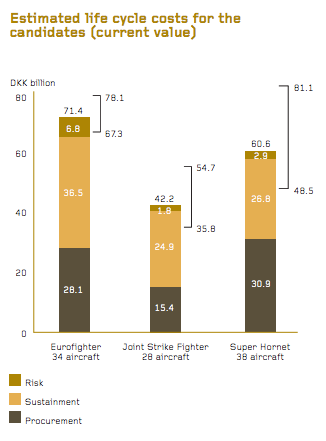 Furthermore, the Eurofighter has higher maintenance costs per flight hour than the Joint Strike Fighter and the Super Hornet. The procurement price per aircraft is the highest for the Eurofighter.