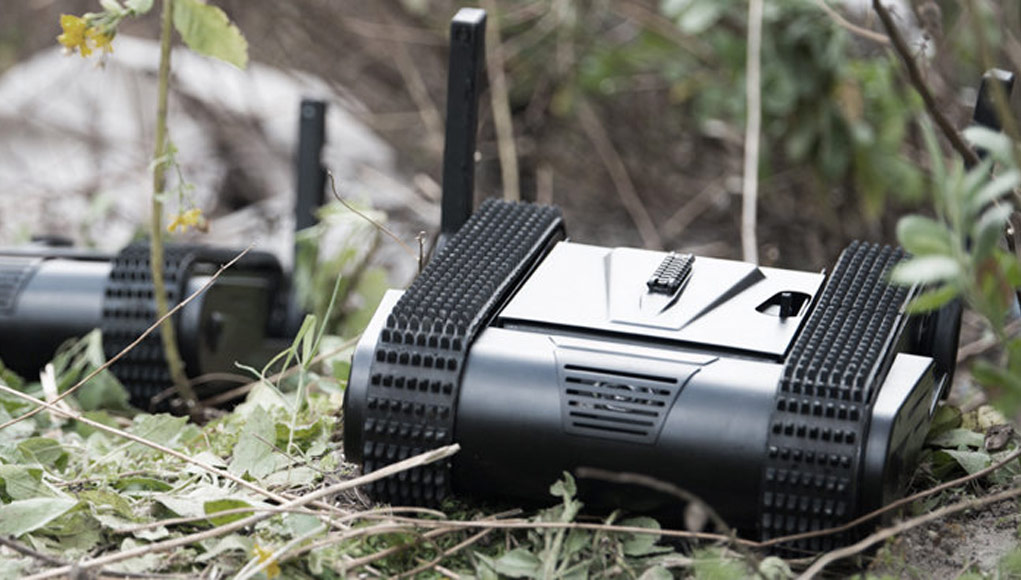 Man portable, miniature robots have been used in military missions for several years, but due to their size, limited payload capacity and complex controls, their uses were restricted primarily to counter-improvised explosive devices (C-IED) and reconnaissance. A new robot developed by Israel’s General Robotics is introducing a new breed of ‘combat robots’ at Eurosatory 2016, designed to assist combat teams in urban assaults and counter-terror operations.

At a mission gross weight of only 12 kg (26.5 lbs) the tactical tracked robot dubbed ‘DOGO’ packs enough battery power to last for a 2-5 hour mission, eight cameras covering 360 degrees, a fully loaded Glock 26 pistol and accessories mounted on Picatinny rails. The equipment carried on the rails provides various non-lethal effects, such as pepper spray module or a dazzler that temporarily blinds an aggressor from a distance of 5-10 meters.

According to Shachar Gal, VP Business Development at General Robotics, DOGO was designed for Special Forces, SWAT teams, and infantry missions. The small, lightweight robot can climb stairs and move across difficult terrain. “The robot have certain advantages over the human warfighter.

Since the stable platform is more accurate than a human, and, when operated from a safe distance, enables more time for situational assessment rather than the warfighters’ instinctive response. While the robot is limited in pursuit, using two DOGO in mutual cover would keep the target covered even in pursuit, trying to escape or engaging one of the robots. The small, stealthy robot is designed to be effective against targets much higher than itself – DOGO can aim its weapon very low – at targets lying on the floor or hiding under a bed, or aim up to hit a standing person at close range.

The robot has an integral, locked case designed for the 9mm Glock 26. The fully loaded weapon has 14 cartridges is quickly attached to the DOGO, with remotely controlled safe/arm mechanism. The DOGO Robot is controlled by the ‘Ranger’ Remote Control Unit (RCU) developed by General Robotics. The RCU uses a commercial, off the shelf (COTS) Ruggedized FZ-G1 Panasonic Toughpad, encased with jacket providing the robotic controls.

The RCU provides joystick controls to navigate the robot with ‘Point & Shoot’ interface that allows the operate to designate the weapon towards a target by touching the target as it appears on the screen. Operators that mastered the system after short training have demonstrated the ability to bring the weapon and fire five rounds in two seconds.

The robot generates persistent 360° view around the vehicle, provided by six cameras; two additional cameras provide boresight views for the weapon and payloads. The robot also has two-way audio and encrypted communications to control the payload and weapon, listen and intervene in hostage situations.