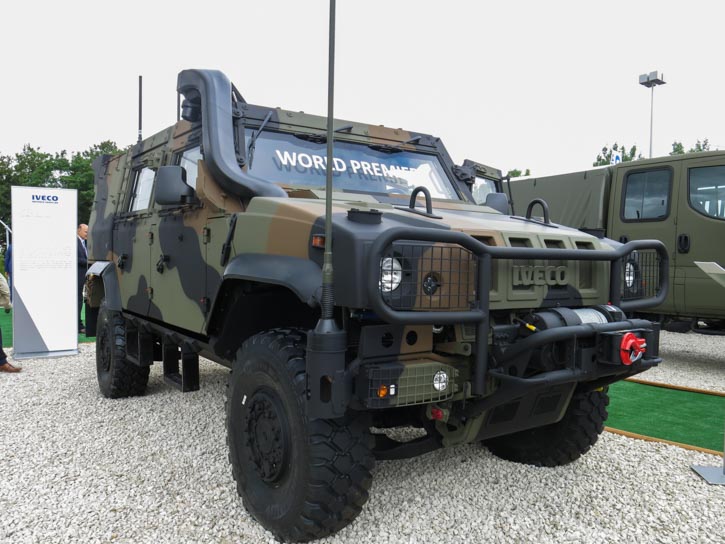 Iveco introduced at Eurosatory 2016 an improved, higher performace new variant of its Light Multirole Vehicle (LMV) family of light tactical vehicles. Sofar Iveco delivered over 4,000 LMVs to 13 customers worldwide. The largest fleets are operating in Italy, Belgium, UK, Russia and Spain. The new vehicle designated LMV 2 is a major improvement over the original LMV, that has been modified and adapted through the years, adding more protection, capacity and electronics to meet user demand.

LMV 2 increases the baseline platform to better meet new demands, for higher performance, greater reliability and increased crew comfort. The result is a growth of about 40 percent in payload capacity from 800 up to 1500 kg, depending on vehicle configuration and armor suite. The previous model was limited in its payload carrying capacity, especially with some configurations required to carry over half a ton of electronic equipment to support combat missions. In such circumstances, electrical power supply has also been an issue with past versions.

The new version is powered y a 220 hp diesel engine coupled to an upgraded driveine capable of managing increased power levels. The air filtration has also been enhanced to cope with the increased engine intake. A new automatic eight speed gearbox (adding two speeds over the previous transmission). This change is making gear transitions smoother, particularly off-road. The vehicle is also equipped with a new, automatic drive management (ADM) system to support optimized performance in off-road mobility. Another improvement is the addition of electrnic stability control (ESP) that also helps manage off-road mobility and enhance driving safety on road.

The protected crew cell is supports five fully equipped soldiers with body armor and combat webbing. Protection level has been improved in the new model, particularly in the IED protection, by using an extra hinge to the ballistic and blast protected side doors. The new hard top ‘dual role’, mae of a ballistic steel monocoque framework with lightweight aluminum/steel roll bar, allows the vehicle to carry a manual or remote weapon station turrets. Using new, advanced passive protection in the side doors enables the designers to maintain the door weight by increasing the level of protection.

Maintenance has been simplified by reducing the number of replaceable systems and improving the type and location of components that have been hard to access in the past. Furthermore, the digitised dashboard provides maintenance data and indications on demand, allowing the crew to accurately review and schedule maintenance tasks, instead of predicting and scheduling preventive maintenance.