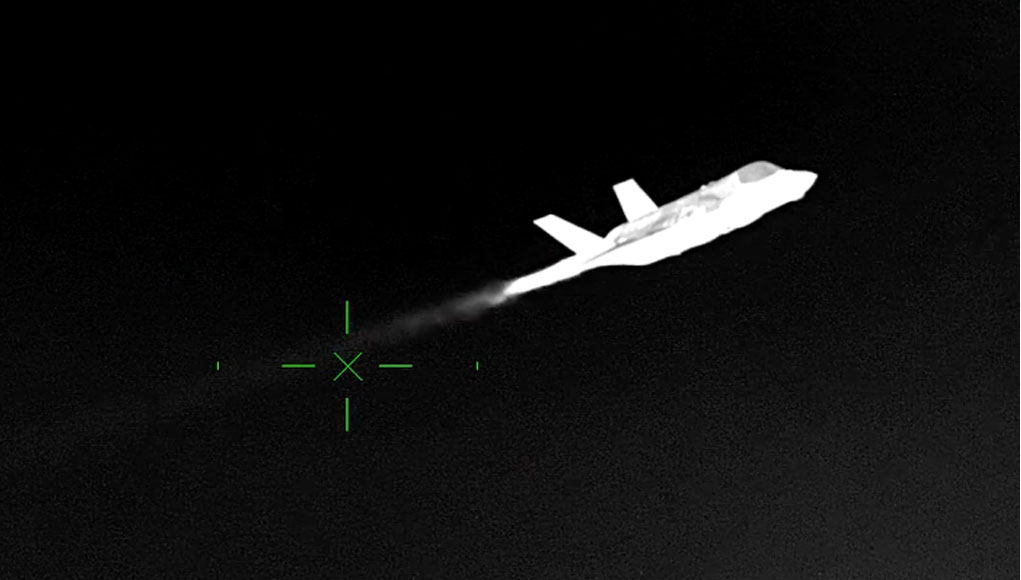 FLIR Systems published today a short video depicting the F-35 Lightning II 5th Generation fighter during its flight display at the recent Farnborough Airshow (2016). The clip shows the JSF after a simulated takeoff, in forward flight, approach to vertical landing and hover.

While the video highlights the extremely hot air exhaust during vertical hovering, it also shows the striking low thermal contrast of the skin, canopy and engine bay, against the sky, which testify to the Lightning II’s effective thermal masking. While the aircraft and exhaust are clearly visible against the sky background in the flypast, it is clear that such image is taken with maximum gain, which isn’t likely to be useful for normal operation. In other shots that are tuned to show the exhaust heat, the aircraft itself almost blends with background, as it would be, when seen in a front view that masks most of the jet exhaust. Low contrast objects would be less detectable by thermal imagers, at long range. For aircraft it also improves protection from heat seeking missiles.

Critics of the F-35 claim that while its stealth design denies its detection by radars, infrared imagers can easily spot the aircraft at long range, by its heat signature. Unlike Russian, Chinese and European aircraft manufacturers that have employed infra-red search and track (IRST) technologies, US services are relying almost exclusively on radar for aerial situational awareness. While the F-35, like every physical object, has a thermal signature, this thermal scan shows its designers made significant effort to ‘flatten’ its thermal image, making the aircraft less detectable and trackable at long distance.

The video clip shown below compares the recent images taken with FLIR Systems’ new Star SAFIRE 380-HDc high definition FLIR, with a similar video taken by another FLIR sensor in 2010, showing the F-22 Raptor. At the recent Farnborough show the F-35 Lightning II performed a flyby and hover, but did not perform high performance maneuvering like the Raptor did back in 2010. Previous FLIR videos of 4 Generation fighters such as the F-16, Typhoon, and Su-27 showed skin area with much higher thermal contrast.

At that short distance, the FLIR SAFIRE 380-HDc camera details the hot and cold parts on the aircraft, for example, the windows of the Distributed Aperture Systems (DAS), where high-resolution IR cameras are located.