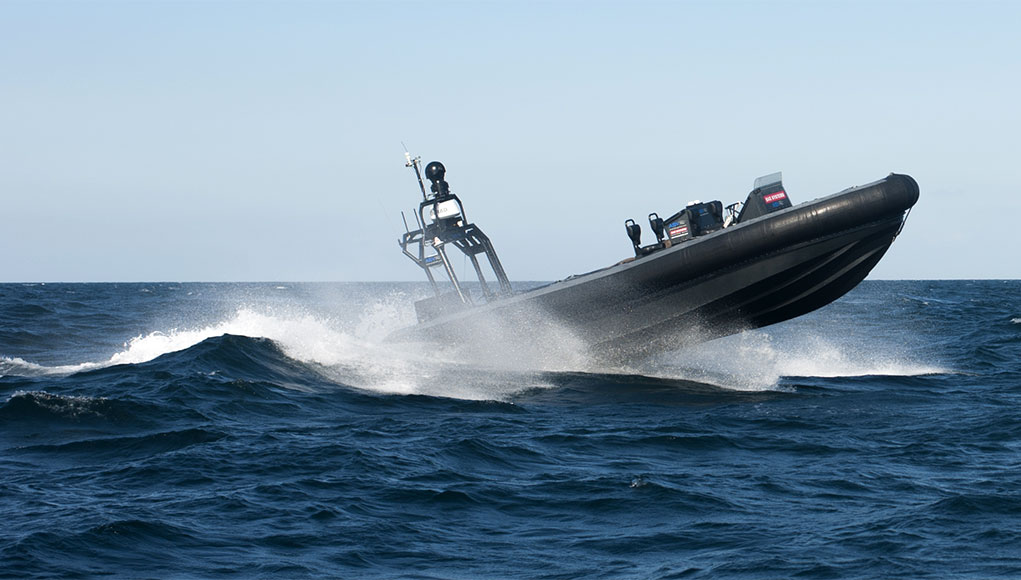 Almost 50 unmanned systems from the UK, USA, Sweden, Germany, France, Italy, and Austria participated in a month-long war game for robots, organized by the Royal Navy. Spanning air, surface and the undersea domain, ‘Unmanned Warrior 2016’ (UW16), has been in the making for almost two years, with dozens of players from different nations invited to take part in this unique operational demonstration, held as part of NATO’s Joint Warrior exercise.

A system designed for long-endurance autonomous operation in the open sea is the ‘Sensor Hosting Autonomous Remote Craft’ (SHARC) from Boeing and Liquid Robotic. Four such crafts participated in Unmanned Warrior 2016. They were used to deliver continuous maritime intelligence, surveillance, and reconnaissance missions for up to a year without refueling or servicing. These crafts employ innovative wave- and solar-powered propulsion system, and carry a sensor suite provided by Boeing. Its ability to conduct continuous patrols using autonomous navigation gives SHARC unique access to undersea, air and space domains. Multiple SHARCs can be monitored and controlled by a single, shore-side operator. To date, more than 50 sensors have been tested and integrated on SHARC, including Automated Identification System (AIS), acoustic sensors, electromagnetic sensors, and imaging systems. SHARC’s onboard open architecture, commercial standards and modular configuration that allows rapid integration of advanced technologies and innovative payloads.

Unmanned Surface Vessels were the relatively new class evaluated at Unmanned Warrior 2016. Several models participated in the exercise, including the Halcyon from Thales, which carries the T-SAS sonar, that delivers live, high-quality sonar images to shore-based operators over long distances. In fact, the Halcyon is being developed as part of the Thales-led consortium solution for the first phase of the Anglo-French Mine Countermeasures program to assess the future mine warfare capabilities of the UK and French navies. Thales is the system integrator for the Maritime Autonomous Platform Exploitation (MAPLE) program, which also evaluates the command and control aspects of the system, through the Autonomous Control Exploitation and Realization (ACER) deployed on the vessel Northern River, which provided a warship command surrogate platform. Unmanned aerial vehicles such as the BlueBear Blackstart flew airborne relays linked the ACER with remote unmanned vessels at sea.

ACER also provided commanders with control over missions through the use of ‘collaborative autonomy’ of multiple unmanned, autonomous platforms and sensors cooperating on specific missions. In the third week of the exercise anti-submarine and counter-mine, missions scaled up to include ten different vehicles from three countries, operating in four squads operating across air, surface and underwater domains.

The system is based on BAE Systems’ Systems Combat Management System and includes enhancements to support planning and decision-making using off-board systems. Hosted within a transportable command and control center, ACER is capable of integrating several unmanned systems and platforms from multiple suppliers, minimizing the number of screens and controls operators need to conduct successful missions.

Another USV provider, Atlas Elektronik UK (AEUK) deployed its 11-meter long mine hunting USV ‘ARCIMS’ to Unmanned Warrior 2016. ARCIMS carries the AQS-24B Synthetic Aperture Sonar (SAS) made by Northrop Grumman Corporation. Although the system is currently undergoing final integration, the company has already received firm orders for two ARCIMS. In the weeks that preceded AW16, the ARCIMS received final tweaks at the Portland Harbor, undergoing integration testing of the AQS-24B, that included remote launch and recovery of the towed sonar at the. The AQS-24B is a towed mine hunting sensor used by the U.S. Navy, features the world’s only high-speed synthetic aperture sonar for mine detection, localization, and classification, and an optical laser line scan sensor for the identification mine.

A smaller unmanned naval platforms taking part in the exercise was BAE Systems’ Pacific Class 950 Unmanned Rigid Inflatable Boat (P950 RIB). This RIB is capable of traveling at up to 47kts for up to 12 hours at a time. Remotely controlled via ACER, the RIB can also operated autonomously, using technology developed by BAE Systems and ASV Ltd with support from suppliers including  Deep Vision Inc and Chess Dynamics Ltd.

Those sonars often needed targets to detect and unmanned systems provided these services as well. Saab provided the AUV62-AT an acoustic target that replicates the active and passive signature of a submarine, delivering essential ASW simulation and training for the entire maritime force.

USV were also operating Mine Counter-Measures (MCM) missions, employing various sensors and countermeasures to defeat mines. Among these countermeasures was the Sea Wasp from Saab. This small, highly maneuverable waterborne counter-IED vehicle is remotely controlled to deliver a demolition charge close to a mine, enabling MCM operators to neutralize the target from safe distance. Yesterday Saab announced the acquisition of Nordic Defense Industries (NDI), a Danish manufacturer of mine disposal charges, thus expanding its MCM offering.

Other systems participating at the UW16 demonstration were aerial vehicles of different sizes and types. Among the platforms being used were the familiar Austrian S-100 Camcopter from Shiebel, and American Scan Eagle from Insitu and Boeing, equipped with Visual Detection and Ranging system. Boeing hopes it can offer as a replacement to the Royal Navy’s ScanEagle, expected to be phased out of service in 2017. Other systems tested were the NRQ-21 and Indago quad rotor, from Lockheed Martin. UW16 provided the stage for the first maritime appearance of new platforms – the Thales Watchkeeper, operating the i-Master radar over the sea and the Leonardo SW-4 Solo optionally piloted helicopter on surveillance missions, carrying the Osprey flat-panel electronically scanned radar, EO/IR payload, and SAGE electronic support measures system.

“The technologies and concepts being demonstrated in Unmanned Warrior have the potential to fundamentally change the future of Royal Navy operations just as the advent of steam propulsion or submarines did for example.” Commander Peter Pipkin, the Fleet Robotics Officer, said. “By working closely with a wide range of system providers from defense, industry, and academia, Unmanned Warrior has also become the catalyst for a level of discussion and participation that sets the gold standard for collaborative projects.”