The first two F-35s expected to land in Israel next week will be the first 5th Generation jet fighters the U.S. hands out to a foreign ally. The two ADIR Jets are only the beginning. Over the next eight years, Israel will receive 50 aircraft forming two full ADIR squadrons flying the F-35. No. 140 Squadron will be the first to receive the new fighters. The initial batch of 19 is being delivered in the standard ‘A’ configuration while the remaining 31 will be fully equipped F-35Is, fitted with indigenous Israeli systems and weapons.

As the first 5th Generation stealth combat aircraft to enter operational service outside the USA, the ADIR introduces new dimensions of air warfare, hitherto available only for the US Air Force. The new fighter will benefit from extremely low radar signature, enabling it to operate undetected inside enemy territory and within missile defended airspace. Besides, the unique networking capability allows a team of several F-35s to share sensor information, situational picture, and tactical decisions,  thus dominate an airspace much larger than previous generation fighters could do.

While the F-35 is not as fast as its predecessors, it is designed to fly longer and faster than most fighter jets, using internally stored fuel and armament, thus maintain the low-observable characteristics of the aircraft. Such sensor fusion and cooperative mission performance will enable ADIR to operate autonomously, without dependency and support on other aircraft that may be vulnerable to enemy defenses or provide early warning to the enemy. These capabilities and other attributes of the new fighter will provide the Israel Air Force a game-changing platform that has not been seen in the region since the introduction of the F-15 Eagle (by the IAF), 40 years ago.

Israel is the first, but not the only nation getting new Christmas gifts this year; Saudi Arabia is also expecting its first six ‘Advanced Eagles’ this month. As for the F-35, all other operators except Israel are keeping their jets at Luke Air Force Base in the USA to support the joint training center. The US Air Force’s 944th Fighter Wing is the training unit responsible for supporting all foreign customers, including Israel, South Korea, Japan, and the F-35 partner nations – Australia, Canada, Denmark, Italy, the Netherlands, Norway and Turkey. However, unlike all other countries Israel opted to have its planes delivered to the country, to get the first unit operational as quickly as possible. By the end of 2017, Israel is expected to have nine ADIR jets operational.

Israel Air Force Base in Nevatim will be the first ADIR operating base. The first aircraft that arrive on Monday will help train the unit’s cadre of aircrews and ground support personnel, by the first teams that returned from training in the USA. The new squadron is expected to reach initial operational capability (IOC) in few months. The pilots selected to man the first unit are all experienced fighter pilots but the F-35 will not be exclusive for veterans – in two years pilots fresh from flight school will be accepted to transition to the new fighter. 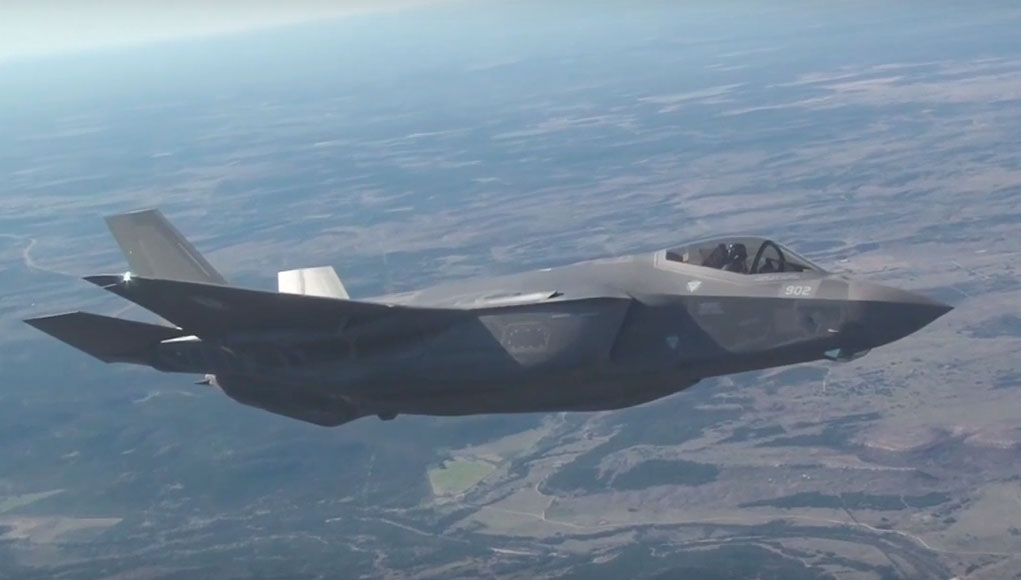 Throughout the training and operational use, the IAF plans to utilize flight simulators extensively. Pilots are expected to fly about half the flight hours on the aircraft and half on simulators. The rate of the simulator to flight hours may even increase after the air force gains experience with the new platform. Maintenance, including the most complex D-checks, will also be done in the country, in maintenance and support facilities that will be established specifically for the new jet.

36 years back, in July 1980 when Israel received the first F-16A fighter jets, it took the first squadron few weeks to achieve IOC and, once operational status validated, eight of the new aircraft were sent on the longest mission the IAF ever flew until then, to attack the Iraqi nuclear reactor. Nowadays Israel operates regularly over the Middle East, although Jerusalem rarely takes credit for these activities. Having a stealth fighter that can go anywhere, virtually unseen, would become a significant capability to maintain Israel’s claimed freedom of action.

Israel’s appetite for the new stealth fighter is not satisfied with the 50 jets it has already committed to buying. The Israel Air & Space Force (IAF) plans (and lobbies locally and abroad) to get the third squadron, which is likely to fly the F-35B Vertical Short Takeoff and Landing (VSTOL) variant also used by the US Marine Corps. Although the B variant is often used from aircraft carriers (RAF) and landing support ships (USMC), the fact that it can use short runways will enable the IAF to maintain operational tempo even after its bases suffer attacks from ballistic missiles or rockets. Israel already faces constant threats from hundreds of thousands of such rockets and missiles, some of them equipped with precision guidance capability enabling an efficient attack on strategic targets such as air bases. The IAF prepares for such contingency, but the introduction of VSTOL capable F-35B along with V-22B Tilt Rotor aircraft that could be used for aerial refueling of these jet fighters would provide a significant improvement in this field. While the acquisition of the B model is supported at the political level, officials within the IAF are not keen on acquiring this aircraft, due to its shorter range, the limited payload carrying capability and higher cost.

The alternative to the F-35 has always been buying more F-15s. The F-15 is still in production, and, in fact, keep getting better over time. Designated ‘F-15 Advanced’ (formerly F-15SA) the new fighter jet is currently undergoing test and evaluation flights, before delivery of the first six aircraft to Saudi Arabia. Riyadh is expected to receive the new planes in few weeks. They will be based at the Royal Saudi Air Force airbase in Tabuk. The Saudi aircraft is considered the most advanced F-15 variant ever built. It is equipped with many advanced features, including two powerful engines, new AESA radar, redesigned cockpit a new generation electronic-warfare (EW) self protection system that implements capabilities developed for 5th Generation fighters (F-22/35) and infra-red search track (IRST) pods. Its speed and payload carrying capability exceed that of the F-35A, but the ADIR is superior in maneuverability, stealth, and sensor fusion performance. Qatar has also selected the F-15QA – the 36 Advanced Eagles will replace French Mirage 2000 jets made by Dassault Aviation. Qatar has an option to double the number of planes it will buy. The first batch of 36 will cost US$4 billion.

The F-35 acquisition is the most expensive procurement project ever made by Israel, but it is not the only one on the table. The IAF still maintains a powerful strike force of F-15I ‘Raam’ (Thunder) aircraft that entered service in 1998. As demand for F-15s is maintained, particularly within the Middle East, the Advanced Eagle production line is expected to remain hot at least until late 2019, allowing Israel to buy few more of these planes. As a temporary measure, the Pentagon agreed to transfer 10 F-15D (two seaters) aircraft from US Air Force surplus to Israel, to compensate for attrition and provide spare parts. However, as reflected from the Qatari deal, the cost of a new F-15 (improved over the current Israeli I model) is over $110 million. In comparison, the cost of the F-35A continues to decrease, with higher volume and implementation of cost cutting measures. Despite these efforts, the price of an F-35A including its engine is still above $100 million but is expected to go below $85 million when production lines of aircraft and engines pick up higher volumes.

Photos of the F-35 taken at the Lajes air force base in the Azores, are published here courtesy of Miltary Aviation Review – Andre Inacio