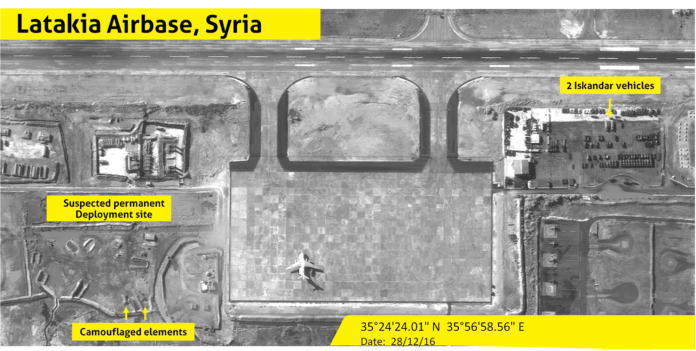 Satellite imagery analysis by Imagesat International (ISI) intelligence experts revealed deployment of Iskandar (SS-26 “Stone”) advanced missile system vehicles as a part of the Russian deployment at Hmeimim airbase in Latakia, Syria. A single Iskander Transporter Erector Launcher (TEL) was first spotted in footage broadcast by Russia’s Zvezda TV channel in March, 2016. In the ISI images, two Iskandar Vehicles are clearly visible at a logistic site beside the northeastern part of the runway. Those two elements are most probably SS-26 Trans-Loading vehicles (Transloaders). The Iskander missile system elements are mounted on 8×8 MZKT-7930 chassis.

The satellite imagery is the first visual evidence of the system presence in Syria. This geospatial evidence approves several unconfirmed reports of the presence of Iskandar missiles in Syria and details the system’s deployment site.

According to high-resolution images taken by ISI’s EROS-B satellite, the analysts assume the system is routinely deployed under camouflage nets at a nearby unpaved compound. Most probably, heavy rain and floods forced the re-deployment of those two elements to the location in which they were revealed by ISI. Further analysis uncovered two additional elements covered by camouflage nets deployed at the compound, which are most probably part of the Iskandar system.

In March 2016 press reports indicated Russia had deployed Iskander missile systems to its Hmeimim Air Base in Syria, but it was unclear these vehicles carried ballistic or cruise missiles. Russia has repeatedly used sea-launched and air-launched cruise missiles in supporting the Syrian Army in its battle against rebels, but so far refrained from using ballistic missiles. The Syrian regime has used ballistic missiles of all types, through the five-year conflict and have asked Moscow to send the export variant – Iskander-E but there were no indications such shipments were made.

From its base in Hmeimim the strike range of the SS-26 system covers the entire area of Syria, In service with the Russian Ground Forces since 2006 the 9K720 Iskander-M system carries two short-range tactical ballistic missiles. Each missile carries a warhead of 480-700 kg. Various warheads are available, including penetrating high explosives (HE), fragmenting HE, fuel-air explosives, and submunitions. The Russians have also developed a nuclear warhead for this type.

Iskander-M has a range of 400-500 km (depending on the warhead used). It uses several guidance methods, including inertial, Glonass and scene matching techniques to achieve very high hit accuracy (4-7 meters).

Moscow often emphasizes the deployment of these weapon systems, particularly in the Kaliningrad enclave in the Baltic Sea, where it is considered mainly as a political deterrent move against Europe.