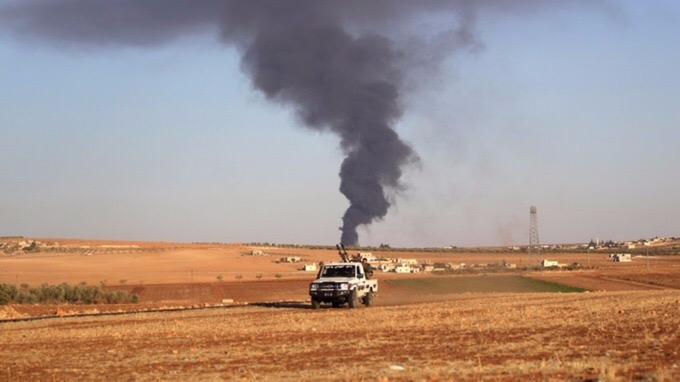 In recent weeks Turkish ground forces are engaged in combat operations against Daesh in the vicinity of Al-Bab. Coalition air forces have also targeted Daesh sites near the town in recent days, according to coaliton spokesman Colonel John Dorrian. These strikes followed Turkish criticism of insufficient U.S. support for its ground offensive.

“These strikes were the result of continued cooperation with Turkey, and we saw a window of opportunity where it was in our mutual interests to get those targets destroyed,” Dorrian said.

Coalition forces had struck four targets near al-Bab, where the US has supported Syrian Democratic Forces (SDF) and where Turkey has supported the Free Syrian Army (FSA) both fighting against a common foe, Daesh. On the other side, the Russians, are supporting the Syrian government forces, which are in conflict with SDF and FSA.

The joint Turkish-Russian operation conducted today was a major step that followed a memorandum of de-confliction signed between the two countries in Moscow last week.

The aircraft involved in the strikes on the Russian side included three four-aircraft formations of Su-24M, Su-25 strike fighters and Su-34 bombers. On the Turkish side the group included two formations of four F-16 and four F-4E Phantom 2000.

Russian sources said the combined air raid attacked 36 targets. Since there are no agreed protocols for air/air or air/ground cooperation between NATO and Russian air forces, it is not clear how the two forces coordinated these operations, if the attacks involved coordination with ground troops or were they restricted to air strikes in a ‘free play’ zone. According to Russian sources, based on the initial results, the joint effort has proved successful.

Rudskoi said it was the first time Russia and Turkey’s air forces had teamed up in this way.

Russia and Turkey had been on opposing sides of the nearly six-year Syrian conflict, with Moscow backing Syrian president Bashar Assad while Ankara supported the rebels. The lowest point was in 2015 after a Turkish F-16 shot down a Russian Su-24 killing one of the crewmembers.

But in recent months, particularly after the failed coup in Turkey, the two countries have worked together, and will broker peace talks later this month in Kazakhstan aimed at finding a political solution to the war.