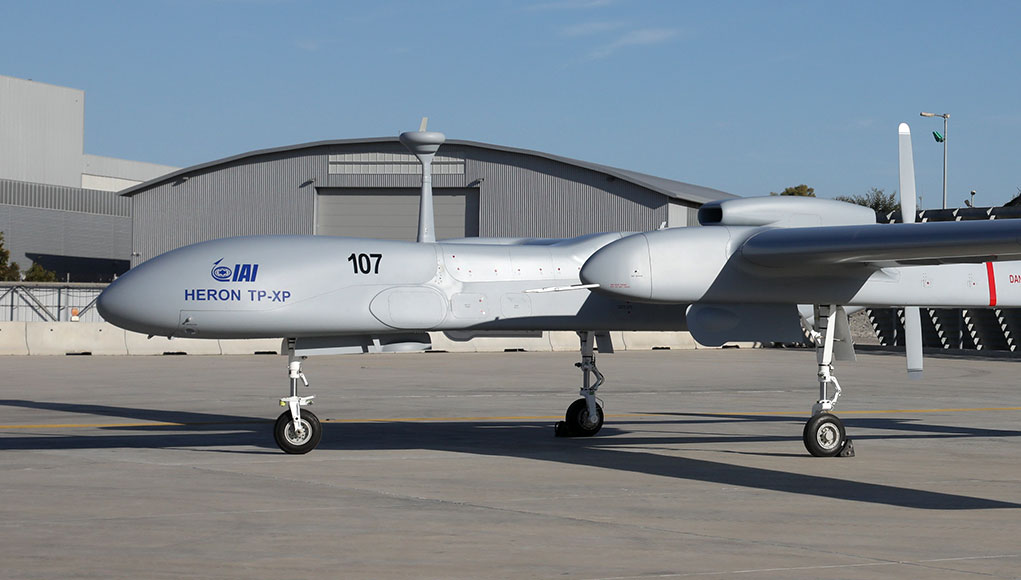 Israel Aerospace Industries (IAI) is introducing an export version of the Heron TP, the largest member of the Heron family of remotely piloted aircraft systems (RPAS). The new version retains the gross takeoff weight (5.4 ton) and strategic capabilities of the TP – operational ceiling of 45,000 ft, mission endurance of 30 hours, but halves the payload capability of the TP, limiting the maximum payload capacity to 450 kg. – the same as the payload of Heron I.

IAI is unveiling the new Heron TP-XP at the Aero India 2017 airshow in Bengaluru. The introduction of this strategic platform is India comes after a long delay in export approval of Heron TP to India since New Delhi has not approved the MTCR regime. The introduction of Heron TP-XP will enable IAI to expand its UAV offering to more customers. Following the MTCR approval by India last June, and the completion of the first flights of Rustom 2 – India’s indigenous MALE UAV – in November last year, the Indian market is more recipient to competitors, which the new version is positioned to meet.

“The Heron TP-XP introduces air supremacy at a higher level than currently exists in India,” Shaul Shahar, IAI Executive Vice President and General Manager of the Military Aircraft Group told Defense-Update. “With an emphasis on double flight speed, high altitude, and enhanced payload capability. This system is the latest derivative of the Heron TP, considered to be one of the world’s leading UAVs. The possibility of offering the Heron TP-XP opens up additional opportunities by allowing us to expand the range of solutions we can offer to our customers.”

Compared to other Heron family platforms, Heron TP-XP offers a more efficient multi-mission and multi-payload platform that is more suitable for strategic missions. It is designed to operate at very long range, using an integral satellite link and is and is capable of operating in extreme weather conditions. One of the main advantages of Heron TP-XP is its ability to cruise above the commercial traffic, at altitudes of up to 45,000 ft. This. As the TP version, Heron TP-XP uses triple redundant avionics, automatic take-off and landing and meets NATO and other accepted world standards and complies with STANAG 4671. These capabilities make Heron TP / TP-XP uniquely capable to ‘coexist’ in crowded, commercial airspace.

The main difference between Heron TP and TP-XP is the TP’s large internal cargo bay carrying up to one tonne of payload, which is the reason its export is limited as it exceeds the limitations imposed by the Missile Technology Control Regime (MTCR). To clear volume for these large payloads, the TP’s satellite terminal is placed in a dome above the fuselage. Heron TP-XP has a more slender design, with satellite antennae integrated inside the 14-meter long fuselage and a smaller internal payload bay. However, the large fuselage and huge wings (26 m’ span) provide more than adequate space for the installation of multiple payloads that may comprise electro-optical, radar and electronic surveillance missions. Since maximum fuel can be carried with full payload Heron TP-XP can perform all missions with maximum payloads at the maximum endurance.