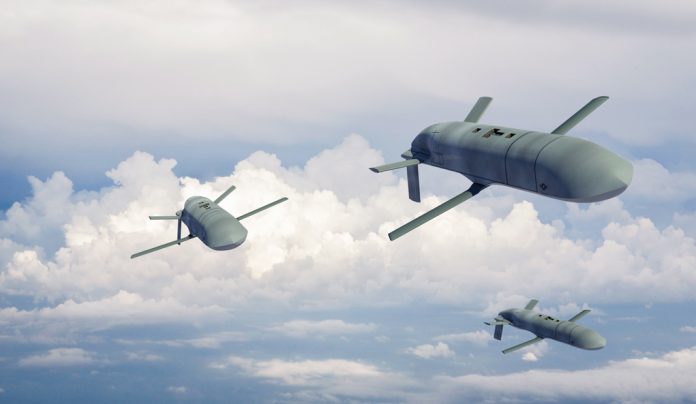 DARPA has recently moved to phase 2 of the Gremlins program which envisions volleys of low-cost, reusable unmanned aerial systems (UASs) that could be launched and later retrieved in mid-air.

“The Phase 1 program showed the feasibility of airborne UAS launch and recovery systems that would require minimal modification to the host aircraft,” said Scott Wierzbanowski, DARPA program manager. “We’re aiming in Phase 2 to mature two system concepts to enable ‘aircraft carriers in the sky’ using air-recoverable UASs that could carry various payloads—advances that would greatly extend the range, flexibility, and affordability of UAS operations for the U.S. military.”

“GA-ASI is committed to the development of an unmanned distributed sensing and targeting system to support tomorrow’s warfighter,” said David R. Alexander, president, Aircraft Systems, GA-ASI. “At the same time, we see the potential for using this technology on our own Predator B/MQ-9 Reaper RPA to offer our customers new mission capabilities.”

The Gremlin aircraft is one in a line of new Small UAS (SUAS) being developed by GA-ASI. The vehicle is capable of one-hour time-on-station at a range of 300 nm while carrying a modular 60-pound payload.

GA-ASI was awarded a contract for Phase 1 of the program in March 2016. While Phase 1 was conceptual in nature, Phase 2 aims to mature the design and perform in-flight risk reduction testing for the C-130-based recovery system. Activities will include Program Design Review (PDR) for the aircraft and recovery system, ground testing to validate key technologies, and flight test to demonstrate safety and recovery system performance of multiple Gremlin vehicles. The program is expected to culminate in an air launch and recovery demonstration in 2019.

The program envisions launching groups of UASs from multiple types of military aircraft—including bombers, transport, fighters, and small, unmanned fixed-wing platforms—while out of range of adversary defenses. When the gremlins complete their mission, a C-130 transport aircraft would retrieve them in the air and carry them home, where ground crews would prepare them for their next use within 24 hours. The gremlins’ expected lifetime of about 20 uses could provide significant cost advantages over expendable unmanned systems by reducing payload and airframe costs and by having lower mission and maintenance costs than conventional manned platforms.