The US Army Communications-Electronics Research, Development and Engineering Centre (CERDEC), recently introduced a futuristic heads-up display (HUD) that have the potential to empower the dismounted warfighter by laying a synthetic, game-like information and sensor overlay over the battlefield picture they currently experience.

The Army has been working on developing miniature eyepiece technology since 2008. Current commercial technology compresses images into sizes small enough to fit into tablet and cell phone-sized windows, but getting a high-definition image into the very tiny eyepiece was a challenge that could not be met with commercial, off-the-shelf hardware.

Current technology is able to compress monochrome images, but the ultimate goal is to display video, and augmented reality images in full color.

Such ‘Tactical Augmented Reality’ (TAR) system will use a helmet-mounted eyepiece which connects via a wireless connection to a small ‘wearable’ computer and positioning system. The thermal sight the soldier wears will also link wirelessly to the system, as well as the weapon’s sight, adding day/night view, orientation and weapon aiming data.

When soldiers point their weapons or look at targets, the sight image of the target is displayed in the eyepiece, with relevant details like the distance to target, and velocity of its movement. Other relevant information related to the situation, such as ‘combat ID’ and location of other targets or friendly forces can also be displayed. The eyepiece also has The eyepiece even has a split screen, so for example, if the rifle is pointed rearward and the Soldier is looking forward, the image shows both views, he said. The eyepiece even has a split screen, to maintain critical information in sight (for example, a weapon’s view and a forward view).

Tactical Augmented Reality provides sensor imagery with integrated mapping, navigation, and 3D surface models for greatly enhanced operational maneuver and fires. The wireless links enable seamless integration of devices and sensors and sharing information and images with other members of the squad. 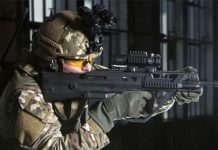