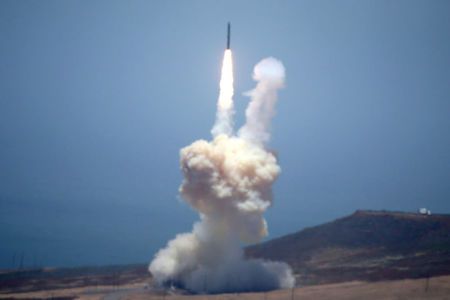 The U.S. Missile Defense Agency conducted today a successful, long-awaited test of the Ground-Based Midcourse Defense (GMD) element of the Missile-Defense system protecting the Continental USA from attacks by intercontinental ballistic missiles (ICBM). Initial indications are that the test met its primary objective, but program officials will continue to evaluate system performance based upon telemetry and other data obtained during the test.

During the test, an ICBM-class target was launched from the Reagan Test Site on the Kwajalein Atoll in the Republic of the Marshall Islands. Multiple sensors provided target acquisition and tracking data to the command, control, battle management and Communications (C2BMC) system that supports the BMD. The Sea-Based X-Band radar, positioned in the Pacific Ocean, also acquired and tracked the target. The GMD system received the target tracking data and developed a fire control solution to intercept the incoming missile. On 13:30 a ground-based interceptor was launched from Vandenberg Air Force Base, Ca. and its exo-atmospheric kill vehicle intercepted and destroyed the target in a direct collision.

“The intercept of a complex, threat-representative ICBM target is an incredible accomplishment for the GMD system and a critical milestone for this program,” said MDA Director Vice Adm. Jim Syring. “This system is vitally important to the defense of our homeland, and this test demonstrates that we have a capable, credible deterrent against a very real threat. I am incredibly proud of the warfighters who executed this test and who operate this system every day.”

The $244 million test, designed to validate reliability improvements to the Boeing/Orbital ATK booster and Raytheon/Aerojet Rocketdyne Exoatmospheric Kill Vehicle (EKV), specifically the “Configuration 2” booster and “Capability Enhancement-II Block 1” EKV. The successful test will enable Boeing to proceed with production and upgrading of 44 Ground-based Interceptors that (GBI) to be equipped with the new EKV by year’s end. By the end of 2018 MDA plans to follow on with a tougher test – intercepting a salvo of ICBMs.

Carefully inspecting the video that provided evidence of the successful intercept, one cannot ignore the anomaly visible on 00:59, showing an object closing in rapidly from the left and surviving the explosion.

Defense-Update consulted missile experts about this anomaly. We were assured that these anomalies do happen in tests, particularly at extremely high speed and long ranges. “Although it seems intriguing, visual tracking of such high-speed events, particularly in thermal vision, is challenging, particularly in the high resolution and high speeds required for exoatmospheric intercept of such fast targets. The high energy released on impact would also saturate the sensors and could cause the ‘smear’ in the infrared. It is likely that Boeing and MDA do not rely their assessment on visual evidence, but on other data, including telemetry from the interceptor and target, that would cease at the same time, to indicate an impact.”

The GMD system uses globally deployed sensors to detect and track ballistic missile threats. The interceptor made by Boeing, using a solid propulsion system made by Orbital ATK. It carries an exoatmospheric kill vehicle (EKV) made by Raytheon. The test was the first intercept for the new CE-II Block 1 kill vehicle that uses a newly designed divert thrusters meant to fix persistent problems guiding the kill vehicle. The test also validated upgrades on the boost vehicle side – including improving avionics and performance enhancements, refreshing technology on communication data terminals and modernizing ground systems, command launch equipment, and fire-control systems.

The test, designated Flight Test Ground-Based Interceptor (FTG)-15, will provide the data necessary to assess the performance of the GMD system and provide enhanced homeland defense capabilities. The last flight test of GMD in 2014 was successful but it did not engage a real target. The system failed during the three prior attempts. As important as this test is, the GMD system is still far from being able to provide reliable protection from a real-world missile threat – LAURA GREGO, Senior scientist at the Union of Concerned Scientists commented in a recent post.

The test comes as North Korea is pacing up its effort to develop and field intercontinental ballistic missiles that already can reach Guam and could soon reach Hawaii, Alaska and the US Pacific west coast. The 44 GBI interceptor force positioned at Vandenberg, CA and Fort Greely in Alaska are currently countermeasures capable of defeating such threats.