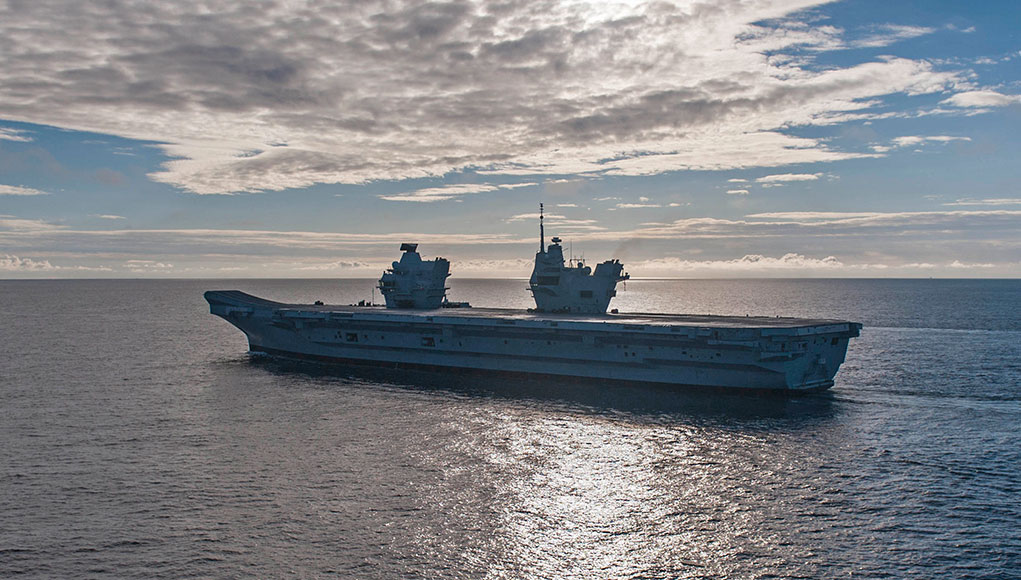 A major project currently reaching its climax is the induction of two 65,000 ton aircraft carriers – HMS Queen Elizabeth II and HMS Prince of Whales into service with the British fleet. The new carriers will become the centerpiece of the Royal Navy. QE II arrived today at its home port at Portsmouth, following its first sea trial last month; HMS Queen Elizabeth’s sister ship, HMS Prince of Wales, is structurally complete and is now in the outfitting phase. Queen Elizabeth will become the flagship of the Royal Navy, replacing HMS Ocean helicopter carrier in this role.

The introduction of two aircraft carriers will strengthen the Royal Navy commitment, particularly to the European defense that currently relies on US Naval super carriers and a single French carrier. The ship will operate with a crew of approximately 700, increasing to the full complement of 1,600 when aircraft are in operation.

As the two carriers become operational, 24 F-35B will arrive in the UK and, by 2023, earlier than planned, they will be ready to fly from those carriers. It will offer the largest dedicated air group of fifth generation fighters at sea, and the most potent Carrier Strike capability outside the United States. “It will endow the UK with the means to take our place alongside our closest allies – chiefly the United States and France, but others – in providing maritime air power in defense of shared interests around the world.” Rear Admiral Alex Burton, Royal Navy’s Commander UK Maritime Forces said at the Maritime Warfare Conference in Malaysia earlier this year. 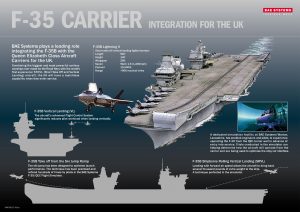 “Given our long-standing defense relationships in the Middle East, it is certain that a Royal Navy strike group – centered on a Queen Elizabeth-class carrier – will regularly deploy East of Suez. And it will be perfectly possible, should we wish, for Type 31 frigates to permanently operate from the Gulf region or from Asia-Pacific in the decades ahead.” Burton added.

The Royal Navy has also been working with the Government of Oman to explore berthing options in the new commercial port of Duqm. Situated outside the Strait of Hormuz it gives immediate access to the Indian Ocean and beyond and capacity for aircraft carriers and nuclear-powered submarines. Under the Five Powers Defense Agreement, the Royal Navy also keeps berthing space in Singapore. These facilities provide the UK Government with the option, should it wish, to project power and influence beyond the Atlantic.

Protectors of the Queen and Prince

Six Daring Class Type 45 destroyers are deployed to protect those task forces against aerial threats. For this mission, they carry the PAAMS – Sea Viper air and missile defense system, comprising the multi-mission Sampson radar and Aster missiles. The rotating AESA radar is housed in a distinctive sphere seated on top of the huge mast, soaring above the sea to extend visibility over the horizon. The missiles are stored in six vertical launch stacks of eight launchers each, providing a total capacity of 48 ready to launch missiles. Both Aster 15 and 30 are used.

Capable of launching eight missiles in about 10 seconds, the system simultaneously handles multiple targets. High flying aircraft and missiles flying at a speed up to Mach 4, can be intercepted up to 120 km away while low altitude targets and sea skimming missiles are engaged at the extended horizon – a distance of up to 25 km.

MBDA is currently developing a follow-on version of the Aster missile, known as Block 1NT. Italy and France are committed to this upgrading program for their naval and land-based Aster missile systems. Britain has shown interest but has not decided yet. The new weapon will receive a new RF seeker operating in the KA band and more powerful processor but retain the missile dimensions and guidance systems to maintain compatibility with existing systems. When completed, and if selected, Aster Block 1NT will provide a Type 45 destroyer limited missile defense capability against medium range ballistic missiles (missiles with a range of 1000 – 1500 km).

These destroyers also have the Mk8 medium turret with 4.5″ gun mounted in the forecastle. This weapon is common to all Royal Navy destroyers and frigates. One of the ships – HMS Duncan is also capable of carrying Harpoon anti-ship missiles.