Home Aerospace Missiles North Korean Deterrence Boosted with HS-15 Success
The largest ballistic missile developed and launched by North Korea, Hwasong 15 (HS-15) launched on the night of November 28, 2017 represents an impressive weapon developed by the rough state to achieve credible deterrence against the United States. According to analysts, the new Intercontinental Ballistic Missiles, (ICBM) carrying thermonuclear warheads could establish the North Korean nuclear deterrence force as early as next year.

Bigger and more powerful than any other missile developed by North Korea, HS-15 utilizes a new, more powerful propulsion system, enabling the missile to fly farther and carry heavier payload. On its first flight Hwasong-15 flew a short range vertical trajectory to an altitude of 4,472 km (2,780 miles) travelling 53 minutes splashing into the Sea of Japan 950 km east of its launch point at Pyongsong, 25 km northeast of the capital Pyongyang.

According to missile specialist Norbert Brügge, the missile uses the ‘Pektusan’, the first stage of the two stage missile uses an RD-250 clone liquid propulsion system developed by Pyongyang, comprising two combustors fed by common turbopump to increase takeoff thrust. According to the official statement from Pyongyang the system has speed correction and vector control, alleviating the use of steering engines used in previous models. The new propulsion is estimated to have 170 percent increase in thrust, compared to the Hwasong-14, which used four steering engines to stabilize the missile on liftoff. The HS-15 stores about 40 tons of liquid fuel, sufficient for 139 seconds of burn time. The new North Korean missile is similar to the old U.S. Titan missile from the 1960s.

Pyongyang claimed that the new missile can hit anywhere in the USA, and, based on the trajectory and distance flown, the missile would exceed a range of 13,000 km (8,100 miles) when launched in a lower, maximum range trajectory. 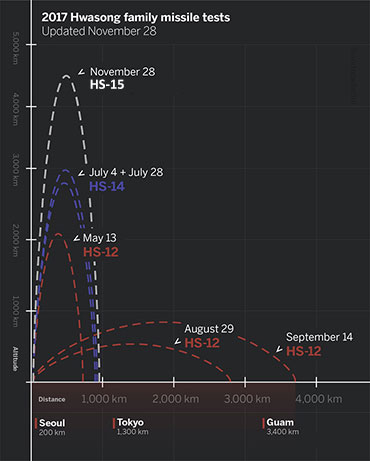 Previous North Korean missiles, such as HS-14 and HS-12 had the US Pacific bases and the west coast in range – areas partly protected by the US sea and land-based missile defense system. However, the long range of the new HS-15 means it holds at risk, albeit with a reduced payload, the central and eastern parts of the USA – areas that are not yet protected by anti-ballistic missiles.

However impressive the performance of the North Korean missile is, it is still a developmental system. Although Pyongyang claimed the missile’s powered flight as successful, Japanese sources indicated the missile or reentry vehicle may have broken up before hitting the water, a fact that could indicate a failure at the reentry phase. Previous tests of HS-14 earlier this year indicated a similar phenomenon. The HS-14 and HS-15 seem to be using different payloads. A notable change the HS-15 has from previous long-range ballistic missiles is a blunter nose cone which could carry larger payload and new reentry vehicle. 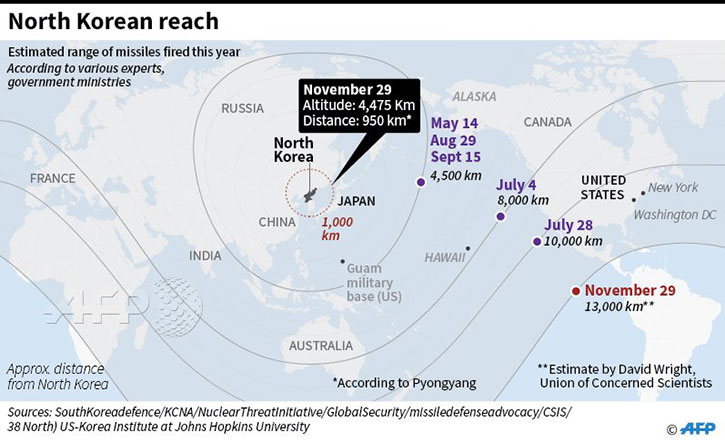 North Korea is likely seek to increase its production of the Hwasong-15 ICBM to overmatch the 44 Ground Based Interceptors (GBI) deployed by the USA. As a response, Washington will have to increase its capacity and production of GBIs, to stay ahead of the North Korean nuclear ICBM threat. It will now have to move forward with urgency on a third GBI site in the Eastern part of the United States to add depth of layers of ICBM defense by increasing the battle space and time to best defend the entire United States of America.

It is of note that the United States GBIs are not capable, from their current deployments in California and Alaska today, to defeat and defend against lofted North Korean Hwasong-15 ICBMs targeting Guam, Japan and South Korea. Japan, South Korea, and Guam are undefended technically today against a North Korean Hwasong-15 nuclear ICBM as the currently deployed missile defense capabilities in these regions cannot intercept the speeds of an ICBM, nor have they been required, tested, or proven to do so.

The Standard Missile-3 (SM-3) Block IIA, co-developed by the United States and Japan, has an inherent capability to intercept ICBMs. The interceptor is in low rate production and is scheduled next year for a final flight test against ballistic missile targets from the Aegis Ashore site in Hawaii and on the USS John Paul Jones (DDG 53), a Baseline-9 Aegis Destroyer, before being operationally deployed to Japan, Poland and the United States. It is of a national security imperative for Japan and the United States to test the SM-3 Block IIA against an ICBM target from an Aegis Baseline-9 ship as soon as feasible to enable current U.S. Baseline-9 Aegis BMD ships to defend Japan, Guam, and South Korea from the demonstrated North Korean lofted ICBM launch of the Hwasong-15.

Proving this capability on U.S. Aegis BMD Baseline-9 ships would enable an additional underlayer of ICBM defense that is sea-mobile, providing more confidence and increasing the percentage of intercept for the defense of Hawaii and major cities on the west coast of the United States against the North Korean Hwasong-15. Having a underlayer of SM-3 Block IIA defense allows more efficiency of the limited number of 44 GBIs until more GBIs are produced by the United States, which is estimated at 2022 when the Redesigned Kill Vehicle begins its first deployment.

To continue to provide stability to this region and this crisis, enabling flexibility in options and preventing nuclear proliferation, the United States of America must produce more ICBM interceptor capacity and capability as soon as possible. 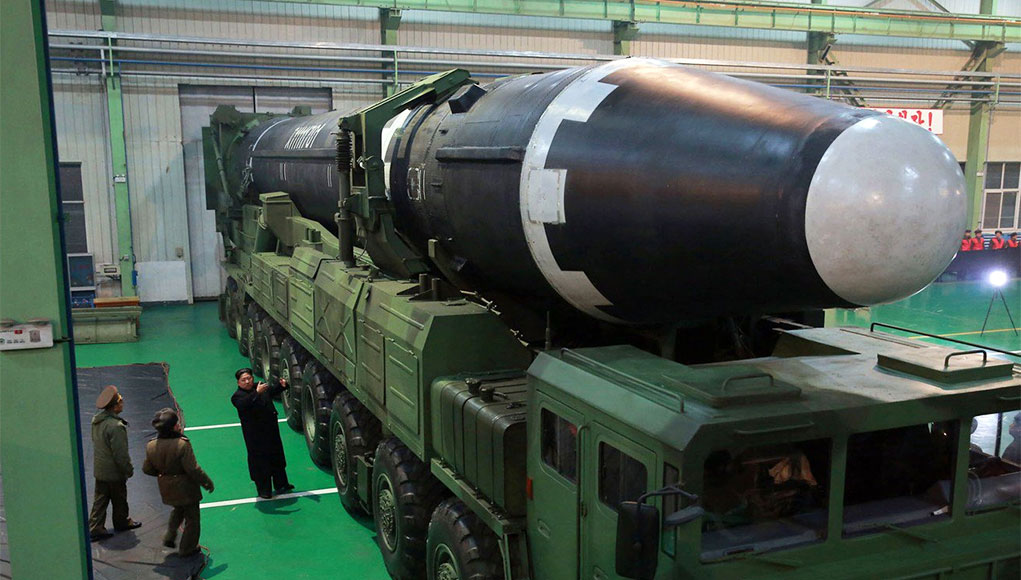