Initial assembly of the Su-57, the Russian fifth generation fighter, is slated to begin next year at the Gagarin Aircraft-Building Enterprise in Komsomolsk-on-Amur, in the Khabarovsk Region in the Russian Far East.

The Russian Aerospace Force will begin receiving the first batch of production Su-57 fighters next year (2018). The first production batch of Su-57, also known as prospective frontline aircraft system (PFAS) includes 12 fighters, 2-3 of them will be delivered within the first year of production. The Su-57 was formerly known as T-50 or PAK-FA made its first flight in January 2010. The developer hopes the Russian Air Force will field about 220 such aircraft between 2020 and 2030 but currently, the only secured order is for 12 low-rate production aircraft.

As a true fifth-generation fighter Su-57 introduces advanced low observable technologies and advanced avionics, but it also needs a more powerful engine to perform in supercruise. To achieve that the aircraft will be powered by a pair of Saturn Izdeliye 30 engines specially developed for the 5th Generation aircraft.

The new engine features improved thrust, better fuel efficiency, and fewer moving parts, that, with subsequently improved reliability and lower maintenance costs will improve the aircraft performance and reliability. The second prototypes (T-50-2) fitted with the new engine on its port nacelle, made its first flight at the Gromov Flight Research Institute on December 5th, 2017 and is expected to be available for integration in production aircraft by 2025.

If Su-57 will enter serial production soon, by the time the new engine is available 60 aircraft will already be built and powered by interim 117S engines – derivatives of Saturn AL-41F1 turbofans. Each 117S develops only 32,500 lbs of thrust in afterburning (wet) mode, compared to the Izdeliye 30 that delivers 24,054 lbs dry – enough to fly the Su-57 in supersonic speed, (when lighting the afterburner new engine develops up to 39,566 lbs. of thrust). 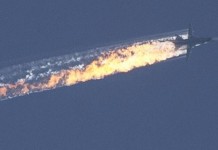