BAE Systems introduced today the fifth evolutionary variant of the CV90 infantry fighting vehicle that embeds many of the upgrades and modifications designed through the evolution of the vehicle family. With a more powerful powertrain, rubber tracks and active vehicle dynamics, modular turret and the latest electronic architecture that prepare it to assume future missions and systems. The company introduced the new vehicle at a presentation for delegates attending the annual International Armoured Vehicles (IAV) Conference in London.

The CV90 MkIV uses the new Scania engine rated at 1,000 horsepower and matched with an upgraded X300 heavy-duty transmission. The added power means the engine provides increased torque at lower RPM thus enabling better agility, and retaining high mobility even with the maximum gross vehicle weight increase from 35 tonnes to 37 tonnes. This growth will enable users to add at least two tonnes of useful payload, without a decrease in vehicle agility, and protection. According to Tommy Gustafsson-Rask, vice president and general manager for BAE Systems’ Hägglunds business, the new drivetrain active dumping can increase the vehicle’s effective speed on the severe terrain by up to 40 percent, compared to previous models. It also provides a more stable platform for the sensors and weapons. 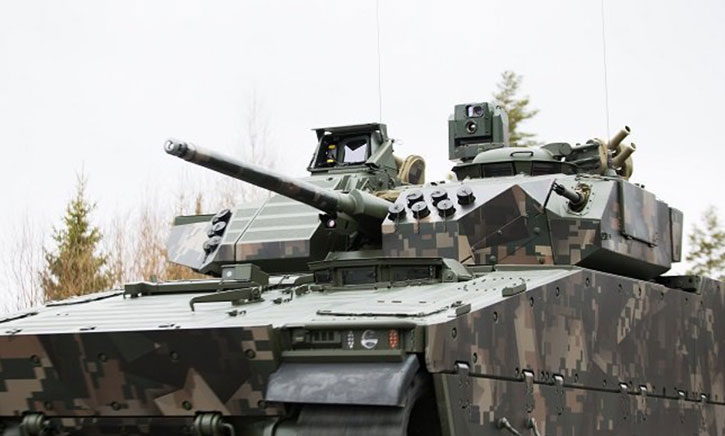 The vehicle is equipped with the D-series modular turret that can carry a range of weapon systems, including main guns of 25, 30, 35, 40, 50 mm calibers, matching different customers lethality requirements. The vehicle can also accommodate the lightweight 120mm cannon, of which a prototype weapon system has been integrated and tested on the vehicle. A choice of Optronics, coaxial weapons, and guided missiles configured into modular pods that fit on the turret sides, along with remotely operated weapon stations, defensive aids, and active protection systems that are configured with the modular turret. A ADS being integrated for the Dutch Army is the Israeli ‘Iron Fist’ from IMI. BAE Systems intends to offer the CV90 MkIV to the Czech Republic in the ongoing armored vehicle competition to replace the Czech Army´s legacy fleet of BMP-II IFVs. User countries will also be able to upgrade their existing CV90s to the new standard.

Utilizing the vehicle’s integral optronic systems and electronic architecture, the new vehicle will be equipped with processor and data bus conforming to the new NATO (NGVA) standard and supporting ‘teraflop data capacity’, to enable the future artificial intelligence (AI) and machine learning capabilities expected to mature in the future. BAE Systems also offers its the futuristic intelligent fighting (iFighting) concept as an option. Providing the vehicle’s crew with significantly enhanced situational awareness, iFighting is the company’s vision for the future complex battlefield. As part of this concept, the system utilizes BAE Systems’ Q-Sight helmet-mounted display and Battleview360 to provide the crew situational pictures using augmented reality displayed on individual visors.

Gustafsson-Rask said the MkIV will be available to both current and future users of the CV90. he CV90 is currently in use in Denmark, Estonia, Finland, Norway, Sweden, Switzerland, and The Netherlands. The CV90 IFV is a modern, adaptable, and combat-proven vehicle with 1,280 vehicles in 15 variants sold to seven nations. The most recent generation of the vehicle, CV90 MKIIIb is under delivery for the Norwegian Army.

The Norwegian CV90 MKIIIb represents the second upgrade of the CV90 MkI originally selected by Norway in 1998. The first upgraded was completed for operations in Afghanistan in 2009. The recent upgrade implemented performed in 2015 introduced the Soucy rubber track system, also used in the MkIV. Remotely operated turret was also included, enabling the crew to handle two targets simultaneously (Kill-Kill). The Norwegians were also the first to implement the Ground Vehicle Electronic architecture (GVA), and qualification to operate NATO secret communications, enabling target sharing via the vehicle’s battle management systems (BMS) and integration of UAV operation, displaying images obtained by UAVs directly on the crewmember’s displays or their transfer to other members of the unit via BMS.