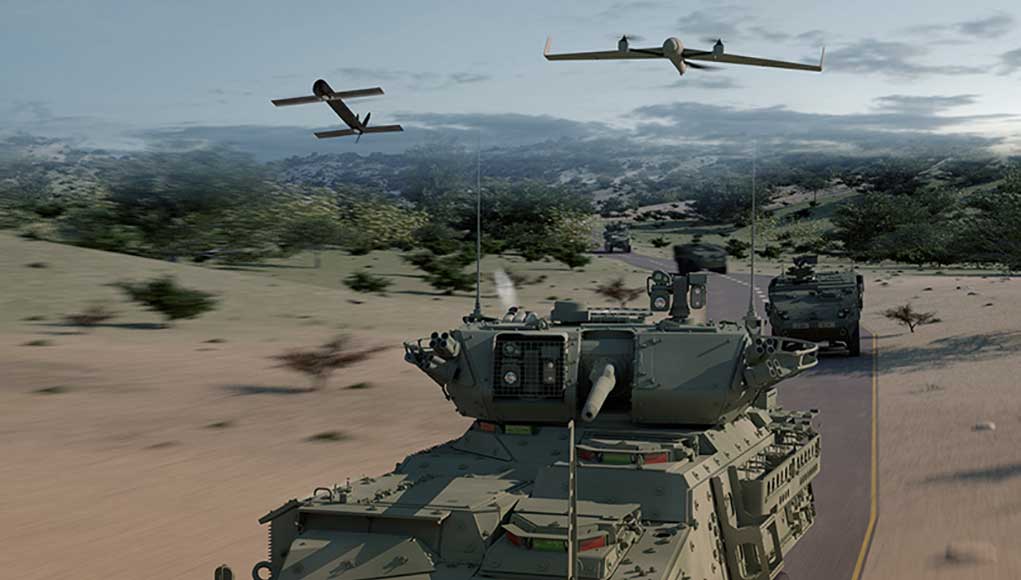 Until now small UAVs were designed for dismounted operations, by infantry or special units dedicated for the operation of drones. Recent advancements in commercial drones and their use by the military bring vehicle and drone manufacturers closer offering integrating drones with manned or unmanned combat vehicles.

AeroVironment is working with General Dynamics Land Systems to tighten the integration of its unmanned aerial systems (UAS) with GDLS’ combat vehicles. “By integrating the UAS and loitering missile systems with the leading armored combat vehicles, our team will deliver a new level of battlefield lethality, survivability and combat effectiveness,” said Kirk Flittie, vice president and general manager of AeroVironment’s UAS business. This integration will enable mounted forces to employ small drones and loitering weapons on demand and on the move. “Increased automation and decreased workload will enable the deployment of small drones and loitering missile systems by fewer operators from inside the vehicle.”

“This will be done without adding a significant burden to the soldier or vehicle commander’s cognitive or physical workload.” Don Kotchman, U.S. vice president and general manager of General Dynamics Land Systems added. Such capabilities would be particularly useful in complex terrains, such as urban areas, forests or mountains, where an elevated view of the scene provides a significant advantage.

The NGCV program will dramatically benefit from automated drone scout and precision loitering missile engagement technology tightly coupled into the GD armored vehicle electronic architecture to rapidly geolocate and, if necessary, finish targets. The ARV project has evolved well beyond a straightforward replacement for the Light Armored Vehicle (LAV) into a networked family of manned vehicles, ground robots, and drones, collectively capable of not only reconnaissance but also electronic warfare and long-range precision strikes. The vehicle is designed to launch a drone, scout deep, and then deploy precision fire and electronic warfare. It also will have an open architecture design that is upgraded with new technologies as they become available.

Two applications of this collaboration are on display in Washington DC this week at the US Army Association meeting.

Aerovironment’s Shrike 2 hybrid tricopter was displayed at AUSA 2018 mounted on a launch pad installed on top of the Striker A1 30mm turret. This turret also accommodates a 9-pack battery of Switchblade loitering weapons. Shrike 2 takes off and lands vertically, on the halt or on the move. It is available in two configurations – a lightweight tricopter designed short duration a short range, or a larger drone with a larger wing, tilting rotors and 60-minute mission endurance. Both versions have interchangeable payloads. A patch antenna supports operating ranges of more than 20 km. The Shrike 2 will be launched from the vehicle to perform surveillance missions and provide target acquisition for direct fire or indirect attack using the loitering weapons on board.

The Griffin III platform representing GDLS’ concept for NGCV carries a battery of nine all-up Switchblade loitering weapons. The 9-pack battery stores ready to launch Switchblade weapons and is rapidly reloadable. The vehicle is also fitted with the communications datalink controlling the loitering weapon. The Switchblade has 15-minute endurance. Upon detection of a target, the weapon dives to attack. If necessary, the controller can abort the strike, wave off and go around waiting to reattack. Unlike standard loitering weapons that do not provide positive post attack Battle Damage Assessment (BDA), the Shrike 2 that loiters above can provide BDA to confirm the kill. 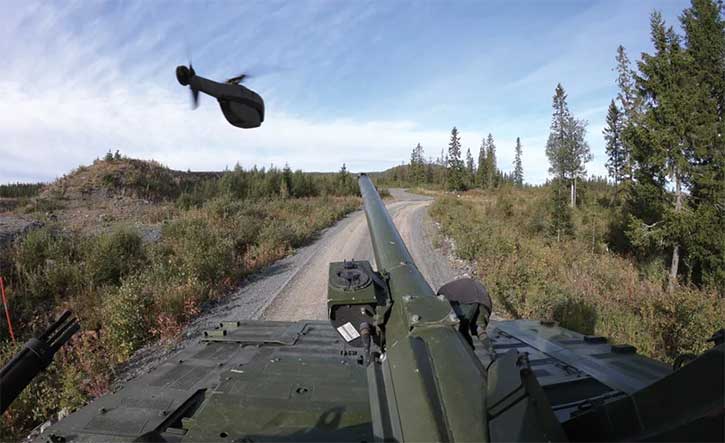 Black Hornet VRS enables the warfighter to maintain situational awareness, threat detection, and surveillance for battle damage assessment, pre-deployment and route, and point reconnaissance and targeting information without the need for warfighters to exit a vehicle.

The Black Hornet VRS includes a launch unit that holds multiple Black Hornet 3 UAVs and mounts to the exterior of any military vehicle. Once the drone is airborne operators inside the vehicle communicate with it through the vehicle’s battle management system, or directly from its own display. The complete system is easily integrated with modern battlefield management systems but can also operate independently of the vehicle platform.