The Chinese Aerospace Science and Industry Corporation (CASIC) unveiled at AirshowChina a new jet-powered, long-range UAV called WJ-700. This drone is designed for reconnaissance and attack missions over land and sea. The drone has an endurance of 20 hours. At a maximum takeoff weight of 3,500 kg, it carries weapons and payloads on four underwing hardpoints, two for each wing. Unlike other MALE UAVs that are limited to relatively light weapons, this drone carries standard air to surface attack weapons, such as the CM-102 anti-radiation missile, C701, and C-705KD anti-ship missiles. Other loads include early warning and electronic warfare equipment.

Another combat drone (UCAV) unveiled in AirshowChina this year is the stealthy Rainbow CH-7. The tailless flying-wing shaped aircraft displayed by the Chinese is similar to American designs, such as X-47 and X-45. Despite its large size – a wingspan of 22 meters and length of 10 meters, and a maximum takeoff weight of 13 tons, CH-7 is stealthy due to the smoothly curved shapes and use of radar absorbent materials. Designed for operation at subsonic speed and high altitude, CH-7 can reach a maximum speed of 0.75 Mach, cruising at an altitude of 30,000 – 43,000 ft. Its cruising speed is slower though, Mach 0.5 – 0.6, depending on the mission configuration. The drone is powered by a turbofan engine of an unknown type. The drone carries weapons in two internal weapon bays that maintains its low observable characteristics throughout the mission.

Like other drones of the ‘Rainbow’ family, CH-7 supports fully automatic operation, with mission control provided by a universal ground station. Stealth enables the drone to sustain operations in airspace dominated by enemy defenses, radars, and sensors. It can penetrate conduct reconnaissance missions or attack strategic radars, ships, missile sites, command centers, and other key assets.

The Chinese Navy is interested in unmanned aircraft for its new aircraft carrier fleet. China currently has one carrier, another is undergoing sea trials, and a third is under construction. Operating unmanned aircraft from the carrier would extend the surveillance and strike range of the surface fleet and improve its ability to maintain persistent surveillance, reconnaissance and strike missions without the need for aerial refueling.

The Chinese consider using such drones either independently, or in coordination with fourth-generation combat aircraft. The current CH-7 is designed with fixed wings for operation from a runway, but the developers already explore its use from aircraft carriers, with folding wings.

Another fixed-wing drone proposed for operation from aircraft carriers is the HK-5000G. A model of this UAV designed with folded wings was on display at AirshowChina 2018 by the Aeromarine Intelligent Equipment Company, a subsidiary of China Shipbuilding Corp. The drone is designed for maximum takeoff weight of five tons and use launch catapult, as the other aircraft on board. The drone can be used for reconnaissance and strike missions from aircraft carriers. It has an integral ER/IR payload, with weapons carried on two underwing hardpoints.

Another mission that could be assumed by those drones is Airborne Early Warning and Surveillance (AEW&S), utilizing an innovative radar array developed as a proof of concept and demonstrated by the 38th Institute of the CETC Group. Such a radar was recently flown for the first time. The JY-300 drone called ‘Tian Shao,’ a 1,300 kg MTOW drone designed to carry 400 kg of payload. Currently, the JY-300 is designed to operate for 15-hour missions, fly at a speed of 200 km/h and altitude of 25,000 ft., from a runway on land. The JY-300 can be configured with several AESA arrays, on both sides of the fuselage and wing leading edges. 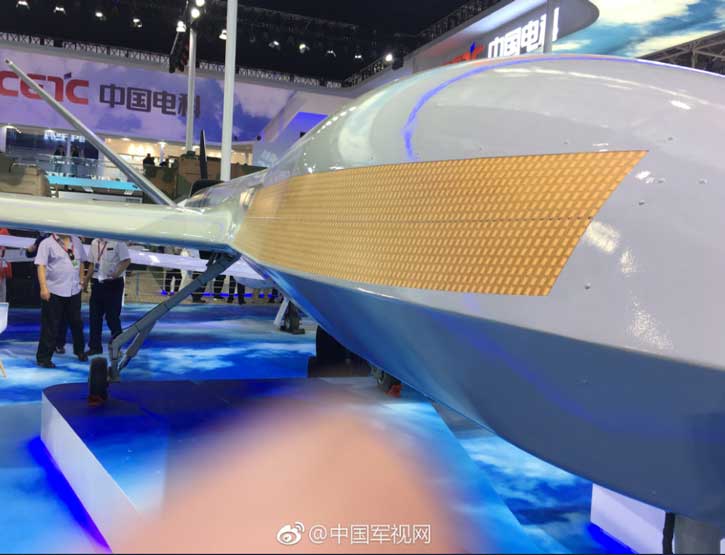 Other naval applications are also considered for another member of the Rainbow family – Vertical take-off and landing is one path, already reflected by the CH-10 tilt-rotor drone unveiled at the airshow. With VTOL capability CH-10 is useful for military, law enforcement, and civilian uses, as it can operate from small islands and small maritime platforms.

Future Chinese drones are expected to include platforms that will offer extended range and endurance, aircraft that will operate at high-altitude as well as high-speed, supersonic drones.

Some of these designs were shown in scale models at the exhibition. For example, the FL-71 platform depicts a high-speed unmanned aircraft designed for a maximum takeoff weight of three tons, designed for maximum speed of 2,200 km/h (Mach 1.8) at 50,000 ft or high subsonic cruising at 850 km/h. (0.71 Mach) at 30,000 ft, which enables the drone to carry a payload of 100 kg over 800 km on a single mission lasting about one hour, with a mission profile that could include a short supersonic dash.

FL-2 is another drone design optimized for transportation of heavy loads at high speed. At 22-ton MTOW it can fly autonomously up to 900 km/h (0.73 Mach) to a distance of 7,300 km.

The Tengden company displayed a full-size mockup of the TW-356 twin-engine unmanned aerial system designed for the transportation of heavy cargo. TW356 can be configured to carry cargo on four underwing hardpoints, as payloads configured in pods, including cargo delivery, remote sensing, or electronic warfare packages. The company also develops a variant of the drone designed for operation at very high altitudes. The largest variant, TW-765 will be able to carry 22 tons of payload up to 7,500 km.

A third drone displayed was the XY-280, claimed to be a highly maneuverable (6G), subsonic target drone designed to simulate adversary F-22/F-35 fighters. It is preprogrammed to fly a fully autonomous flight that mimics the maneuverability and flight characteristics of enemy aircraft. In this capacity it offers realistic training for naval forces and air defense missile units, To maintain the low observable characteristics (0.05-0.1 m2 radar cross-section) of those platforms XY-280 uses stealth design, including two integral payload bays that hint on its potential combat use as a stealthy strike drone. As many other target-drones, the XY-20 is launched from the ground with a rocket booster and is powered by a turbojet engine to a maximum speed of 860 km/h (Mach 0.72). Its length is 4.33 meters, and its wingspan is six meters. At an MTOW of 650 kg, it can carry up to 150 kg of payloads, including sensors and weapons, for missions up to 2 hours. The target drone is designed to sustain up to 25 sorties.