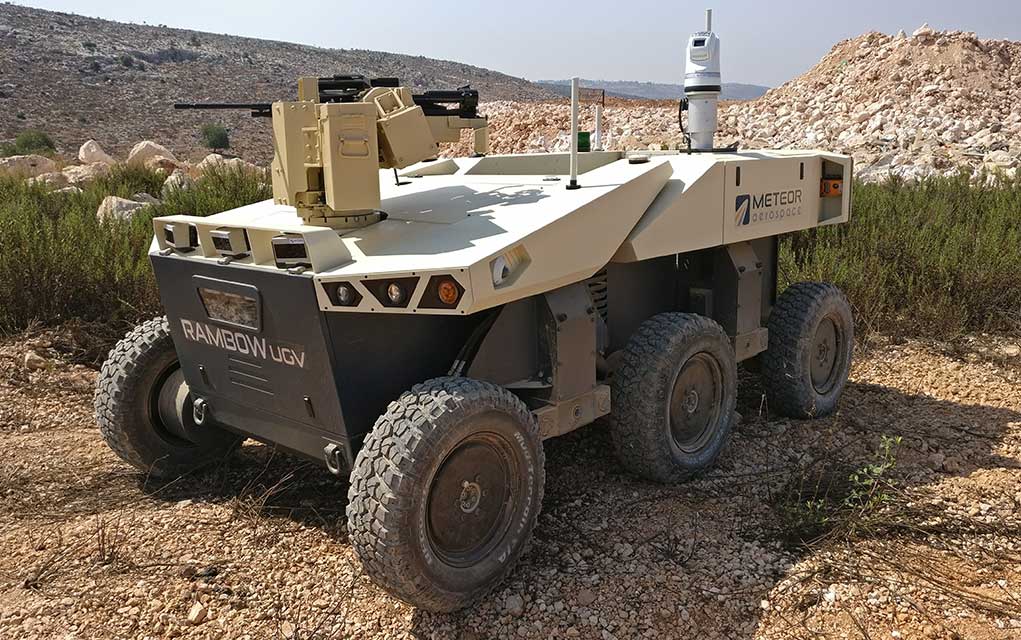 Meteor Aerospace has developed the Rambow UGV as part of an unmanned systems solution for land, air and sea applications. An electrically driven 6×6 robotic platform, of 3.5 tons gross vehicle weight, Rambow can carry payloads and cargo weighing over 1,000 ton, at a speed of 50 km/h on and off-road. The vehicle can travel 50 km on battery power, or 300 km charging its batteries with the internal diesel generator.

The vehicle uses ‘supervised autonomy,’ allowing the vehicle to travel autonomously along a preplanned route, automatically avoiding as a leader or follower in a convoy mode, or use teleoperation in more complex situations that require human attention. Rambow can travel on a gradient of 60 percent, and 40 percent side slope.

Each of the six wheels uses an electrical in-hub motor and hydraulic independent suspension to establish efficient traction, even in rough terrain, ensuring the vehicle remains stable and level to facilitate reliable payload operation.

The basic configuration that is used for security and patrol uses a mast-mounted an EO payload and weapon station equipped with its target acquisition cameras. This configuration leaves a large area of the flat deck for an additional 700 kg of cargo.

This platform can operate a small drone or UGV, loaded with a rear ramp. These unmanned systems can be used for close inspection of objects, relevant for IED and mine detection.

In such role, Rambow can be used for autonomous patrol or advanced guard, an armed scout and establish a fire support base in urban warfare. The vehicle is big enough to assume specialist roles such as combat engineering (CEV) using and dozer blade or other obstacle removal gear. Meteor Aerospace also offers a Rambow variant configured for fire support, loaded with six Marlow loitering missiles sealed in canister-launchers.