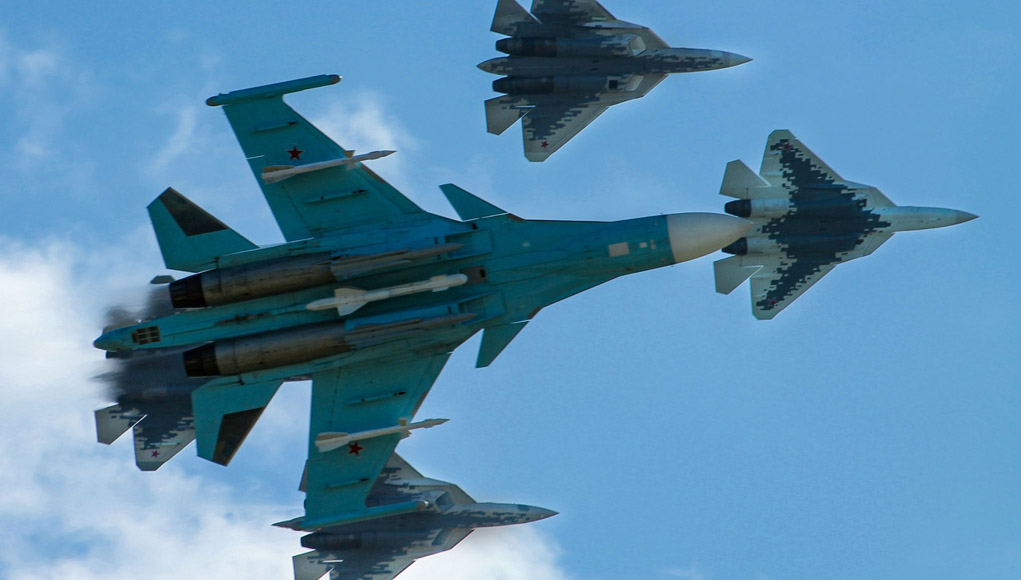 Lessons learned through ongoing military operations in Syria are shaping operational concepts, tactics, and technologies employed by the Russian military, and specifically by the Air Force and Naval Aviation.

While the deployment of military equipment decreased over time, the number of personnel rotated to support missions in Syrian increased. About a third of the active personnel of the Russian air defense forces rotated to combat deployment in Syria, two-thirds of the aircrews of strategic air forces, and almost all personnel of the military transport. Su-24 and Su-34 are the two platforms carrying most of the operational burden, with Su-24M flying over half the missions and Su-34 flying 26 percent. The remaining activity performed by Su-25 close air support aircraft, and Su-30 and Su-35 multi-role fighters each type flying about eight percent of the combat missions.

One of these priorities is the likely withdrawal from the ‘heavy/light’ platform mix that once ruled the Russian military aerospace market. Light and low-cost fighter jets have always been popular in Russia (and the former Soviet Union), represented by MiG-15, MiG-17, MiG-21, and MiG-29. Heavier, more capable but much more expensive platforms, such as MiG-19, Su-15, MiG-25, Su-27, and MiG-31 provided the core of long-range aviation and air defense capability, tasked to protect the homeland from enemy bombers.

The last generation of ‘heavy/light’ mix was the MiG-29/Su-27. The unification of Russian aerospace industries under the United Aviation Corporation (UAC) brought the long-standing competition between MiG and Sukhoi design bureaus under one roof, thus settling debates at home, rather than at the Ministry of Defense (MOD).

Furthermore, the realization that modern warfare is more about precision and measured effects, rather than grouping large masses are leaning toward the bigger, more sophisticated, versatile and mature Sukhoi (Su-30SM, 35S, and 57), rather than the MiG-35 struggling to complete flight testing and certification. MiG-35 began flight testing in 2018 and expected to complete certification in 2021. The Russian MOD committed to ordering 14, but only six were contracted so far, part of them are destined for state trials and others will eventually replace the MiG-29s of the air forces’ aerobatic team (Swifts). These orders emphasize the Russian reluctance and seem to assist exports. Egypt, Myanmar, and Bangladesh were among the interested countries.

Realizing the political cost of indiscriminate mass attacks, and their questionable outcome, Russian air operations tend to be more precise over the recent years, a trend that further reduced the use of legacy platforms such as Su-24M and Su-25SM. These aircraft were designed for conventional attack with unguided weapons, and their modernization to a level that will support such ordnance would be too costly to pursue. An exception was the installation of SVN-24/SVP-24 weapon delivery systems in Su-24M, Su-25BM, Tu-22M3 and recently in Su-34.

While 4+ and 4++ generation fighters remain the Russian the export priority, the newly exportable Su-57E variant is becoming the most advanced Russian 5Gen fighter, competing for orders from leading air forces that seek advanced 5Gen capabilities.

The export release of Su-57E represents a change of wind in Moscow since both military export agency Rosoboronexport and manufacturer (UAC) positioned 4+/4++ for export rather than the new Su-57 that has yet to match the level of stealth and performance of US and Chinese competitors. The recent commitment to field three air regiments (76 aircraft) with Su-57 by 2028 has marked the Air Forces’ new priority, representing a firm commitment by Moscow with foreign customers shouldering the burden. While the cost of Su-57 has decreased by about 20 percent, fulfilling export orders will enable UAC to maintain cost and achieve the technology level the Russian Air Force expects.

In the past, China and India were both interested in joining the development program, but after few years of cooperation, India lost interest due to lack of transparency by Russia, unwilling to share the aircraft source codes. China has also developed its own 5Gen fighter, the J-20, considered to be superior to the Russian Su-57E.

Such a move could be the introduction of Su-70B Okhotnik UCAV – unmanned combat aerial vehicle an unmanned platform being developed by Sukhoi will join the Su-57 as an unmanned ‘wingman’. The Su-70B prototype has recently begun flight test is expected to become stealthier, and eventually use the same powerplant as the Su-57, thus streamline joint operations with the Su-57.

Another new capability that could be in favor of Su-57 export is having a version of the KH-47M2 Kinzhal hypersonic air-launched ballistic missile integrated on this platform.

You have read an excerpt of the full article. Subscribe to read the full version, offering more details, images and information.