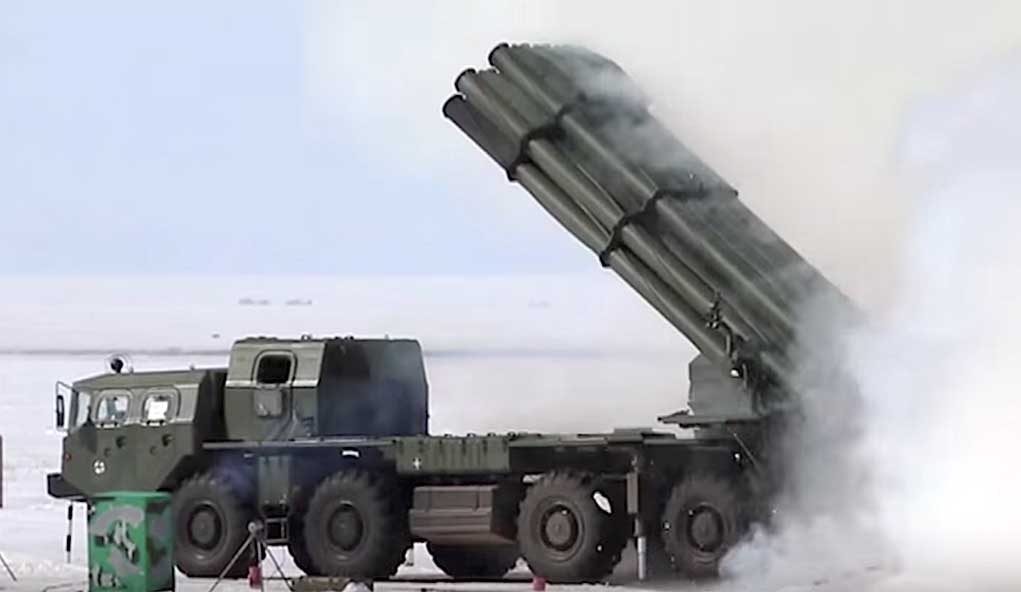 The Russian defense establishment’s perception of the place of artillery – in general, and rocket Artillery – in particular, has undergone a significant advancement over the past decade, placing these systems at a central place on the ground battlefield. This emphasis was evident at the recent Victory Parade in Moscow and at the Army Forum 2020 defense expo taking place in Kubinka this week.

The new concept, promoted since the end of the previous decade, was reiterated by the deployment of rocket formations during the Russian takeover of the Crimean peninsula (2014). This concept was endorsed by the Russian Defense Minister and senior officials in the defense ministry, and the Army, and is supported by the allocation of appropriate funds for development and fielding.

Extensive marketing activities carried out on parallel to the deployment of systems with the Russian Army, promote derivatives of new or improved combat systems to foreign customers to traditional and new customers. About 30% of the total world market needs in the artillery rocket area, supplied by the Russian defense industry (ROSTEC, ROSOBORONEXPORT, SPLAV NPO).

These include China, India, Kazakhstan, Uzbekistan, Azerbaijan, Armenia, and Belarus, Arab countries including Iraq, Syria, and Algeria, as well as new customers – including Turkey, Venezuela, and Peru.

Artillery systems centered on rockets are considered as a system of systems that encompasses target acquisition measures, including unmanned aerial systems, aiming devices, and fire control systems. Significant improvements in modern rocket systems are range extension, with most rockets reaching a range of 90-120 km. Increased accuracy is another emphasis, with the latest ordnance achieving circular error probability of 30-10 meters, relying on different guidance kits. In June 2020, a team of developers from SPLAV Corporation received the “General Zhukov Award, endorsed by President Putin, for developing the “Corrected Trajectory Smerch”.

The Russian defense ministry invests many resources in the artillery rocket industrial base and related technologies, including rocket propulsion, cluster munitions, flight computers, course correction navigation, system integration, and engineering. Regarding warhead technologies, the Russian MOD and defense industries continue to develop, manufacture, market, and sell a wide range of rocket warheads, including cluster munitions that are now excluded from the inventories of most of the western world’s armies. These cluster rockets include anti-armor, counter-mobility and anti-personnel bomblets and sub-munitions, scatterable mines, and top-attack smart munitions.

It is worth noting that modern artillery rocket systems in the Russian inventory and those recently unveiled, are based on the concept of reloading individual rockets rather than using a rocket POD. Individual loading improves the unit’s operational flexibility and agility, in firing few accurate shots, instead of expanding big rocket salvos. To assist in loading those rather heavy munitions, most of the new rocket carriers use an integral crane. The crane allows the rockets to be reloaded from any transport vehicle, eliminating the need for a dedicated ammunition loader vehicle.

The Russians focus the modernization of their artillery inventory on the following systems: 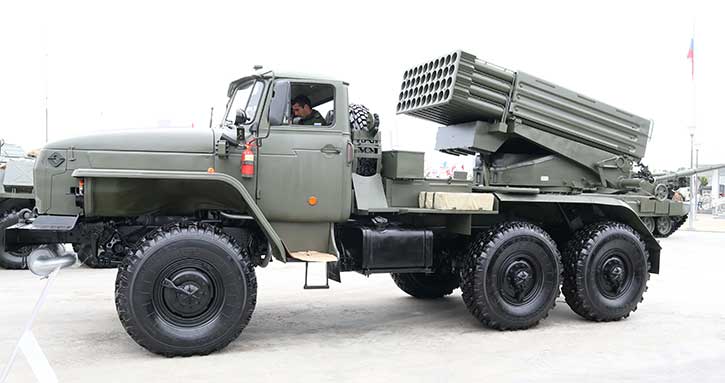 TORNADO – G 9A53-G – the latest upgrade of the classic 122 mm (GRAD, BM-21) system is mounted on an advanced 6X6 launcher-carrier vehicle. Tornado-G offers a reduced crew, increased autonomy, accelerated deployment, and post-firing disengagement. A variety of rockets, including a new reduced range (20km) with heavier warheads, are introduced. However, no data has been released about accurate 122 mm rockets of a Russian origin.

URAGAN (BM-27) 9A53-U – also known as URAGAN-1M, it is the latest variant of the 220 mm rockets carrier-launcher, mounted on an 8X8 vehicle. As far as known, it is not clear whether the BM-27 has entered series production. The improvements include an 8X8 modern platform launcher, marked 7930-MZKT. The BM-27 uses trajectory-corrected rockets. Conflicting information regarding the status of the system. According to open sources, the system completed testing, and deliveries have begun. According to other sources, no decision on launching serial production has been made. It should be noted that in none of the Victory Day parades were URAGAN (BM-27) launchers observed. This, neither in its original version nor in the improved model. Moreover, neither the launcher nor its armaments are displayed in arms catalogs or other marketing material distributed by SPLAV NPO or ROSOBORONEXPORT, further indicating the questionable status of the system.

TORNADO – S (9A52-4)- The most advanced model in the SMERCH family, BM-30 (12 rockets 300 mm in diameter). The system was first introduced in motion – six platforms participated in the Moscow parade and a similar amount in the parades in two more cities. The advanced system, still based on the traditional launch vehicle (8X8), now carries trajectory corrected rockets (CEP of 30 to 10 m) and a maximum range of 120 km.

TOS – A family of rocket launching systems 220 mm in diameter and with a thermobaric warhead. The family includes two types of tracked lunchers, using T-72 chassis (TOS-1) and an upgraded version – TOS 1A modeled on the T-90S chassis. Another version, utilizing a 6X6 wheeled carrier designated TOS 2 (TOSOCHKA), was displayed at the June 2020 red-square parade. The range was enhanced to 10 km, and the accuracy improved as well.

Hermes guided missile launcher – KBP Instrument Design Bureau unveils a truck-mounted precision-guided missile that can hit targets at a range of up to 100km with a precision of 10 meters. The Hermes guided weapon system comprises carrier-launcher combat vehicles, a command vehicle, and loader-transporter. The system can operate autonomously based on targeting information provided by unmanned aerial systems. Unlike course-corrected rocket artillery using satellite navigation, As a fire-and-forget missile, Hermes employs inertial or radio-navigation guidance for mid-course, with passive or laser guidance for terminal homing, claiming a precision of 0.5 m’ for a laser-guided strike. Hermes guided missiles are provided for land, helicopters or drones (Hermes A), and naval (Hermes K) applications. The missile employs a unique, scalable design using a two-stage bi-caliber booster-sustainer, accelerating the missile to an initial velocity of 1,000 m/sec. carrying a 30 kg warhead.

ISDM – Remote Mining Engineering System designated ‘Agriculture’ was developed by the SPLAV NPO corporation, a division of TECHMASH. This rocket system is used for remotely scattering mines, creating minefields as part of counter-mobility operations, at distances of 5-15 km from the launcher. The system consists of a launching vehicle carrying two multiple-rocket launchers, each stacked with 50x122mm launch tubes, and a reloader vehicle.

After deployment, the locations of mines are recorded with satellite positioning mapping and transferred to the forces operating in the area. The mines are specially designed for the ISDM and employ a self-destruct mechanism, thus comply with international agreements.