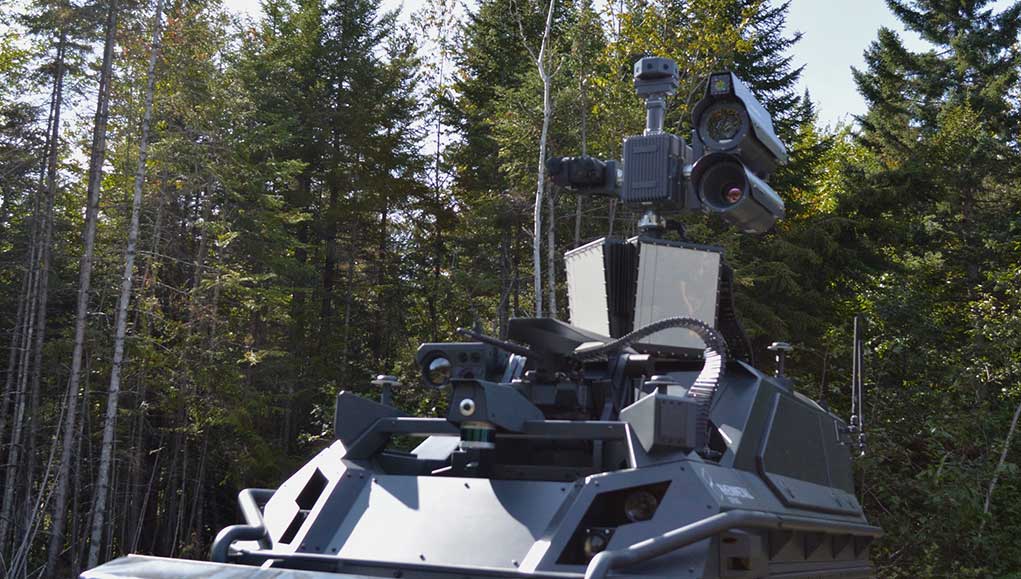 The main advantage of operating such an autonomous robotic vehicle is its crewless operation, thus enabling collecting information from high-risk areas, where the robot operates as a scout, without risking human lives. The mission payload is mounted on a 3.5-meter expandable mast with a tilting mechanism enabling the vehicle to use the system on the move or from a defilade to minimize its exposure to the enemy.

The recce payload consists of a staring radar (the configuration implemented in the prototype covers 180º using two ELM-2112 digital staring radars providing persistent surveillance over a wide area. mounted on the mast’s tip, the panoramic full ring camera provides additional surveillance covering 360º. A dual EO/IR camera payload investigates suspected objects detected by other sensors, sending targeting information back to the operator. A laser rangefinder and designator help to locate the targets and engage those targets with indirect or direct fires from other platforms. In the current configuration, the vehicle mounts Rheinmetall’s own Fieldranger Light 7.62mm weapon station, controlled remotely by a human operator. 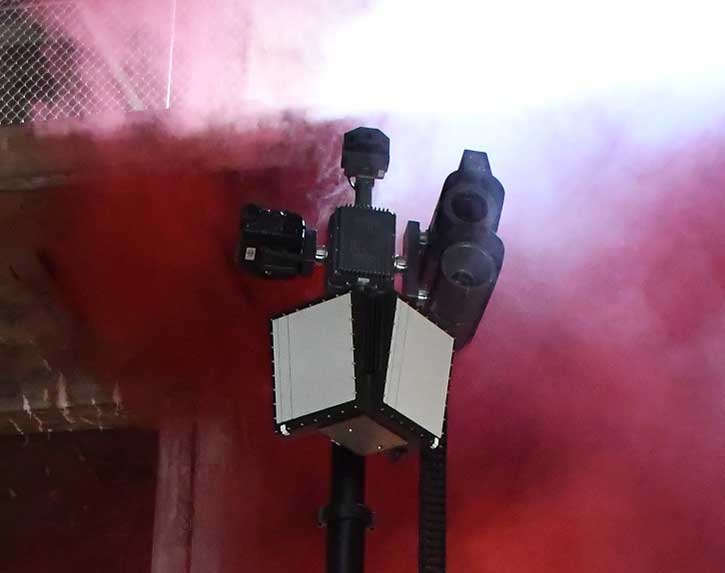 The electrically-powered Mission Master platform weighs 1,100 kg, including batteries, carrying up to 600 kg of payload. All Mission Master variants, including the Recce vehicle, can be transported on rail, transporters, and sling loaded under CH-53 or CH-47 helicopters. Rheinmetall has also developed a transportation cage that enables heavy transport helicopters deploying two vehicles on a single airlift. The platform is also amphibious, able to swim at 5 km/h, carrying 300 kg.

Rheinmetall is improving the amphibious capability of the Mission Master, introducing the new amphibious variant by mid-2021. The vehicle can operate for eight hours or travel at 20 km/h over 140-160 km with batteries fully charged. However, in recent operational tests, the vehicles operated for more than 24 hours between charges, as the electrical power draw is rarely at peak levels most of the time. For extended missions, the vehicle can be fitted with a small gasoline engine generator for battery charging.

The robotic vehicle owes its autonomy to Rheinmetall’s PATH autonomous vehicle kit designed specifically for military autonomous vehicles. PATH enables users to teleoperate the Mission Master using tablets, smartwatches, or handheld controllers or computers commonly used with soldier systems. These devices enable full access to advanced PATH features such as follow-me, convoy, and autonomous navigation modes. Each control mode incorporates multiple layers of protection to ensure that the vehicle operates safely at all times. The Armed Reconnaissance version is already networked to the Argus soldier system and Rheinmetall Command and Control Software, installed in any user’s battle management system. For autonomous navigation, the system relies on artificial intelligence and machine learning to learn the terrain and topography of the operation area (urban, desert, woodland), thus improving the ability to reason and understand objects, obstacles, and movement strategies. 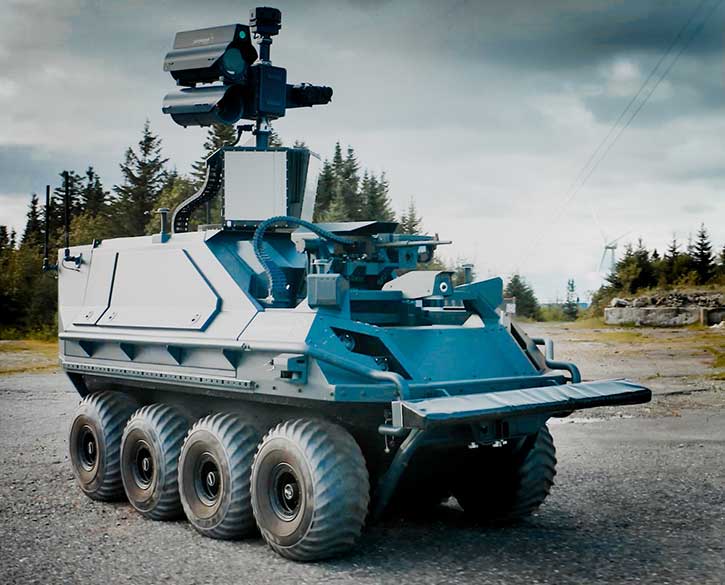 The vehicle features a radio-agnostic architecture, enabling users to integrate their radio of choice to meet their sovereign communications systems. The radio enables the Mission Master operator and the robot to conduct bi-directional communications, enabling remote control, communicating with other robots, and a higher command post.

While the operator controls the robot from a distance and receives the scout information, the robot can conduct autonomous navigation and movement and autonomously perform some of the surveillance tasks according to the mission planning. On the mission package, AI is also employed to improve surveillance, detect changes, follow different behaviors of objects and tracks, to assess or determine intentions. Some of these reconnaissance and surveillance functions are already developed and tested (TRL-8), while remote weapon station autonomy (not including actual firing) still under development (TRL-6). As to autonomous weapon firing, Rheinmetall emphasized it is committed to keeping a man in the loop in all kinetic operations, assuring that a human decides when to open fire, never a machine.

Power of the Wolf Pack

This autonomy level takes the mission master a step closer to Rheinmetall’s fully autonomous ‘Wolfpack’ concept, where a squad of robots commanded by a single human operator is ready to perform combat missions.

The Wolf Pack consists of multiple Mission Master vehicles operating as a team to perform specific missions such as zone surveillance, reconnaissance, or perform specific team tasks – target position transfer or multi-platform slew-to-cue. To accomplish such teamwork with all units, communicate with each other, and use artificial intelligence to maintain the total situational awareness necessary for carrying out their missions.

The Wolfpack differs from the Wingman concept pursued by the US and Australian military, in its focus on mission autonomy. While the Wingman comprises one or two vehicles closely controlled by a human operator to form a combat team, the Wolfpack leverages a group of 2-6 robots ‘herded’ by a single operator from a remote command post or command vehicle. Therefore, a single operator can manage the entire Wolf Pack from anywhere, using the LTE network, SATCOM, or a military cloud. It is an intuitive concept that enables one operator – rather than a crew or multiple uncoordinated operators – to focus on the overall mission rather than managing all the tasks of each A-UGV. In the prototyping phase (TRL-6), Rheinmetall plans to demonstrate the concept within a year.

The new Armed Reconnaissance module is the latest addition to the modular Mission Master family, widely acclaimed for its all-terrain maneuverability and ability to keep troops safe when deployed in harm’s way. The Cargo module can carry over half a ton of supplies, relieving troops’ burden keeping them fresh. The Fire Support modules boost dismounted units’ combat power, while the Rescue module autonomously evacuates casualties and carries specialized equipment for medical interventions in the field. Also, every single module is equipped with a Blue Force tracking system that is fully compatible with NATO standards. 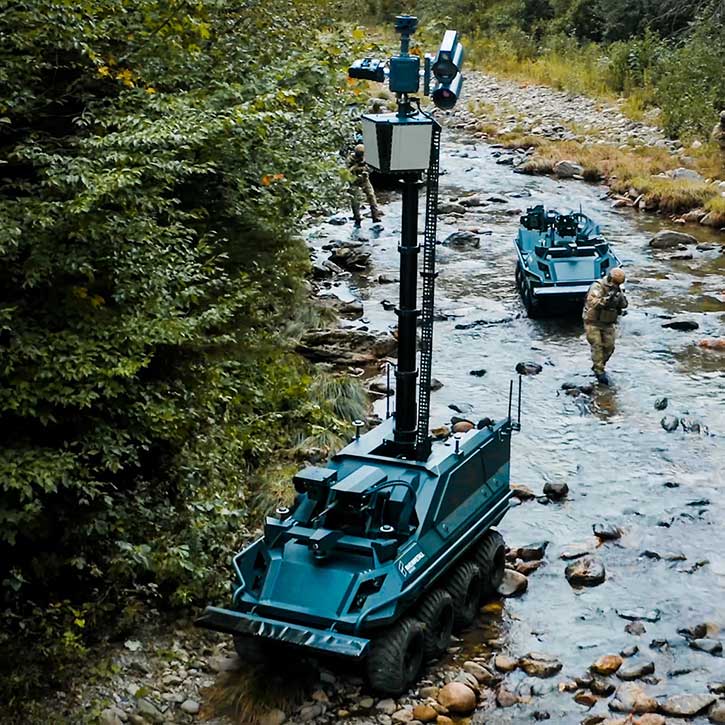