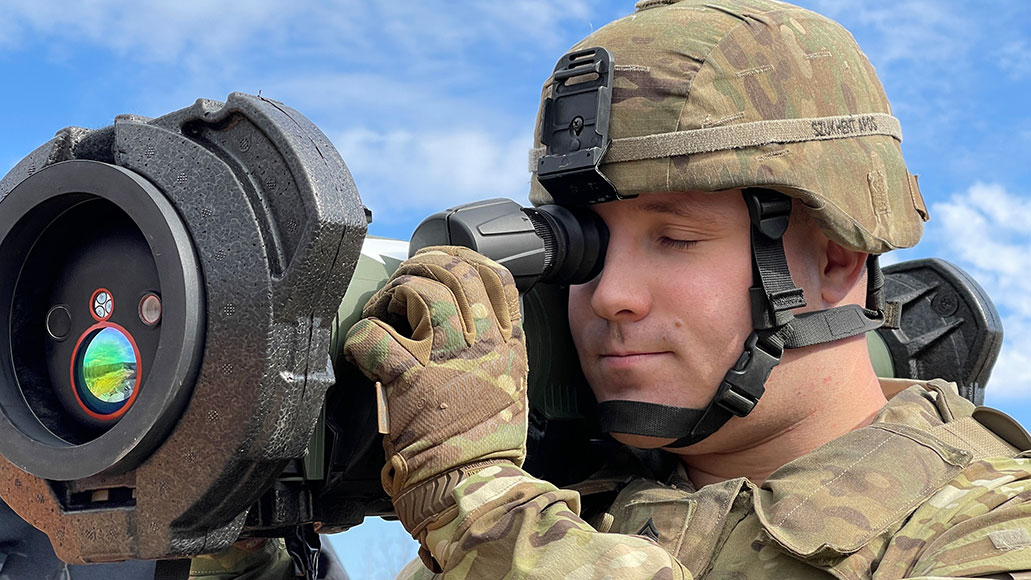 Updated – 9 February 2021: Rafael Advanced Defense Systems Ltd. has demonstrated the SPIKE SR Short Range guided missile at the Army Expeditionary Warrior Experiment (AEWE) 2021 earlier this month. The demonstration assessed SPIKE SR as a precision munition system for infantry squads, for which portability and simplicity of operation are essential. AEWE also assessed the system for its ability to allow close-combat formations to dominate the operational environment and handle new threats in a near-peer conflict. Live SPIKE SR missiles that were used during the demonstration, hit both static and moving targets in a day (EO) and IR modes, overcoming challenges that included overcoming battlefield obscurants that eliminated the target from the field of view.

Designed to increase lethality at the infantry squad level, the weapon provides a lightweight (10 kg), shoulder-fired munition, with an enhanced range of 2000 meters. The fire-and-forget operation and ease of use as a fully enclosed ‘wooden round’ allows lower echelon infantry to rapidly qualify and sustain firepower and a high level of operation with minimal training. During the assessment, soldiers received instruction on the operation of the weapon, including indoor and outdoor training. US Army evaluators provided positive feedback on the system’s lightweight, lethality, and ease of use compared to what is currently in use by the US Army. “This light-weight system can greatly enhance squad-level soldier lethality, a core capability of the Army,” said LTG. (Ret.) Joe Anderson, President and CEO of Rafael Systems Global Sustainment (RSGS), “AEWE was an important opportunity to demonstrate SPIKE and multiple other Rafael systems.” Gen Anderson added. The demonstration was part of a larger demonstration of Rafael technologies, including BNET cognitive broadband IP Software Defined Radio and the Fire Weaver Sensor-to-Shooter information system.

The Army currently uses the FGM-148 Javelin system to engage targets at the same distance as the SPIKE SR. The Javelin was first deployed in 1996. The main difference is a Javelin system weighs 22.3 kg, more than two SPIKEs. It also uses cooled IR imagers, which are much more expensive than the SPIKE’s uncooled seekers. The FGM-148F version currently in production was improved with a multi-purpose warhead, but the introduction of an uncooled seeker is planned for the next spiral development version known as FGM-148G.

Fire Weaver integrates as an open and modular software application with existing battle management systems and other tactical computing devices. Fire Weaver enhances ground combat capability with enhanced situational awareness and the ability to maximize available combat power in GPS-denied environments. It networks sensors and formations together, providing a shared understanding of a fully digital common operational picture (COP) enhanced with augmented reality of battlefield intelligence. The result is intuitive situational awareness and common visual language “on the sights” of the battlefield for commanders and soldiers and enabling them to close sensor-to-shooter loops in seconds.

“Fire Weaver provides the US Army infantry a marked advantage in overmatch. This proven and capable technology is available today for high maneuverability, survivability, and lethality,” LTG (Ret.) Anderson added, “We look ahead to work with the Army on modernization challenges against our future and peer threat adversaries.” Following AEWE 21 demonstration and assessment, Army senior leaders discussed Fire Weaver and other Rafael enabling technologies for inclusion in future Army Live Prototype Assessments under the Joint Modernization Command such as AEWE 22 next January, the Maneuver Fires Integration Experiment, and Project Convergence 22. In early 2020, Rafael received a contract from the Israeli Ministry of Defense to supply Fire Weaver to Israeli Defense Force (IDF) ground divisions.

RSGS, supported by Rafael, organized the demonstration for the assessment. The experiment was managed by the U.S. Army’s Maneuver Battle Lab and U.S. combat veterans from the 1st Battalion, and 29th Infantry Regiment, also known as the EXFOR, participated in the assessment. The event was well attended by senior US Army officials, including from Army Futures Command: the Maneuver Center of Excellence, and the acquisition community. The soldiers who operated the Fire Weaver systems received half a day’s training and operated the systems by themselves, commenting on its intuitiveness the difference it would make in combat.

Although this assessment was the first live-fire demonstration of SPIKE SR on US soil. In 2019 the US Army has integrated the Spike NLOS on its AH-64E Apache Guardian attack helicopter. The weapon will be used as an interim long-range weapon, enabling the helicopter to engage targets at a range of 30 km and beyond the line of sight. In 2012 the US Navy has test-fired the Spike LR missiles on an unmanned boat, as part of evaluations for the Special Warfare Program Office.