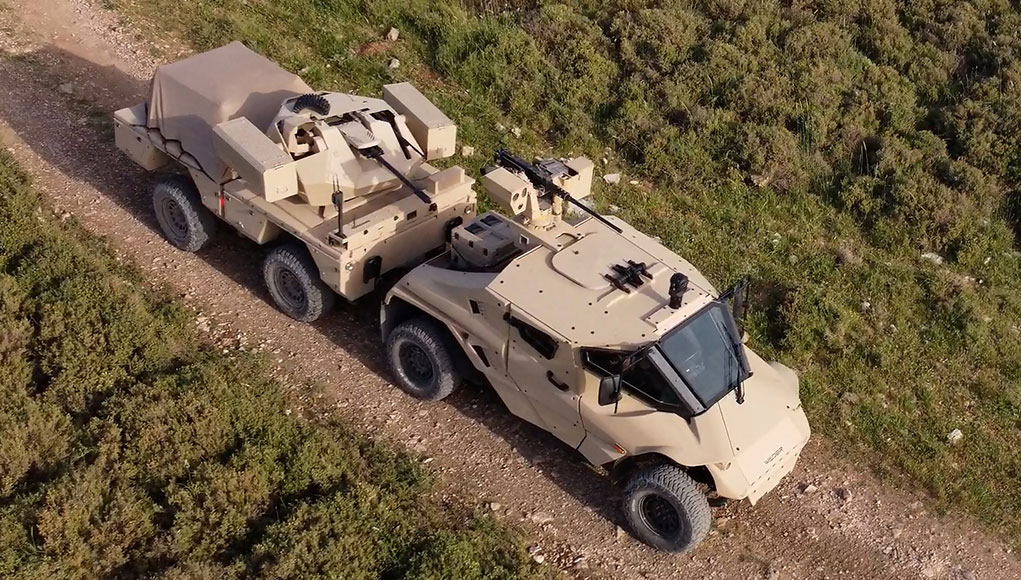 Plasan is expanding its range of combat vehicles adding new platforms every year. This year at Eurosatory 2022 the company is introducing a new version of a light armored vehicles called Wilder. Representing a new automotive concept, Wilder represents a shift from the traditional armored vehicle design based on commercial chassis. The new vehicle is designed for special missions, providing excellent offroad mobility, good armor protection for the crew compartment and up to 800 kg of payloads. While the Wilder and AteMM were developed separately, the two platforms offer unique advantages when coupled together.

According to the vehicle designer Nir Kahn, Wilder was conceived as an ultralight armored vehicle moving four soldiers. Unlike the Stinger that was based on a modified hmmwv chassis, Wilder repreents a clean shheet design. “We are using 4×4 all-wheel drive, with a center, front, and rear differential locks, enabling excellent stability on the road, with extreme maneuverability off-road. To improve maneuverability in confined space, Wilder can be fitted with front and rear steering to perform in narrow urban terrain. As an off-road armor-protected vehicle Wilder demonstrates impressive performance in climbing a 400mm vertical step, 80% vertical slope, 54% side slope, 600mm trench crossing, and fording 600mm of water.

The vehicle has a structural integral ‘bolt-on’ protection capsule with advanced composite armor and large transparent plates meeting STANAG 4569 Level II. The armor is provided as a ‘kitted hull’ ensemble bolted onto the monocoque capsule, thus enabling field replacement, and upgrading of the protection system. The spacious cabin is configured with the driver seated in the center, having unobstructed forward and side views, with three troop seats on the side and center rear, enabling the three soldiers an adequate coverage of all angles with an overhead view provided by the instrumented sensors and RCWS. This configuration is also used in the new Scarabee from Arcuus, but Plasan’s Wilder provides it at less than half the weight of Scarabee.

The structure has sub front and rear frame systems, ensuring the vehicle stability and safety during four-wheel-drive driving at high speed on and off-road, in mud and snow. The vehicle uses the REGO REX independent suspension that provides extra ground clearance and a smoother ride on all types of terrain. The system is coupled with specialized axles and differential that doubles the wheel travel, allowing the vehicle’s high off-road performance. The Wilder uses a Cummins R2.8 Turbo Diesel with 161 HP output. With a curb weight of 3.7 tons and a Gross Vehicle Weight (GVW) of 4.5 tons, this engine delivers a power-to-weight ratio of 36 HP/Ton, an unprecedented ratio for armored vehicles. The vehicle can carry 800 kg of useful payload on the two subframes supporting a forward mount and 1.7 m2 flatbed at the rear. A roof-mounted rigid mount is designed to carry light weapon stations and optronic sensors. “Before Wilder, these specifications could be addressed by armored vehicles weighing seven tons,” Kahn added.

At Eurosatory, Wilder is shown with an autonomous UAV launch and retrieval system from Easy Aerial, operating the Wolverine and Xtender mini drones from Xtend.

Another optional addition is the AteMM electrically powered trailer. AteMM is not a conventional trailer. As an electrically powered wheeled system, it transforms the Wilder becomes a much more powerful 6×6 hybrid-electric platform, increasing the useful payload-carrying to two tons. Mounting weapon systems on the AteMM enables weapons systems integrators to offer numerous applications without any changes to the Wilder.

Since Plasan developed the two vehicles simultaneously, the Wilder and AteMM share some physical, automotive, and electronic commonalities enabling optimal operation of the two systems. They share the same height and suspension systems, and the AteMM controls are embedded in Wilder’s operating console allowing complete control of the AteMM without any preparations.