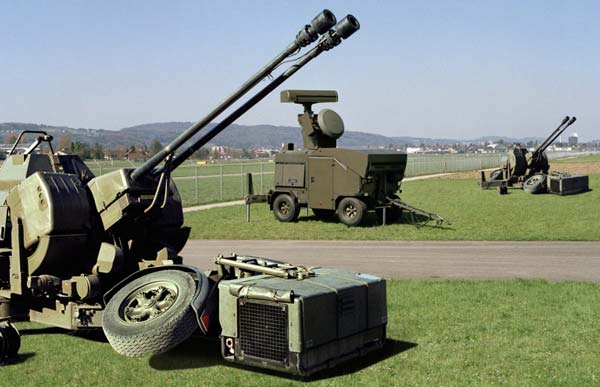 AHEAD technology, developed by Oerlikon Contraves improves the capability of air defense guns such to engage and destroy aerial targets, from large aircraft to small targets such as missiles or PGMs. The gun fires short, 24 round burst of high velocity Ahead rounds aimed at the target’s intercept point. Every projectile is programmed by a muzzle based electromagnetic inductor, which sets an electronic timer to activate and separate the projectile into 152 heavy tungsten metal spin-stabilized sub-projectiles (3.3 gram each), forming a lethal cone shaped metal cloud, placed ahead of the target in its flight path.

AHEAD is designed to fit existing Skyguard air defense systems, operating twin 35/1000 rpm revolver cannon and Super-fledermaus. The manufacturer claims a very short response time for the system, as low as 4.5 seconds from target detection to firing. With the addition of AHEAD modernization, existing Skyguard fire are fitted with the fire control subsystems which enable the system to be operated as a stand-alone gun or in a “fire unit network”, separated up to three kilometers from each other. The fire units can exchange target search and track data at a fast rate, and share a common, full hemispherical situational picture to facilitate optimal target engagement by each fire unit. AHEAD technology is available today for naval Close-In Weapon Systems, as well as the remote controlled, point defense gun mount and mobile battlefield air defense systems, both are lightweight systems, transportable in a C-130.

The 30mm AirBurst Munition (ABM) is currently being qualified for the German Army for deployment with the Mk30-2 ABM cannon mounted on the Puma AIFV. A 35mm version optimized for ground-to-ground effect is being qualified for the Bushmaster III chain gun mounted on the new CV9035 IFV of the Royal Dutch Army. Denmark has also selected the ABM capability for its CV9035.

The ABM concept is also highly suitable as a Counter-Rockets, Mortars and Artillery (C-RAM). During the last year (2005) the Skyshield 35mm systems with ABM munitions were tested in the US and Germany and evaluated against typical C-RAM threats. Further trials are underway. The Israeli Ministry of Defense also evaluated the ABM solution for C-RAM.