Pointer, which has been in service with the US Army and Marines since 1989, have seen action in Afghanistan and Iraq, operated by the US Special forces, enabling organic aerial surveillance capability at the SOF team level. The 2.5 m’ wingspan glider-like airplane weighs 4 kg, powered by a 300-watt electric motor, has proved the usefulness of a mini-UAV that can operate close to front lines. 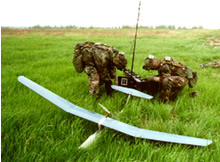 The Pointer uses day camera or a 8-12 micron Flir for night/low visibility conditions, and can fly missions for up to 90 minutes. The images taken by the UAV can be viewed in real-time with a ground-control station, giving warfighters an aerial picture of their surroundings. A Pointer system comprises of two aerial vehicles and a single ground station. So far SOCOM has purchased 60 sets. According to post war plans, Pointers will be allocated to every A team in the active SF units, Pointers were used during the recent conflicts for force protection and site surveillance before teams ingress.

In order to accommodate requirements for smaller, lightweight systems, the Pointer system was redesigned to accommodate a smaller ground station (less than half-size of the original system), The airframe and wing span were reduced. The new man-portable version is called Raven and has the same payload as Pointer. The aircraft fits in two packs that weigh a total of 4.30 kg. Endurance is about 80 min. Like Pointer, a joystick can mark map waypoints or directly control the aircraft. AeroVironment is also working on a larger version of the Pointer, called Puma which will be able to carry heavier payloads for extended missions of 2.5-3-hours.