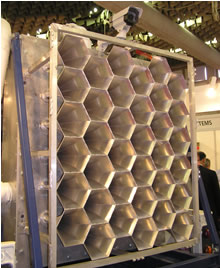 Other exhibits focused on the employment of less than lethal weapons. Such systems are developed by IMI, including Stun Cartridges (SC) for 120mm tank guns, which enables tanks to use their main the armament in complex MOUT situations, reducing collateral damage. Other types of grenades presented here were CS rifle grenades which enable infantry to deploy CS at twice the range of existing hand grenades and mortars. Various types of multi-effect CS grenades and “Sprinkler” type CS canisters were also unveiled by Ispra, as part of their arsenal of less than lethal crowd control systems.

A different concept for a non lethal crowd control was demonstrated by EROD. The company developed an acoustic phased array system which can incapacitate humans from a standoff range, by applying high power acoustic load. The system can be mounted on a tactical vehicle, and radiate a narrow, high power steerable acoustic beam, disorientating humans. The high power is inflicted on the target by coherent superposition of the acoustic outputs from 36 horns. Both horizontal and vertical beams can be formed simultaneously to create a point effect within buildings.