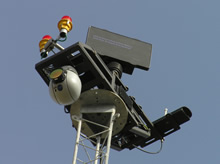 everal Israeli companies are focusing many efforts at the newly established buffer zone, (erroneously known as the “wall” separating occupied territories controlled by the IDF, as well as some Palestinian Authority managed regions from Israeli territory. Many companies have developed systems for the protection, surveillance and defense of this obstacle. Two are constructing the obstacle system – Magal Security Systems, which already constructed 140 km of the buffer zone in the Northern and Central region, and Elbit Systems, which is currently extending it into a section cordon, around Jerusalem. Magal is currently offering to enhance the basic sensors of the fence with video cameras integrated in every segment. A different concept is the EO passive radar system, promoted by Magna Ltd., developers of a passive radar system, based on stereoscopic video motion detection system. Such systems can effectively provide early warning on suspicious activities within the sterile zone and beyond. Other systems, such as ground surveillance radars can provide similar coverage, even under adverse weather conditions, but at higher cost. A covert, passive device designed to detect human activity is the “Virtual Fence” sensor array, combining acoustic, seismic and IR sensors. This unattended, covert sensor array can detect, locate, and identify human or vehicular activity over a large protected area. Another type of sensor, the Unattended Ground Sensor (UGS), developed by Seraphim is already deployed by the IDF and has recently been tested by the USAF.

Elbit has demonstrated a wide variety of systems designed for operation in the buffer zone. These include various long-range observation systems, including the LOROS system, which is widely used in the IDF, the Lotus G thermal observation system, capable of identification of targets at ranges beyond 20km, as well as mobile platforms, such as the Mil-Tomcar rapid response all terrain vehicle, which is fitted with an elevated EO payload and communications equipment, transmitting images to sector command center. Elbit is also proposing the tethered aerostat developed by TopiVision, as a surveillance system which can be pre-positioned at specific points or transported to fill temporary “gaps”. The aerostat was used extensively in several incidents supporting for the Israeli police, and is currently equipped with a stabilized EO payload offering x100 power zoom.

Several companies are offering dedicated the sensors for the buffer zone. RAFAEL is promoting its proven TACS system, which is already operational along Israel’s Northern border with Lebanon. The system uses a variety of airborne, ground mounted, and unattended sensors to provide a tightly integrated security zone designed to defeat any infiltration through the border or meditarranean coastline.

Airport perimeter security in the U.S. – a declining market 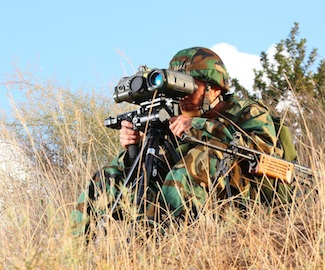