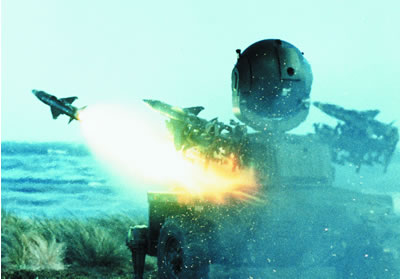 JERNAS system, also known as Rapier FSC is a mobile, low altitude and point defense system designed to counter airborne threats including UAVs, and stealth cruise missiles as well as fixed and rotary wing aircraft, in all weather and extreme electronic warfare environments. The system utilizes a launcher armed with eight ready to fire Rapier Mk II missiles, and an integral electro-optical surveillance and tracking system. The unit also use a 3D surveillance radar which can handle 75 targets simultaneously, with automatic prioritization of targets for engagement. The radar tracker uses an ultra-narrow beam width to allow effective tracking under difficult conditions. The system is claimed to be effective against smart munitions and saturation attacks.

When used with the EO tracker, the radar tracker provides a dual engagement capability to improve the system’s immunity to countermeasures. Multiple launchers can be networked over a combat net radio to cover a wide area by multiple surveillance radars. JERNAS systems are deployable in a C-130 and can join maneuver forces to offer high mobility over land, to support rapid reaction forces. Two British Army air defense units and three RAF Squadrons are currently equipped with 60 Rapier FCS units, which are scheduled to remain in service at least until 2020. The system was selected the system in 2002, to equip a new air defense regiment of the Malaysian Army, scheduled for operation by 2005.