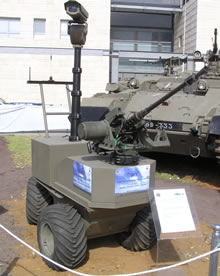 This radio controlled system operational system demonstrates high cross-country mobility and payload carrying of up to 500 kg, including a TV camera and weapons mount, such as the 0.5″ machine gun as demonstrated at LIC 2004.

The platform uses an All Terrain Vehicle (ATV) chassis and carries a remotely controlled weapon mount and sensor payload. Both payloads can be separately controlled by the operator, or slaved to the camera line of sight. ROEE can rapidly deploy firing elements and sensors to positions located at high risk, exposed locations, thereby reducing the risk to soldiers without risking the mission. The robot can be integrated in a security system, as a part of perimeter defense system, or be deployed as an ambush platform, to monitor, and secure enemy susceptible movements paths.