TERRIER is jointly produced by the German Krauss-Maffai Wegman company and Iveco, from Italy, which supplies the chassis and engine. The vehicle has a large open space cabin, fitted with two side doors and a large read door for rapid dismount. Terrier is capable of comfortably accommodating 6-8 fully equipped troops. The Terrier can be used as a troop carrier, command and tactical logistic vehicle, for patrol, escort, reconnaissance and logistical support missions. The vehicle is constructed with a bullet proof (7.62×51 cal) and fragment proof protected cage, and is fitted with a floor which defeats AP mines (including the DM31 bouncing mine). Critical components such as the fuel tank and batteries are well protected. The vehicle can be equipped with a roof mounted firing hatch, where a machine gun can be mounted for self-defense. Three firing ports are also installed on each side, with additional ports at the front and rear. Fire extinguishing system is also provided for the engine and tires. 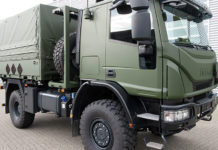 Iveco to Supply New 4×4 Trucks for the German Army