Phraselator is a truly mobile PDA based translator which can be used by foot patrols and combat teams, developed by VoxTech. The system uses a Intel XScale 400 PXA255 processor running Windows CE powered pocket PC, loaded with 1,000 spoken English phrases and their local language equivalents. US troops in Afghanistan and Iraq have used this device for humanitarian assistance, in medical, security, travel, and law enforcement assignments.

Another translation application adapted to combat use is the Forward Area Language Converter (FALCon), an Optical Character Recognition and machine translation system integrated on a portable computer (laptop PC) for translation foreign languages documents. the system was designed and developed by the Army Research Laboratory, based on National Security Agency (NSA) know-how. It provides the Military Intelligence Community a quick and reliable way to translate and analyze captured documents. FALCon can translate up to 47 languages including Arabic and Asian languages and is being used in both Iraq and South West Asia. 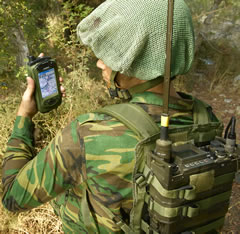